Serene, from Gulf to Bay, at Excelsior 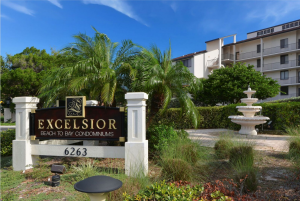 A tornado came from the Gulf at 3:30 a.m. Jan. 17, 2016 and bore down on Excelsior Beach to Bay Condominiums. Several storms landed in the area that evening, including the tornado that hit Excelsior condominiums on the Gulf before crossing Midnight Pass Road and then damaging the community’s bayside area as well.

But more than a year later, the Gulf to Bay community that had been known for its impeccable grounds is now “more beautiful than ever,” says unit owner Chuck Lannon. Several projects to make repairs and improvements to damaged buildings were wrapped up in October.

Much of the lush landscaping, including bottlebrush trees, along a bayside tropical pathway was spared, said general manager Dan Watnem, and other impacted landscaping has been replaced or will be replaced soon.

“If you didn’t know there was a tornado, you would never know it,” Watnem said.

The serene community has 166 two and three-bedroom condominium units throughout 14 acres. There are approximately 8 acres of common space on the property that spaces Gulf to Bay, said Realtor Bob Ruiz, of Key Solutions Real Estate. “Bayside units reside in a park-like setting with fountained ponds beautiful treed grounds, and a lovely pool,” Ruiz said. “The Beach (Gulf) side units are equally lovely.”

When Lannon and his wife come to Siesta from their suburb outside of Buffalo, New York, they most look forward to the sunshine.

And that carries into their two-bedroom, bayside unit they have owned for about three years. “There is beautiful sunshine all throughout the unit,” Lannon told Siesta Sand. 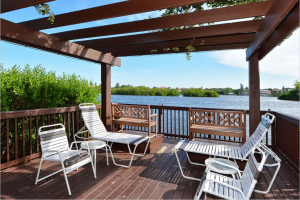 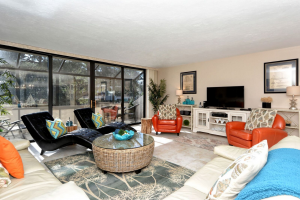 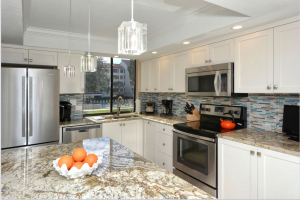 Lannon says it is 150 steps from his unit to the beach. That’s part of the reason why the Lannons are spending more and more time at Excelsior.

Amenities at Excelsior include 2 heated pools with spas, tennis courts, pickle ball courts, shuffleboard, clubhouse with fitness and of course, a private beach. All units have free WiFi.

The mid Key location, at 6263 Midnight Pass Road, is walking distance to shopping, boat rentals, and restaurants nearby, including the soon-to-open Daiquiri Deck restaurant and coffee shop planned for a new three-story building. Lannon said the new restaurant will be a “pretty cool” addition to the area.

Excelsior has a rental program for investment owners to use, and about 80 unit owners rent out their unit, said Watnem. The other owners are seasonal or permanent residents.

• Two, two-bedroom units sold over the past year; both sales were in February.

In the middle of the price range, a two-bedroom beachside unit with updated kitchen and baths is listed for $679,400, or $493 a square foot.

A bayside unit, with 1,306 square feet, is listed for $524,400, or $402 a square foot. The unit is full of numerous upgrades, from clerestory windows and glassed lanai to kitchen with granite and stainless appliances. The breakfast bar was redesigned to create a true open floor plan, perfect for entertaining, according to the MLS listing.

A two-bedroom 1,435 square foot beachside unit is listed for $884,900, or $617 a square foot. Features include new furnishings, plantation shutters, and hurricane windows.

One of the new listings is a bayside unit with 1,456 square feet that is on the market for $495,000, or $340 a square foot. The well maintained unit has tiled flooring and an updated kitchen.