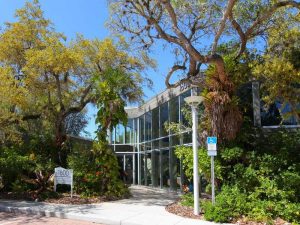 Yet not everything is brand new at Summer Cove. The former, iconic Summerhouse restaurant was preserved when Summer Cove was developed, and it now serves repurposed life as a clubhouse for the condo community. The restaurant building, which stands out with its glass walls and surrounding gardens, was saved when Snavely Development obtained a height variance for the tall condo building in return for saving the Carl Abbott-designed former restaurant building. In 2007, the Florida Trust for Historic Preservation and Sarasota County awarded Snavely Development a historic designation for the preservation of the Summerhouse building, which was built in 1975 and is associated with Sarasota School of Architecture.

“I love that we are part of that [historic fiber] of the area,” Sue Dietrich, who has been a seasonal resident in Summer Cove since 2009, told Siesta Sand.

“It is still very beautiful,” Dietrich said of the former restaurant building. “The condo association has done a good job maintaining it.”

The repurposed Summerhouse space houses state-of-the-art fitness equipment and a gathering place where Christmas and Super Bowl parties are held for the condo complex. 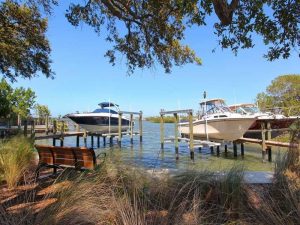 Other draws that led Dietrich and her husband to Summer Cove include the relatively small community size of only 45 units, the spacious condo interiors, and the community’s location right on the Intracoastal waterway and Little Sarasota Bay. “It’s breathtaking when you look through the balcony and see the waterway,” Dietrich told Siesta Sand. Dietrich enjoys watching the sailboats navigate the waterway. In addition, from the back balcony, the Dietrichs also have a view of the Gulf.

Dietrich and her husband, who live in upstate New York, purchased their three bedroom, three-and-a-half bathroom unit in 2012.

The couple’s two sons often visit with them during holidays. “My husband retires at the end of this year, and we plan to start spending more time [on Siesta],” Dietrich said.

For Dietrich, Summer Cove is an extension of Siesta’s laid-back beach atmosphere. She notes that residents will often gather for an afternoon BBQ by the pool, and she knows many of her neighbors’ dogs in the pet-friendly community. 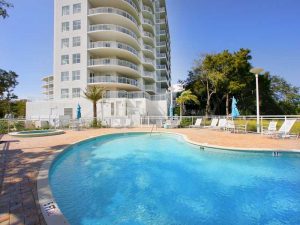 “The units are quite spacious,” said Realtor Bob Ruiz, of Key Solutions Real Estate. Ruiz, who has recently listed and sold several units in the complex, said Summer Cove is a “choice community” with one of the nicest pools on Siesta Key, along with a beautiful clubhouse and the first-class fitness center.

“Each unit has a minimum of two balconies with one in the front and in the rear of the unit,” Ruiz said. Summer Cove also has several boat docks and an excellent kayak launch, Ruiz noted.

The unit that sold for $785,000 sold in December, 2015. The three bedroom, two-and-a-half bath luxury unit features open living spaces and a cook’s kitchen, according to MLS listing information. The sale came out to $378 a square foot.

In January, 2016, a three-bedroom and two-and-a-half bath unit sold for $850,000, or $392 a square foot. The unit’s gourmet kitchen includes solid wood cabinetry and granite surfaces, according to MLS information. The stainless steel kitchen features an upgraded Kitchen Aid induction cooktop. The large master suite features separate his and hers walk-in closets and an elegant bath with oversized soaking tub.