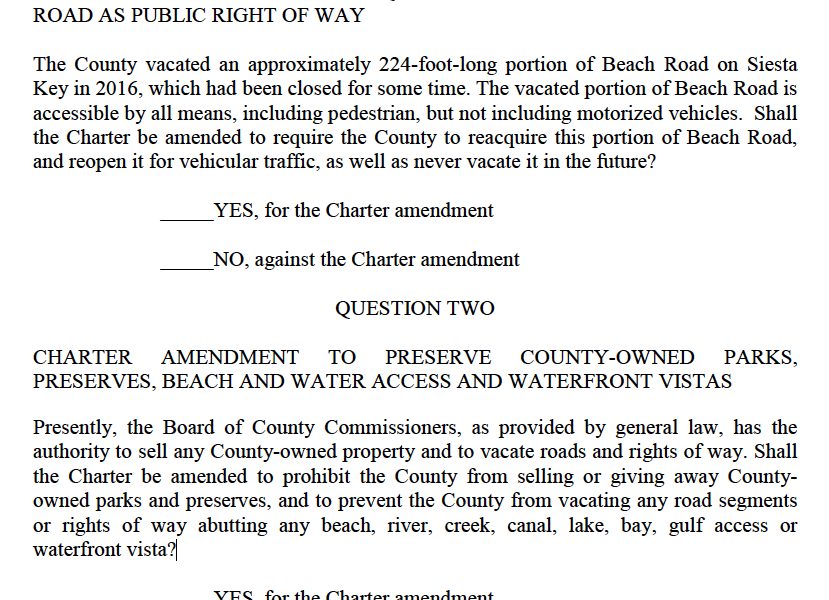 Thanks to a unanimous vote, on Aug. 29, the Sarasota County Commission will hold a public hearing on a draft ordinance that could put two proposed Sarasota County Charter amendments on the ballot that relate to the commission’s May 2016 vacation of a 357-foot-long segment of North Beach Road.

However, County Attorney Stephen DeMarsh said on July 10 that he would be prepared to talk at length, during the public hearing, about the potential ramifications of the measures, if they are approved by the voters during the Nov. 6 General Election.

After Siesta Key resident Michael Cosentino filed a complaint against the county in June 2016, alleging that the board violated its Comprehensive Plan in approving the road vacation on a 4-1 vote, he also began a petition drive on the two Charter amendments. His goal not only was to reverse the road vacation approved on May 11, 2016, but also to ensure that no County Commission ever again would be able to vacate or sell road segments on rights of way along waterways.

He submitted his first batch of signed petitions to the Sarasota County Supervisor of Elections Office on July 20, 2016.

On June 25, Supervisor of Elections Ron Turner wrote formal letters to Commission Chair Nancy Detert, informing her that Cosentino had obtained the necessary number of valid signatures, under the aegis of the County Charter, to have the amendments put on the ballot.

As Cosentino wrote them, the amendments are as follows:

Cosentino needed 13,866 valid voter signatures to get the proposed amendments on the ballot. That number reflected 5% of the voters registered for the last general election prior to the start of his initiative, a Supervisor of Elections Office spokeswoman explained.

In one letter to the commission, Turner wrote that Cosentino had gathered a total of 14,727 valid signatures on the proposed amendment that calls for the county to retain or reacquire the vacated segment of Beach Road.

In a separate June 25 letter, Turner notified Chair Nancy Detert that Cosentino had secured a total of 14,862 valid signatures on petitions for the other proposed Charter amendment.

Before the board vote to authorize advertisement of the public hearing, Chair Nancy Detert pointed out that one of Cosentino’s proposed amendments could have an impact on county ownership of parks and preserves, while the other deals with the reacquisition of the vacated part of North Beach Road. “So I would caution voters to make sure you read [those].”

“The [Nov. 6] ballot is going to be so long,” she continued, “[voters] might want to ask for an absentee ballot, so that [they] can have time to read each and every important item that’s going to be on [the] ballot.”

Referring to the Sarasota County Charter, Commissioner Charles Hines said, “This is our constitution … how we conduct business.”

“Do you see any landmines in either of these two items?” Detert asked County Attorney Stephen DeMarsh. She pointed out that it would be the responsibility of the board members to “write rules” to implement the changes in the Charter, if the ballot measures are approved in November.

DeMarsh responded that one of Cosentino’s proposed amendments would place “limitations on the board’s authority to vacate rights of way. There may be some problems in implementing those if they were adopted by the voters.”

However, he continued, “The appropriate time to deal with those issues would be after the election,” instead of prior to the election, “in my opinion.”

For a number of months, Cosentino appeared routinely before the County Commission during the Open to the Public portion of meetings, and he often told the board that he would overturn the May 11, 2016 vote on North Beach Road.

On one of those occasions, following his remarks, DeMarsh responded to a commissioner’s question about whether the road vacation could be reversed. DeMarsh advised the board members that that was not possible, given the guidelines that govern such commission actions.

DeMarsh indicated on July 10 that it would be advisable for him to discuss the applicable issues during the Aug. 29 public hearing on the ordinance related to putting the Cosentino amendments on the ballot.