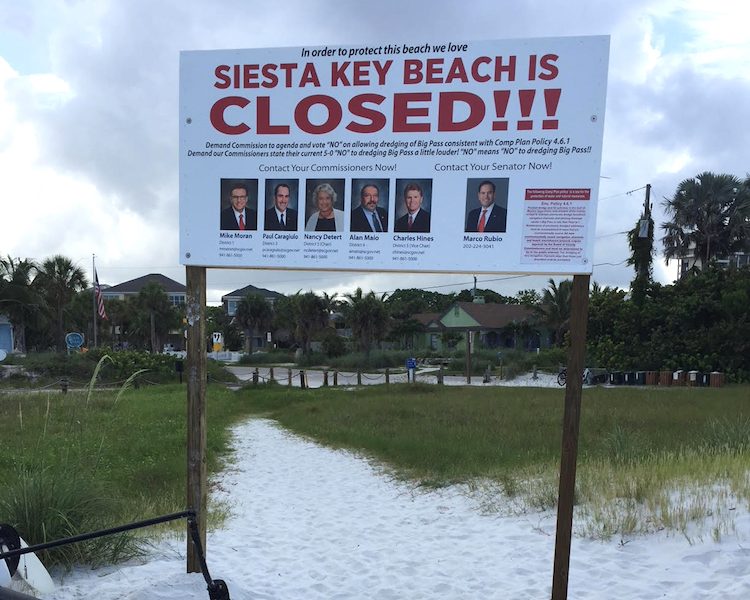 A Siesta property owner has been imploring the Sarasota County Commission to take a definitive stand against the plans of the City of Sarasota and the U.S. Army Corps of Engineers (USACE) to dredge Big Sarasota Pass to renourish about 1.6 miles of South Lido Key Beach.

Michael Holderness, who owns property on both the landward and seaward sides of North Beach Road, has erected a sign in the latter area that has drawn attention to his request.

The sign says, “Siesta Key Beach is CLOSED!!!” It urges the public to demand that the County Commission schedule an agenda item on the Lido Beach Renourishment Project and vote “NO” on it.

Formal county photos of the five commissioners are on the sign, along with a photo of U.S. Sen. Marco Rubio of Florida. Rubio toured South Lido Key with City Manager Tom Barwin and members of the City Commission on June 16, five days after the USACE announced that it would allocate about $13.5 million to the Lido project as part of its 2018 Work Plan. Rubio talked on that tour of his expectation that the severely eroded beach on Lido would look like a beach again by the summer of 2019.

The County Commission voted unanimously to hire the Atkins consulting firm to undertake a peer review of the USACE project plans for Lido. After the Atkins report asserted that it was not possible to confirm that the county’s Ted Sperling Park — at the southernmost part of Lido Key — would be spared damage as a result of the city/USACE initiative, the commissioners then asked the USACE to conduct an Environmental Impact Statement on its project. The USACE declined to undertake such an in-depth analysis. The county spent $50,000 on the Atkins Report.