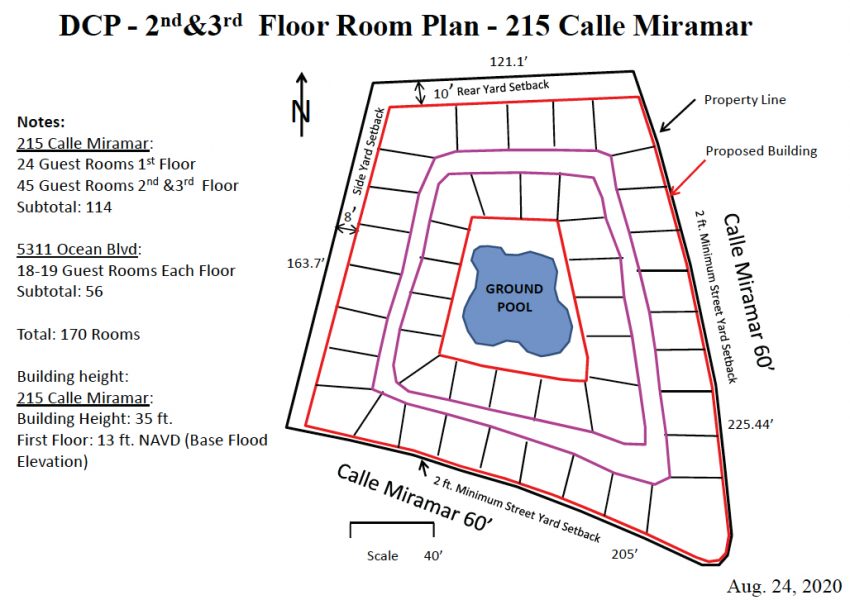 The owners of the Siesta Key Beach Resort and Suites, located at 5311 Ocean Blvd. in Siesta Village, want to demolish the existing 55-room facility and redevelop it into a 170-room complex, as explained in a preliminary application to Sarasota County staff.

No part of the new hotel would exceed the allowable 35 feet in height, the documents say. However, the application indicates that two levels of parking would be constructed below the habitable spaces, which would result in the buildings standing taller than 35 feet. That is allowed under county regulations, as the Federal Emergency Management Agency (FEMA) requires new habitable areas in flood zones — such as those on Siesta Key — to be elevated. Recent projects have put the ground floor elevation at approximately 18 feet.

None of the hotel rooms would have kitchens, the documents note.

Filed on Aug. 24 with the county’s Planning and Development Services Department, the preliminary application says the proposal encompasses not only the Ocean Boulevard property but also a parcel located at 215 Calle Miramar. The materials were submitted by Weiqi Lin, a former member of the county’s Environmental Permitting Division, on behalf of SKRS LLC, which formally owns the parcels.

According to the Florida Division of Corporations, Siesta resident Michael Holderness is the manager of SKRS LLC.

This is the third hotel project which has had its preliminary application provided to county staff since spring. One of those, also a 170-room complex but standing more than 80 feet tall, would be right down the street from the SKRS redevelopment. The other, planned for several years by Gary Kompothecras — a Siesta resident known widely for his 1-800-ASK-GARY medical and legal referral service — would include 120 rooms in a complex about 83 feet tall on Old Stickney Point Road.

The redeveloped resort would have a total of 189 parking spaces, the documents add. Five meeting rooms would be included in the new section of the hotel on Ocean Boulevard, according to the proposed Development Concept Plan.

In the preliminary application, Lin explained that both the Calle Miramar and Ocean Boulevard parcels are zoned Commercial General (CG) within the Siesta Key Overlay Zoning District (SKOD). They are listed as one commercial property at 5311 Ocean Blvd., he pointed out.

The existing hotel was constructed in 1955 and then remodeled in 1995, Lin continued. “It is a non-conforming use of the property,” he added, referring to the zoning restrictions in CG/SKOD. Thus, a voluntary teardown of the complex, he explained, would lead to loss of the 55-unit density.

Yet, he pointed out, the owners should be able to redevelop the property without density limits because of their investment in the land.

Lin also pointed out in the preliminary application that the proposed redevelopment would be limited by Future Land Use Policy 2.9.1 in the county’s Comprehensive Plan, which restricts increase in residential density on the unincorporated barrier islands. Therefore, he added, the owners want to amend that policy to allow lands zoned CG/SKOD “with an existing Transient Accommodation use (resort/hotel/motel) and with 40+ units before March 13, 1989, and still in operation … as of the date … this amendment takes effect,” to be redeveloped into a new resort/hotel/motel that exceeds “the density and intensity restrictions of zoning regulations existing as of that date …”

Lin has proposed a companion amendment to the county’s Unified Development Code (UDC), which combines all the county’s land-development and zoning regulations. That calls for language similar to the proposed change to the Future Land Use policy, and it would apply countywide, he wrote.

The two other Siesta Key hotel project applications also seek modifications to the UDC and Future Land Use Policy 2.9.1. The application for the 170-room hotel near Siesta Key Beach Resort calls for eliminating the density requirement for transient accommodations in the future land use policy. Every hotel room without a kitchen is counted as half a dwelling unit, to determine the number of units that can be built on the acreage available.

Kompothecras’ proposal seeks to amend the policy to allow each hotel room without a kitchen to count as one-quarter of a dwelling unit. However, it would apply only to what Kompothecras refers to as the “South Bridge Area,” encompassing the commercial district south of the Stickney Point Road drawbridge.

Among other facets of the redevelopment of the SKRS property, Lin noted, “The owners are community activists, who own homes on Siesta Key and natives who have loved and protected our waters since a child. This proposal is … a community and environmentally friendly proposal that will help preserve the community and neighborhood values by not seeking a height increase above 35 feet allowed through a Special Exception; and by preserving the land use patterns on Siesta Key …”

“Today, the existing hotel is near the end of its economic life and has functional obsolescence,” Lin added. Members of the community would prefer it be redeveloped into “a modern new resort hotel,” he continued.

On Sept. 3, the members of the county’s Development Review Committee, who represent the departments and divisions involved in land development, reviewed the SKRS preliminary application.

A Historical Resources staff member pointed out that the parcel at 215 Calle Miramar “has four historic structures dating to 1948 [and possibly earlier], 1954, 1961, and 1972. The earliest appears potentially significant under [county regulations].” Therefore, a Historic Cultural Resource Assessment Survey will be required, the staff member added.