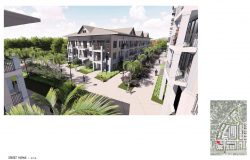 Benderson Development has revised its plans for the proposed Siesta Promenade project to encompass 415 residential dwelling units, a hotel with 130 rooms and 140,000 square feet of retail and office space, as outlined in materials submitted to Sarasota County’s Planning and Development Department on June 28.

The application Benderson filed with the county in August 2016 called for 506 dwelling units and a 150-room hotel, with 140,000 square feet of retail/office space.

A recent Siesta Key Association survey that included a question about the 2016 Siesta Promenade plans found that, by a ratio of 23-1, members agreed with the nonprofit’s “push for no increase in density or intensity” and its opposition to “any plan that will exacerbate traffic congestion.” More than half the members responded to the survey.

In January, the County Commission voted 4-1 to allow Benderson to proceed with specific studies in accord with the company’s petition for a Critical Area Plan (CAP) designation for the approximately 24 acre-site at the northwest intersection of U.S. 41 and Stickney Point Road. If ultimately approved, the CAP designation would allow Benderson a density up to 25 units per acre, instead of the 13 permitted for the county’s Commercial General zoning districts. That also would enable the company to construct buildings as tall as 85 feet, which it is continuing to plan on, as evidenced by documentation in the materials it filed on June 28.

County staff estimated it would take up to 45 days to complete the review of the material. After the application has been determined complete, a county Planning and Development Services Department notice said, it probably will be another 60 days before the Planning Commission will hold the first public hearing on the Siesta Promenade proposal, with the County Commission hearing 45 days later, at the earliest. By our calculations, the County Commission hearing probably would not be scheduled before some time in November.

Benderson is seeking county approval to rezone the property, too. As Todd Mathes, director of development for Benderson, explains in the newly submitted material, the firm “purchased the Pine Shores mobile home park and adjacent parcels that are components of the Stickney Point Road project in 2005. The property was used as a mobile home park starting in the mid-1950s.”

However, Mathes continues, the county’s Future Land Use designation of the site recently was changed to Commercial Center and Commercial Corridor. “Accordingly,” Mathes points out, “our company has studied a number of different potential commercial uses for the project, ranging from a mix of residential, hospitality and commercial uses that were dense and intense in form, to lifestyle and town center projects that evoke new urbanism concepts.” Therefore, he adds, “What we are presenting to the County for consideration is a mixed use, open air retail/small lifestyle center … The proposed layout will significantly enhance the streetscape of the Stickney Point Road and U.S. 41 intersection [by constructing a series of buildings] along the perimeter of the property.”

In the original site plan Benderson developed for the property — in 2014 — the project “would have transitioned quickly from commercial to single family residential,” Mathes continues. “The mixed use project provides a residential buffer, stepping down to a three story, multi-family [building] before transitioning to the single family neighborhood [of Pine Shores Estates].”

Facets of the traffic studies

The documentation included an updated traffic analysis, as required by the County Commission. The Kimley-Horn and Associates report is dated April 2017.

While noting that the “final access configuration of project driveways must be approved by the Florida Department of Transportation (FDOT),” Kimley-Horn says its analysis included these considerations:

• That the project driveway along U.S. 41 allow only right turns in and out of the site. “In addition,” the analysis notes, “this intersection location was located as far north as possible to provide as much distance between this driveway and the U.S. 41 & SR 72/Stickney Point Road intersection, as requested by FDOT.”

• That the westernmost driveway along Stickney Point Road would be aligned with Avenue B and C as a full-access, signalized driveway. Because of that, the document says, the analysis included the assumption that the existing median opening at Stickney Point Road and Glencoe Avenue would be closed.

• That the central driveway for Siesta Promenade along Stickney Point Road would allow only right turns into and out of the development.

• That the easternmost driveway along Stickney Point Road would allow only right turns into the property.

Kimley-Horn also points out that FDOT’s Five-Year Work Program for Sarasota County does not include any funding for roadway capacity projects within the vicinity of the site within the next five years. However, the report adds, FDOT has planned a “safety improvement project” at the intersection of U.S. 41 and Stickney Point Road that is scheduled to go out for bids in July 2019. “The right-turn lanes are proposed to be modified to operate under signalized control as opposed to the existing channelized right-turn lanes which will provide a safety enhancement to both pedestrians and bicyclists,” the report says.

Because the County Commission called for the Siesta Promenade traffic studies to be undertaken during high tourist season, Kimley-Horn conducted motor vehicle counts at the specified intersections on Feb. 15 and Feb. 25, the report points out. The periods it analyzed were 4 to 6 p.m. on a weekday and 12:30 to 2:30 p.m. on a Saturday, the report notes.

Residents of those immediate areas have said, however, that those are not peak beach-going times. Yet, the residents maintain that the high number of motor vehicles headed to and from the beach at the height of tourist season needs to be incorporated into traffic analyses for Siesta Promenade.