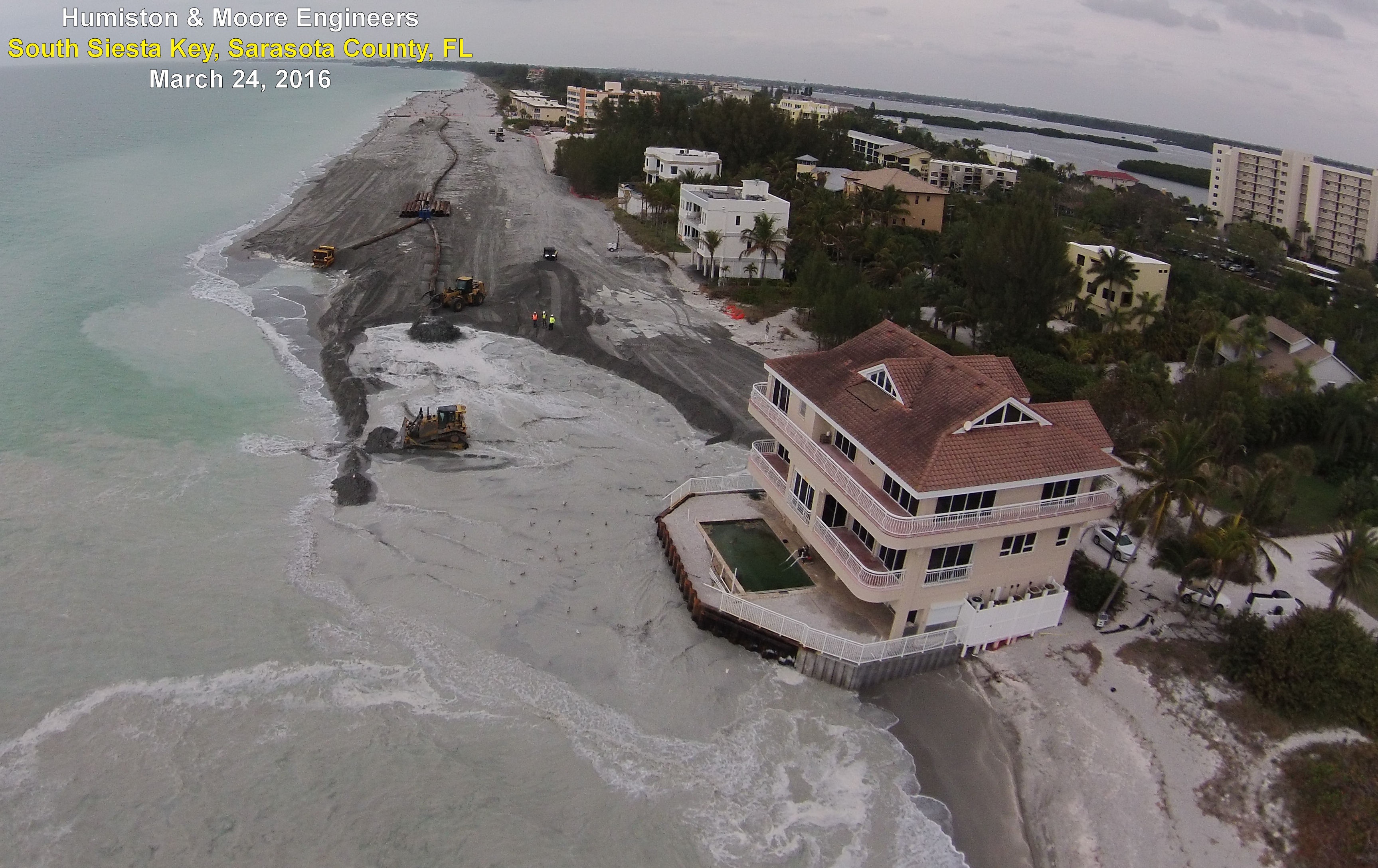 A buffered shore and new sidewalks among county improvements

The improvements come in the form of two major county projects: a just wrapped-up beach renourishment; and a Turtle Beach Park capital project set to begin early this summer.

By next tourist season, an eroded shore and sharp escapements will be replaced with a sandy beach, and Turtle Beach Park will have expanded parking, new sidewalks, and a rain garden, among other park improvements.

• The South Siesta Renourishment, as of press time, was expected to be completed by April 30. The $21.5 million renourishment project added nearly 750,000 cubic yards of sand along 2.1 miles of shore and 1.1 acres of dune vegetation. The project was designed to buffer stretches of beach that had been severely eroded since an initial renourishment in 2007. The timeline for construction was planned so the project could be completed outside of sea turtle nesting season.

• Meanwhile construction of the Capital Improvement Project at Turtle Beach Park could start by early summer. The project is slated to cost $601,000. The improvement project includes expanded parking, new sidewalks and crosswalks, a relocated and improved children’s playground, fresh landscaping, a kayak launch, and an expansive rain garden with native plants.

Siesta Sand takes a look at both projects:

The dredged sand was loaded into hopper dredges that then navigated to an offloading point about a quarter-mile from the beach. For about two months, the contractor used two dredges — instead of one as initially planned — during the first phase of constructing the beach.

“The contractor got a bit of a later start, so they brought two dredges,” Laird Wreford, Coastal Resources Manager for Sarasota County, told Siesta Sand. Using the pair of dredges, “they were able to make tremendous progress in a short period of time.”

The dredged sand was then pumped onto the beach, where bulldozers shaped the sand on the beach. The sand buffered the eroded shoreline that was initially nourished with a million cubic yards of sand in 2007. Crews completed the southern terminus of the project first, and then worked northward. They were continuing to make good progress, Wreford said in an April 7 interview.

Wreford said that’s important because all equipment has to be off the beach before the start of the nesting season. “The big push was to get all work completed and everything off the beach and back to normal by April 30,” Wreford said. “And we are on track [to do so].”

Some good news, said Wreford, is that the county’s consultant found that the three sand-source sites used during this renourishment have enough sand for the next renourishment as well.

“Our consultants are telling us there should be enough sand when we do our next renourishment in about eight years [barring a major storm event],” Wreford said.

The 2.1-mile renourishment stretched from south of Turtle Beach to a point about halfway up The Sanderling Club property. The sand will fill in a beach where wave action dug escarpments into the shore, as deep as 10 feet in some places. Storms that spared the area but traversed through the Gulf of Mexico likely played a role in the erosion, Wreford said.

“There was a lot of interest among residents [who live] along the project area about getting it started,” Wreford said. “Folks were glad the project started.”

“What beach renourishment does is buys you time, it moves the erosion point much further out seaward,” Wreford said.

After the equipment is off the beach and work completed, as part of the county’s permit, it is required to take shoreline measurements and monitor ecologically-sensitive, hard-bottom reefs to ensure they are not getting covered in sand.

“We will also be able to find out how well the project has performed and how slowly or quickly sand is washing out,” Wreford said.

The park will be getting upgrades soon as part of a $601,000 Sarasota County improvement project.

The County Commission is scheduled to vote on the contract May 24. “That’s the next step,” Ondercin said. “Then the county will issue the notice to proceed, and the contractor can begin shortly after that.”

The park will remain open during construction, which is slated to last four to six months. However, a small portion of parking might be closed off to be used as a staging area.

Sidewalks will be installed throughout Turtle Beach Park. Currently “there is not a single sidewalk,” Ondercin told Siesta Sand in a February interview. New pedestrian crossings within the park will also enable beachgoers to safely cross both Turtle Beach Road and Blind Pass Road as they try to get to and from the beach. The new sidewalks will be installed throughout the park and lead all the way to the boat launch.

“The primary goal [of the improvement project] is to provide more parking for visitors and also to make it a safer, more walkable park so people can get from one side of the park to the other without having to walk along the road shoulder,” Ondercin said.

In place of the old playground, the contractor will build a parking lot that will add 26 spaces to the park and three additional handicap parking spaces. Adjacent and to the south of the new parking, crews will construct a rain garden. About 100 feet long, this shallow retention pond will be planted with native vegetation.

The Turtle Beach park concept plan has been in the works since 2007, but plans were put on hold when the recession hit due to a decrease in surtax funding. “It was put on hold until additional funding could be identified,” Ondercin said.

Ondercin believes a new kayak launch, to be constructed on the north end of the lagoon, will be popular among kayakers and kayak rental vendors.

The new launch will be located on the northern edge of the lagoon, and will allow kayakers to launch their vessels separately from the park’s motorized boat launch. “Kayakers and canoe-ers can launch from a separate launch so they don’t have to worry about trailers backing up,” Ondercin said.