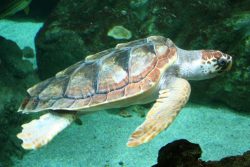 Siesta was among three keys that broke their individual numbers this year for nesting sea turtles, Mote Marine has reported.

The other barrier islands that broke individual records were Longboat and Lido, Mote noted in a news release.

Mote staff and volunteers documented 4,503 nests for all turtle species over the 35-mile length of Sarasota County’s shoreline, Mote reported; it released the final numbers on Oct. 31.

Out of all those nests, the news release said, 4,424 were laid by threatened loggerheads; 79, by seven threatened green sea turtles.

“Two nests in the loggerhead group were sampled for genetic testing to determine if they are hybrids from a loggerhead and green mating,” the release pointed out.

Although the total this year did not surpass the 2016 record of 4,588, the release said, the season did see the highest number ever of green sea turtle nests “in Mote’s 36-year history of local sea turtle conservation.”

The release also noted, “During this year’s night-time tagging effort on Casey Key, Mote scientists encountered sea turtles 591 times — identifying 380 distinct individuals. Of those individuals, 293 were ‘neophytes’ documented and tagged for the first time. It’s not clear whether these turtles are young females that recently matured or whether they’ve previously gone ‘under the radar,’ nesting on nearby beaches without tagging programs,” the release added.

“In any case,” the release said, “this year’s results continue an encouraging trend.”