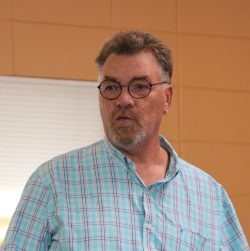 When the Siesta Key Chamber of Commerce conducted its quarterly meeting for members in May, Bill Kinney of Paragon Fine Art Festivals had a spot on the agenda to talk about his second Siesta Beach Seafood & Music Festival, set for Dec. 2-3 on Siesta Public Beach.

The inaugural event in 2016 “was an enormous success,” he told the approximately 18 people present. His goal, he said, is to be more inclusive of island businesses with the next one. Sarasota County Parks, Recreation and Natural Resources Department (PRNR) staff, he indicated, also was hoping to see more involvement of island restaurants in the upcoming event. Therefore, he continued, he was seeking the Chamber’s support for the 2017 festival.

(County spokesman Drew Winchester told SNL in early June that PRNR staff members “have been working collaboratively with Mr. Kinney on [the 2017] event and staff suggested that he communicate the event plans [to] the Siesta Key Chamber … This was not a requirement of [Kinney’s] getting the permit to do the event.”)

Based on revenue generated by the first festival — which does not charge admission — Kinney told the Chamber members in May that he would expect to be able to donate $4,000 to $6,000 to the Chamber from the 2017 proceeds, if it partnered with Paragon. “You don’t have to do a thing,” he added, in terms of actual activities during the festival.

Kinney stressed that he did not want to hurt island businesses “by sucking all the energy out of the local area.” No Siesta-based restaurants participated in the first festival, he acknowledged. However, a number of dining establishments with locations in downtown Sarasota offered food to the event-goers, he noted.

When asked how he reached out to island restaurant owners to seek their participation, Kinney explained that he had one of Paragon’s representatives “go to each restaurant personally. … Every restaurant, with the exception of one, was invited [to be part of the festival],” he added without elaborating on that exception.

On the Saturday night following the first day of the festival in December 2016, he continued, he visited several Village restaurants — Blasé Café, the Daiquiri Deck, the Siesta Key Oyster Bar and Flavio’s Brick Oven and Bar — “and all of them had an increase in business.”

He spoke to 10 people at Blasé, he added, and all of them had gone to that restaurant after attending the festival. “So we had a huge financial impact on the businesses,” Kinney said.

Additionally, worries voiced before the 2016 event about the potential that the music “would disrupt the tranquility of the residents and condos” proved to be unfounded, he pointed out. “We took decibel readings during the event, and we had absolutely no issues at all.”

Chamber Chair Mark Smith told Kinney that he heard complaints that the December 2016 event “hindered folks getting to the beach.”

Kinney replied that county staff decided to have the restaurant vendors set up on areas where pavers are located in the beach park. However, Kinney added, he and his staff ensured that the pavers were cleaned thoroughly after the event ended.

“[The festival] didn’t affect me one way or the other,” Kay Kouvatsos, co-owner of Village Café, told Kinney. However, she continued, she heard complaints about county staff allowing a private enterprise to use a public park to make money. “It raised a lot of tail feathers,” she added.

“I’m not making any money” from the Siesta event for probably three years, Kinney replied, given the start-up nature of the festival on the island. He said he saw the event as an investment in the community, and all of his vendors were based in Sarasota County.

“The event was sponsored by a not-for-profit [organization],” Kinney responded. In May 2015, Kinney said, he asked the leaders of the Siesta Key Village Association to be a partner with him in the first festival on Siesta Beach, but they declined. Then he sought another not-for-profit organization to become involved with the event.

Her biggest concern was the potential for damage to the pavers, Kouvatsos said, given the $21.5 million the county paid for improvements at the beach park.

“We covered the pavers,” Kinney responded, reiterating his view that staff should have put the vendors in a different area.

The parking lot would have been better, Kouvatsos said.

“Let’s get everybody else involved,” Kinney told the Chamber members. “Let’s make this a community event.”

Thirty percent of the attendees were from outside the county, he added. “This has been a solid event for us across the board,” he added of similar festivals he has planned in other parts of the county. “We haven’t had a failure yet … I just hope that we can all … get along. If there are issues, I am open to addressing issues.”

Kouvatsos told him she attended the inaugural Downtown Sarasota Seafood & Music Festival in 2015 and thought it was “a great event.”

“You gave us some food for thought here,” Smith told Kinney at the conclusion of Kinney’s remarks. “Hopefully, we’ll digest it.”

Subsequent to Kinney’s presentation, Smith sent a survey to Chamber members, asking them their views about the potential for the organization’s partnering with Paragon.

During a July 3 telephone interview with Smith, he stated he had received some responses, and then the Chamber board had discussed the matter. Ultimately, he said, the decision was made “not to get involved with Bill Kinney.”

Smith added, “The Chamber doesn’t want to get in the practice of partnering with third parties.” Even if the Chamber were just a partner in the Seafood & Music Festival, he pointed out, the public would perceive the event as a Chamber function. That also would mean the Chamber “would take the heat” if the public was upset about any facets of the festival, Smith noted. “To take the heat for somebody else’s party” is not something the Chamber board wants to do, he said.

When the Chamber handled its first Siesta Fiesta in April, Smith continued, one member was “extremely upset” about how that event transpired. (In the past, the Siesta Key Village Association worked with Howard Alan Events to host Siesta Fiesta; the Chamber absorbed the Village Association at the end of 2016.) “We’re not going to stop our relationship with Siesta Fiesta,” Smith stressed, “but do we really want to make a habit of [working with other entities on events]?”

He had sent Kinney a letter explaining the Chamber’s position and wishing Kinney well, Smith added.

During a July 5 telephone interview, Kinney told SNL he had no comment about the Chamber’s decision other than to say, “It’s a shame.”

Asked how the planning is going for the second Siesta festival, he replied, “Phenomenal. … It’s only going to be better this year.” Additionally, Kinney said, county staff has decided to allow the vendors to set up on the sand instead of on the pavers.