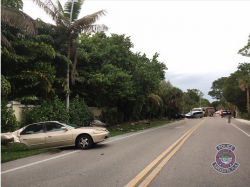 On Wednesday, June 14, around 6:15 p.m. there was a major accident involving 3 vehicles at Higel Avenue and Faubel Street, which closed the Siesta Drive Bridge for a period of time. The accident happened at the infamous curve on Higel Avenue. There were 4 serious injuries, all taken to Sarasota Memorial Hospital. Of the 4 injured, one was fatal.

There have been 21 crashes in the Siesta Drive-Higel Avenue curve since 2012, according to the Sarasota Police. The curve has been called “Dead Man’s Curve” by residents that live in the area. Siesta Drive and Higel Avenue are marked with flashing yellow lights, signs, digital speed alerts, and sharp turn arrows.

Just 8 plus hours later, less than a mile down the road, a single motor vehicle did not negotiate the curve traveling north on Ocean Blvd crossing into the southbound lane hitting a retaining wall at a private home. This is the same area a motorcyclist hit and died last year. The Ocean Blvd curve has had four major accidents in less than two years.

A male was driving a 2016 Volkswagen Passat northbound on Ocean Boulevard around 2:53 a.m. when he missed the curve approaching Ocean Place. The car swerved to the right striking a tree, a landscaping wall and a second tree, according to the Florida Highway Patrol.

The driver was transported to Sarasota Memorial Hospital with serious injuries. While the crash was not alcohol-related, the driver was cited for not wearing his seat belt, as well as careless driving, according to FHP.