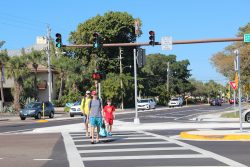 Parking at Siesta Public Beach, traffic congestion and concerns about crime were the focus of questions directed at Deputy Chris McGregor of the Sheriff’s Office during the November Siesta Key Association (SKA) meeting.

SKA Director Gene Kusekoski kicked off the comments, noting that drivers often are reluctant to stop for pedestrians and bicyclists trying to cross the intersection of Stickney Point Road and Midnight Pass Road.

He recently tried to use the intersection himself, Kusekoski said, and three cars flew past him. He made eye contact with one driver, he added, and even that did not make any difference.

McGregor responded that he would put in a request for more Sheriff’s Office focus on that situation. Even though the road is managed by the Florida Department of Transportation (FDOT), McGregor pointed out, the Sheriff’s Office is responsible for enforcement of safety issues there.

Then a question arose about the right turn on red sign at the same intersection, for traffic headed onto the Key from Stickney Point Road. McGregor explained that if a driver stops where the Florida Department of Transportation (FDOT) signage indicates the driver should stop, the driver “can’t see oncoming traffic on Midnight Pass Road. It’s a state [problem],” he added, “and we’re trying to address it. It’s a tough intersection.”

McGregor also clarified that if the “No Turn on Red” sign is not lit up, drivers may turn on red.

Then a woman who lives near St. Boniface Episcopal Church on Midnight Pass Road reprised complaints that an SKA member living in Siesta Estates raised about Memorial Day. “July Fourth was a horrible time for us,” the woman said on Nov. 2.

“Me, too,” McGregor responded, eliciting a round of laughter from the approximately 60 audience members.

The woman proceeded to explain that about 70 cars were left parked on the county’s right of way along Midnight Pass Road, adjacent to her condo complex. “We hired a security guard for those holiday weekends,” she added. What could the Sheriff’s Office do to help, she asked.

“I bet you we wrote 80 or 90 tickets” on Labor Day, McGregor replied, because people were parked illegally on rights of way. “I don’t know what your answer is” to prevent people from doing that, he continued. “I’ve been out here for many years,” he told her, and he had not seen people leaving vehicles on that part of Midnight Pass Road right of way until recent months.

McGregor then told the audience, “We started writing more expensive tickets,” as allowed by a state statute. In the past, he said, the Sheriff’s Office citations for illegal parking were $25. Drivers would laugh at him when he told them that was how much it would cost them, he said, and then they would proceed to park where he had told them they could not.

The audience applauded him loudly.

In answer to a question about towing illegally parked cars, he continued, “It’s not that we don’t have the manpower [to deal with those situations].” However, the Sheriff’s Office has to weigh the demands on its personnel’s time, he explained. If a deputy calls for a tow truck, he pointed out, the deputy has to stay on the scene until the tow truck driver has removed a vehicle. Furthermore, McGregor said, if a tow truck is called on a holiday weekend, most likely the driver will take a long time to arrive, as the driver will have to contend with the extra traffic congestion on the island. “We try to avoid towing unless it’s an egregious situation.”

When SKA member Katherine Zimmerman asked about whether the Sheriff’s Office ever uses tire locks on vehicles parked illegally, McGregor replied, “I don’t think we can take your car away from you” for that type of offense.

Then the woman who kicked off the discussion suggested that someone use electronic signboards on U.S. 41 when no spaces are available at Siesta Key Public Beach: “Parking lot full. Turn around,” she said, leading to another round of laughter.

“Something has to be done before they even approach the bridges,” she added.

“I go out to the public beach and I put four signs out that say the lot is full,” McGregor responded. “People still pull in and [try to] park.” Many people do not believe the signs apply to them, he added.

He has noticed that some island residents put large rocks on their rights of way, he continued, to prevent people from parking in those places. Even if more residents tried that tactic, he said, “I guarantee you, [people will] move ’em or drive around them.”

One audience member — a retired Auburn University faculty member — cautioned audience members that, in Alabama, if a drunk driver were injured by driving into rocks on rights of ways, the driver could hire an attorney and bring suit against the adjacent property owner, seeking damages for contributory negligence. Lawyers suing on behalf of clients, he said, “will go after the deepest pockets, and it can be very hurtful.”

The man added that he was not certain whether Florida law would allow for such lawsuits.

McGregor explained that he had not intended to imply that the use of such rocks is sanctioned by the Sheriff’s Office. That is action on which the department cannot take a stance, he said.

The woman next asked McGregor what the policy is for the Sheriff’s Office if people trespass on the grounds of a condominium complex. For example, she said, if someone who does not own property in the complex is “having sex by the pool or drunken parties. … It is private property.”

By all means, McGregor told her, residents should call the Sheriff’s Office. If they feel threatened enough, they can call 911, he added. “We can have [such people] trespassed as long as somebody from the condo [complex] is there to sign [a citation],” he pointed out. Then, if the person returns after receiving that warning, he added, a deputy can arrest the person.

If the trespassed person leaves the property before a deputy arrives, McGregor continued, the deputy still can arrest the offender as long as someone is willing to sign an affidavit, attesting to the fact that the offender had returned to the complex.

“Please, please, please do call, because we don’t have eyes everywhere,” he urged the audience.

“And don’t approach them yourself,” Zimmerman added. Once at 3 a.m., she said, she asked loud revelers across the canal from her home to keep down the noise, and they “threatened to come over on paddleboards and beat me up.”

“This is the Key,” McGregor replied laughingly. “There are strange people walking across people’s lawns all the time.”

Ramirez told him she had heard about a home burglary involving the theft of television sets.

That incident occurred at the Tropical Breeze Resort on Columbus Boulevard, he told her, adding that he had handled the report. “That might have been an inside job.”

An Avenida Madera resident in the audience then explained that he was aware of a neighbor’s home having been broken into recently.

McGregor responded that he had not heard about that incident.

Another person asked what to do when he sees drivers running red lights or committing other offenses.

McGregor and SKA Director Joe Volpe responded that anyone may call 365-TAGS and report such an incident. The offender will receive a courtesy letter describing what the witness observed. For most people, McGregor said, knowledge that they had been seen disobeying a traffic law will be enough to make them more likely to abide by the law in the future.

In response to a question about whether the drivers of the free ride services on the Key have chauffeur’s licenses, McGregor said the state does not require that.

Replying to another question, McGregor told the audience that it is illegal in Florida to use any type of frame around a license plate that obscures part of the plate.

Finally, after about 18 minutes, SKA Vice President Catherine Luckner wrapped up the question-and-answer session with McGregor so the board could move on to other agenda topics.