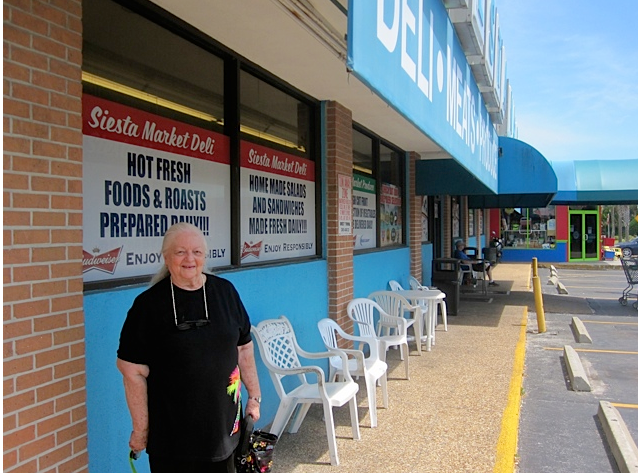 News over the past few weeks that the Siesta Market would soon be closing hit many on the island like the loss of an old family friend.

Known for its well stocked deli (the chicken salad has a well-deserved local following), fresh produce (especially the tomatoes) and its quick in-and-out convenience for traffic weary islanders looking to avoid a trip over the bridge, many found it hard to imagine the Village without the market that in one form or another has been right there at the center of all things Siesta for over forty-four years.

Brothers Vincent and Peter Messina have operated the store for the past 14 years, but have decided the time is now right to retire. They still own a quick stop on North Orange Avenue in Sarasota where any remaining inventory will likely be moved after the closing this month. But they’ve determined it’s time to turn the page on their Siesta location.

Property owner Chris Brown’s phone had been ringing off the hook after word got out, with calls from reporters and concerned island residents wanting to know what would be replacing the popular food market after the Messinas closed up shop.

Rumors flew up and down the Island telegraph.

Brown patiently reassured everyone that no such plans were in the works. From the start he signaled that he and his partner Mike Grathon were looking for another grocer to fill the space.

The two purchased the building and property last fall for a reported $2.8 million.

Brown told the Siesta Sand before the Morton’s news broke, “we’re not going to put anything in that’s not a good fit for the Key. A big box store just wouldn’t work. Another food market would be ideal.”

Local management was also high on Brown’s list from the start, indicating he would clearly prefer a local family operation along the lines of Morton’s or the Crescent Beach Grocery on the southern end of the key, run by the Morton and Connelly families, respectively, both with deep and long established local roots.

Brown even mentioned the possibility of opening a small grocery on the site himself if an interested local lessee with a grocery background wasn’t found. “There are plenty of consultants that could (have helped us) work out that kind of plan,” he said.

Now, with the news that Morton’s will be the new tenant, speculation has shifted to just how the new location will differ from or resemble the store’s existing location in Southside Village on the mainland. The “gourmet” niche the Morton family has cultivated over the years has served the family well and been popular with local grocery shoppers; but that upscale niche (which features an extensive inventory of wines) is somewhat at odds with the funky, throwback feel of the existing Siesta Market that has endeared it to so many residents of the Key.

Beyond the retro-vibe, the fresh tomatoes and the chicken salad, there has always been an easy familiarity about the place. Long time employees like Jeannetta Tolar, 77, treat customers like family, greeting many by name with a cheerful, “How’re you doing today?” (and actually expecting an answer) as they walk through the door.

If the Messinas had held on a bit longer, Tolar would have made it to her 40th anniversary working at the store. “I started in the summer of 1975,” she said while sipping a coke at the Village Cafe recently. “I had been a housewife and mother, but had just gone through a divorce and needed a job. I heard they had an opening from a friend who knew someone working there and decided to give it a shot.”

At that time, Ron and Marsha Lewis owned the store, having purchased it a few months prior. Some recall the original store being a SupeRx, which was a store brand of The Kroger Company, used by the company throughout Florida in the 1960s and 1970s.

When asked if she ever thought she’d be there for 40 years, she laughs, saying, “No way! But I liked it. And I guess they liked me.”

Her favorite part of the job? “Oh that’s easy,” she says. “The people. I’ve seen so many kids grow up out here, have kids of their own and I’ve seen them grow up too. I’ll miss seeing all the people I’ve met here.”

“Geraldo (Rivera) was in last week,” she says. “And I have a picture with Dickie Smothers when he came in…and there’s that lady doctor? What’s her name..? She was on TV…” She pauses in thought, taking another sip of her Coke.

“Dr. Joyce Brothers!” she finally says as the name comes to her.

What about the parts of the job that haven’t been so great?

“Well we were robbed once,” she says. “One of the other cashiers was counting money out in the open and when she finished she reached over to hand it to me and a young guy standing there saw it, pulled a knife and said ‘give it to me.’ ” (She did…saying the perp quickly ran out of the store and was never caught).

Another less than ideal part of the job? The traffic. “I’ve lived in the same house since I was four,” she explains. “The drive to work has always been the same, but every year it takes longer to get here.”

Unlike the Messinas, Tolar has no desire or plans to retire.

“I want to work,” she says, adding that maybe she can find a job at the new Wal-Mart near her home on the mainland…or at the recently opened Detwiler’s Farm Market on University Parkway.

But Tolar’s heart remains on the Key, and in late-breaking news, that’s where it appears she will be staying.

Perhaps wanting to add a bit of that easy familiarity Siesta Key is known for to their upscale image, the Mortons decided last week to offer Tolar a position at their new location.