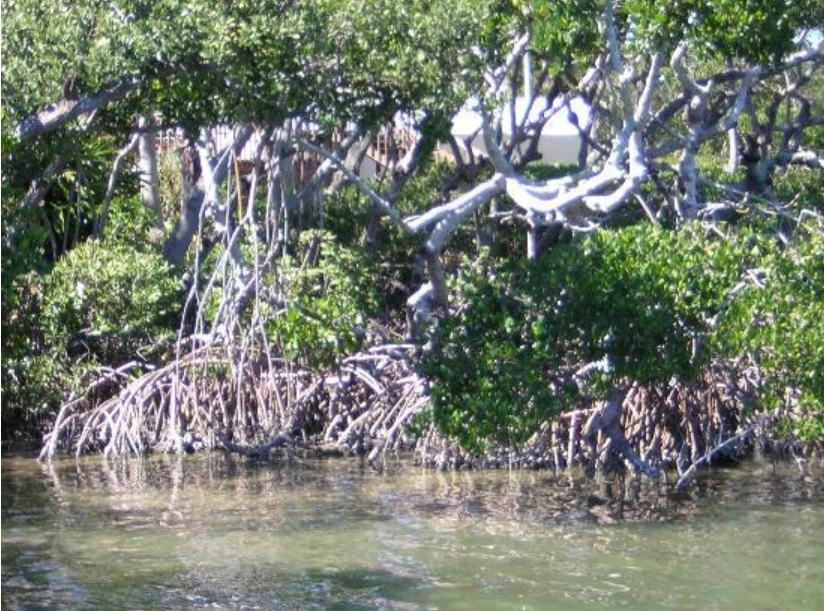 Oh, what a tangled web we weave

Up and down Anna Maria, and Longboat and Lido Keys, residents are concerned about the loss of mangrove forests (mangrove patches is more like it these days) along the bay side of these barrier islands. One would hope that everyone is aware that the tangled web of mangrove roots breaks up the waves that wash away our sandy shores. Of course being aware that mangroves are good and that, therefore, cutting them down is bad, seems to be beyond the capabilities of some of our citizens. Either that or they just don't care.

Then again, it could just be a case of instant gratification being more important than any long-term considerations of their actions. For a homeowner, it means an instantly clearer view of the bay as opposed to their losing 75 sq. ft. of their property along that same body of water every five years. For a developer it is even more clear-cut: with a better view they can sell a property for an extra "X" thousand dollars versus no downside (for them). There is a downside for the new property owner, but that is so not important.

One might ask why there is no downside for the developer when it is actually illegal for anyone to over cut, let alone tear out, mangrove trees. The simple reason is that our legislators in Tallahassee won't let counties prosecute developers (or homeowners) who destroy the mangroves, but neither will they enforce the laws that permit the state to do the prosecution. It is the old story of passing laws but then denying the funds to enforce them. The elected members of the house and senate get to show their constituents that they love the environment but don't alienate their developer campaign-fund-donors by actually doing anything.

Manasota and Sarasota counties periodically make noises indicating they would like to take over enforcement from the state and are doing so again. The latest case was someone caught in the act. The state won’t prosecute even with the county having evidence. And some of the county commissioners even seem to cater to developers. Sarasota Commissioner Charles Hines says, "My concern is … someone cuts one little branch and here comes the county. I don't want to have homeowners who are scared to death if they trim a branch or two and the county's going to come down on them". He says that, yet the law clearly states that one can't cut off more than four feet from the top and one can't cut down to the root. Cutting one little branch, or a branch or two, is "trimming" and nothing more.

Also, how much does it cost to combat erosion? With fines of $250 per day for violators, one would think proper enforcement might not only be the prudent thing to do, but might also pay for itself.

Each year Key folk are concerned about bridge openings and closings. Closing a bridge for repairs could be for an extended period of time, thus inconveniencing lots and lots of people. And, even worse, bothering some of those people multiple times. Opening a bridge, usually for boats to pass through on the way to or from the gulf, is for a quite short duration thus, it would seem, inconveniencing fewer people.

Ah, but some of those bridge openings are for maintenance with no boats passing thru. This means that the driver of a stopped car sees no boat and becomes upset, as if the bridge tender saw him (it is usually a him that gets upset) coming and opened the bridge on purpose, just as an annoyance. Longboat Key mayor Jack Duncan feels that such openings are “incredibly frustrating.” But, apparently, it is not the bridge openings that are frustrating, it is the not knowing why they are open that is so upsetting.

Statistics show the New Pass Bridge only opened 387 times in 2014. This comes to barely more than once per day. Hardly bothersome. But then, a bridge is rarely ever opened at night, and not much at all during the off-season. In season, in January of this year, New Pass Bridge opened 18 times in one week. What are the odds that one particular person was stopped from driving their car over that bridge more than once that week? But they do complain.

Perhaps a sign should be put up at each side of all bridges that states either, “Bridges open randomly just to annoy you (and you know who you are)” or “Bridges, sometimes, are opened for maintenance, just to keep you safe.”

Well, sort of. But only if you live on the south end of Longboat Key and can wait a year.

First of all, Sarasota Memorial Hospital has purchased land on St. Armands Key and plans on opening an urgent care center sometime in 2016. If the Ringling Bridge is totally backed up, and you have urgent need of care, this will be the place to go. And closer to home, there has been a proposal for a new medical facility in the Bay Isles area of Longboat Key – sorely needed since Dr. Pamela Letts retired back in early 2014.

The estimate to lease and build out the new facility and to cover operational expenses for two years is, roughly, $1.6 million. Fortunately an anonymous donor, in conjunction with Ocean Properties, Ltd., has contributed $500 million towards that goal.

The facility will, it is hoped, house not just a family medical practice (the doctor has already been selected and is getting ready to get on board), but a center for wellness and specialized care, a Roskamp program for brain health, imaging services, and an on-site lab. A 2016 opening is forecast. We are used to waiting for doctors in their waiting room. Now we just have to wait for the waiting room to be built.