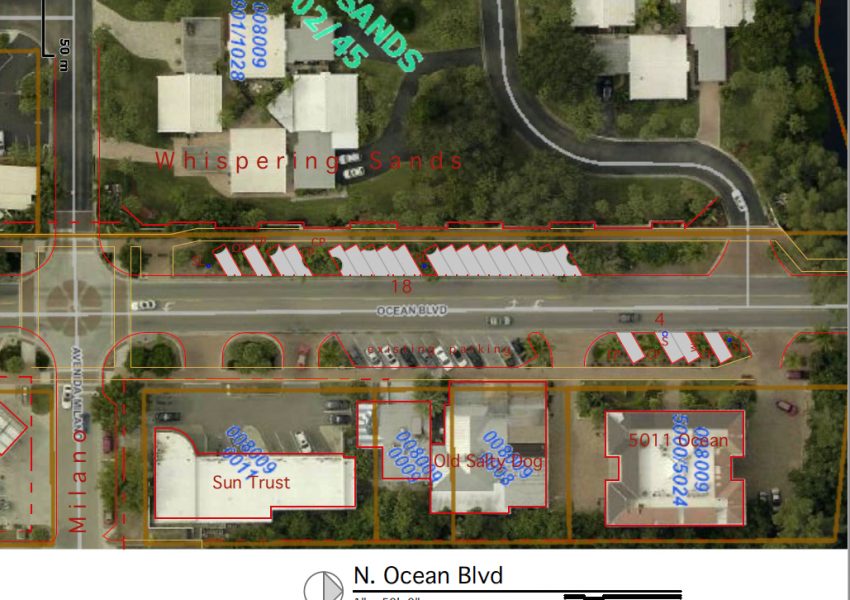 It took only about 15 minutes on an October morning for the Sarasota County commissioners to lay the groundwork for 22 new public parking spaces on Ocean Boulevard on the northern end of Siesta Key Village.

They unanimously directed County Administrator Jonathan Lewis to work with Public Works Director Spencer Anderson and Anderson’s staff on a report with details about how the parking could be configured, as well as the expense.

Siesta architect Mark Smith, who pointed out that he was representing the Siesta Key Chamber of Commerce, stepped to the podium during the public hearing period of the board’s regular meeting on Oct. 6 to talk about the Ocean Boulevard proposal. Smith noted that discussions began about five years ago with Commissioner Alan Maio.

Smith added that, in 2015, he and Maio “got together with other Village businesses” to discuss how to expand public parking in the Village. “Recently,” Smith continued, “this has come back to us.”

Smith showed the board members a concept he had created, which allows for 18 spaces on the west side of Ocean Boulevard, across from the Old Salty Dog restaurant. The spaces could be created in public right of way between coconut palms and street lighting fixtures, Smith noted.

Another four spaces, Smith said, could be placed in the public right of way in front of the building located at 5011 Ocean Blvd., next to the Old Salty Dog.

“Parking is a premium on Siesta Key,” Smith pointed out, “and this, we believe, is a good solution … What we’d be removing is palmetto and cabbage palms.”
As a member, too, of the Siesta Key Village Maintenance Corp. — which represents the Village property owners who pay for the upkeep of the shopping and dining area — Smith further noted, “We have concerns over safety” in the area where the spaces could be created. Because the palmettos “got rather large,” he said, “you lose visual contact with the street” along the sidewalk.

Moreover, he continued, “We’ve had incidents of homeless camps showing up in [that part of the right of way].”

Given the fact that the Whispering Sands condominium complex’s wall is next to the sidewalk, and landscaping covers the right of way, Smith said, the situation can get “a little spooky at night when you’re trying to go down the sidewalk.”

Smith wrapped up his comments by asking that the commissioners consider directing county staff to analyze his proposal. “We have met with Spencer Anderson and Jonathan Lewis out there,” he noted. “They need your direction in order to proceed, so you can work it into your budget … We would greatly appreciate you helping us out here.”

Then, Commissioner Maio explained that Smith was correct in explaining that the initial discussions about the parking spaces arose five years ago. The county did survey the area, Maio continued; that work determined that the spaces indeed would be in the public right of way.

“The test is across the street,” Maio added, referring to Smith’s proposal for angled parking in the right of way. Angled parking also exists in front of the Old Salty Dog, Maio said, “and it has not impacted anything.”

“I’m fully in support of this,” Maio told his colleagues.

Then, Commissioner Ziegler noted that he also went to the Village to take a look at the site. “I don’t see any issues with this,” Ziegler said.

“This is great,” Commissioner Charles Hines added. Chair Michael Moran offered his approval of the idea, as well.

Maio ended up making the motion to direct staff to look into the proposal. Staff could complete that assignment within 30 days, County Administrator Lewis said. Then the board could decide on the next steps.

Five years ago, Maio pointed out, “We didn’t have the money for this.” Five years later, Maio said, “We’ll find the money.”

After word began circulating during the summer that the Siesta Chamber was reviving the parking proposal for Ocean Boulevard, leaders of the Siesta Key Condominium Council (SKCC) sent an Aug. 12 email blast to their members. It contained a letter that the Council had sent to Anderson of Public Works and to the commissioners.

The letter pointed out that Council, “with approximately 100 Siesta Key Condominium members,” had learned of “interest in adding 18 parking spaces on Ocean Blvd. across from Salty Dog and next to Whispering Sands Condominium.”
SKCC Vice President Diane Erne had spoken with Commissioner Maio and Anderson, the letter added, “to express significant safety and aesthetic concerns about this possible expansion … The Siesta Key Condominium Council by this [letter] is on record as against this idea or plan and recommends this be dropped from consideration.”
Siesta Key Association (SKA) leaders also object to the proposal, President Catherine Luckner said. “There’s going to be a rousing ‘No,’” she added, noting that she had been unaware Smith was planning to address the commissioners that morning.

That part of Ocean Boulevard, she explained, is “a calming area” for traffic.

The right of way abuts the Whispering Sands complex, Luckner pointed out, which could lead to disruptions for residents of that community. The spaces would be next to their points of ingress and egress, Luckner noted.

She also voiced worries about people having to back out of the spaces, calling that situation “very dangerous.”

Moreover, Luckner said, the affected section of sidewalk is one of the few wide enough for pedestrians and bicyclists to share with ease, “and we need to keep those wide spaces.”

“I think that we will send letters of grave disappointment,” Luckner added, referring to communicating the SKA’s views to the commissioners.