Not the usual start to the morning 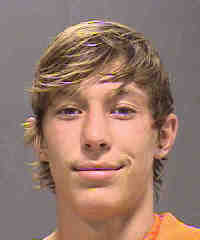 Siesta Village business owners were abuzz the Saturday after July Fourth, Siesta Sand learned, because of a rather unusual incident at Siesta Center.

Just after 8 a.m. on July 7, according to three related Sheriff’s Office reports, deputies were called about “two suspicious suspects sleeping on a bench at 5053 Ocean Blvd. in Sarasota.”

As it turned out, one of them was a 15-year-old Sarasota resident who later admitted to having been a lookout while the other one, a 19-year-old, allegedly broke into vehicles on the Key.

The younger one, Riley J. Willhite, was released to the Juvenile Justice program later that day, one Sheriff’s Office report said.

The older one — Noah T. Mason-Forke of Harrison, Ark., was still in jail in mid-July in connection with the armed theft of a handgun from a vehicle and three drug possession charges, plus one count of Resisting Arrest without Violence, stemming just from what Sheriff’s Office personnel learned at Siesta Center. His bond on the handgun theft charge is $15,000, jail records said, while the total bond amounts for the drug charges was $2,500.

A check of other Sheriff’s Office jail records for Mason-Forke found four charges of Unarmed Burglary of an Unoccupied Conveyance, with bond set at $7,500 each for a total of $30,000.

Willhite was charged, as well, with Armed Burglary-Conveyance in that one handgun case, a Sheriff’s Office report noted.

Siesta Sand heard that a tenant in Siesta Center thought the two people were deceased. Therefore, the tenant called 911. An EMS unit came to Siesta Center, along with Sheriff’s Office personnel.

When Deputy Tracy Ross first arrived at the scene about 8:30 a.m., Ross found Riley J. Willhite “sitting on a bench talking to a fireman,” one Sheriff’s Office report said.

Then a member of the EMS crew informed the deputy that another male was in the rescue unit. Ross entered the unit, where Ross found Mason-Forke on a gurney; two EMS personnel were talking to him. “A small Reebok bag” was between Mason-Forke’s legs, the report added.

“I recognized the male from previous contact and asked him his name,” the deputy wrote.

Mason-Forke told the deputy his name was Noah, but the deputy noted in the report that the suspect “had trouble saying his last name.” Therefore, the deputy asked if Mason-Forke had any identification in his bag, and Mason-Forke said he did. An EMS crew member handed the deputy the bag.

When Ross — the deputy — opened the bag, the report said, Ross “observed a wallet and two pistols.”

After learning that the male in the EMS unit was Noah T. Mason-Forke, Ross asked Mason-Forke if he and Willhite had taken any drugs and, if so, if whether either was on the verge of an overdose. Mason-Forke replied, “No,” the report added.

The deputy secured the bag in the patrol vehicle, the report pointed out.

After the EMS crew let Mason-Forke out of the rescue unit, Ross escorted Mason-Forke to the patrol vehicle and asked him to have a seat. Mason-Forke “immediately took off running south,” the report said, so the deputy yelled, “Police! Stop!” and gave chase.

Moments later, after Mason-Forke was back in custody, the report added, Ross escorted Mason-Forke back to Ross’ patrol car. At that point, the report said, Mason-Forke asked whether he would be in trouble for possessing guns. “This statement was made without prompting or questioning by me,” Ross noted in the report.

Ross then arrested Mason-Forke for Resisting without Violence.

When Ross conducted a thorough search of the bag, Ross found a Makarov 9mm handgun, a silver Smith and Wesson 40-caliber handgun, an iPad “and illegal narcotics,” the report said. Ross also discovered “numerous items” with personal identification information from other individuals, including credit cards, Florida identification cards and merchant store membership cards, on Mason-Forke and in his wallet, the report noted.

At that point, Ross contacted the Sheriff’s Office’s Criminal Investigation Division, which took over the case.

Ross did point out in the report that Ross had taken an earlier report — on July 6 — regarding the theft of two handguns from a Higel Avenue address. That incident had occurred between July 3 and July 6, the Siesta Center report said. After Ross contacted the victim in the alleged handgun theft case, the victim was able to confirm that the serial number on the Makarov located in Mason-Forke’s bag matched the serial number on the weapon the victim owned, the report added.

As for the narcotics: a search of Mason-Forke’s bag “revealed a baggie of Marijuana containing 12.2 grams,” the report noted, so the deputy also placed Mason-Forke under arrest for Possession of Marijuana under 20 grams.

Additionally, the deputy found nine and one-half pills, which were identified as 2 mg Xanax doses. Therefore, the deputy also charged Mason-Forke with Possession of a Controlled Substance.

Finally, a white powder in the bag was tested and found to be methamphetamine; the bag had 16 grams of that, the report said.

Thus, Mason-Forke was charged with another count of Possession of a Controlled Substance.

As a result of the Siesta Center incident, deputies also connected Willhite to multiple burglaries, a related report explained. During detectives’ interview with Willhite on July 7 — with his grandmother present, the report pointed out — “Willhite confessed to taking multiple fishing poles” from a boat that was parked in the driveway of a home on Avenida Leona. A resident at the address had provided the Sheriff’s Office with a description that matched Willhite, the report said.

The boat belonged to Ray’s Tire Pro, that report noted, adding that that business is owned by Jacob Petty.

Willhite also admitted, during questioning, that he had acted as a lookout for Mason-Forke as Mason-Forke “entered numerous vehicles on Siesta Key,” one of the Sheriff’s Office reports said. Willhite further confessed to taking part in some of the vehicle burglaries with Mason-Forke, the report added.

Willhite and his parents were “Cooperative” during the investigation, the report noted.