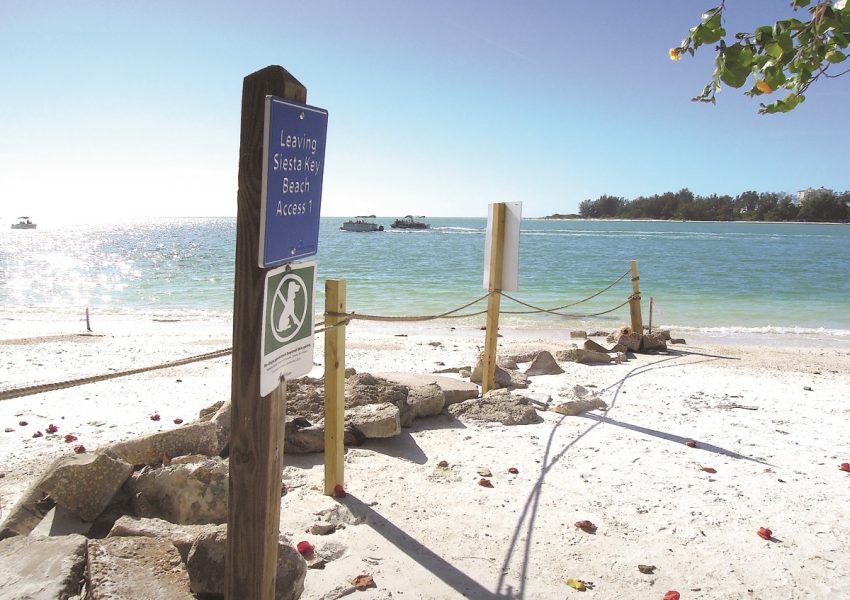 In August 2019, the Board of Directors of the Siesta Key Association (SKA) began working with the owners of the property at 3935 N. Shell Road — who are SKA members — to help them with safety issues, SKA President Catherine Luckner told about 80 members of the nonprofit during their regular meeting on Jan. 9.

Luckner disputed what she referred to as a “pretty aggressive narrative that had started” earlier that week. It indicated that those property owners — Greg and Michelle Olson — were trying to limit the public’s right to use Beach Access 1.

Luckner emphasized that Sarasota County’s Parks, Recreation and Natural Resources Department (PRNR) has no intention of limiting public access to the beach at the end of North Shell Road.

On Jan. 9, Luckner told the SKA members that, after visiting Beach Access 1, she could assure them that neither the lateral nor the perpendicular public access to the beach had been blocked off by a barrier the Olsons had erected. She encouraged members to take a look at the situation for themselves.

During a Jan. 7 telephone interview, Luckner told SNL she had seen videos the Olsons had taken of incidents at North Shell Road that had prompted their calls for law enforcement assistance. “It’s horrible,” Luckner added of the general situation for homeowners on the road. “We have to make it a safe place.”

In addressing the SKA members on Jan. 9, she said, “I think I speak for all of you in that we don’t want anybody to be disenfranchised from a place of peace where they live.”

On Jan. 7, Kaitlyn R. Perez, community affairs director for the Sarasota County Sheriff’s Office, told SNL that from July 1, 2019 to that day, the Sheriff’s Office had logged “a total of 92 calls for service on North Shell Road.” Since May 2017, she added, the total was 120.

“I do not have that broken down by year,” she explained in her email, “but can obviously tell you … the majority of calls have been since July 2019.”

In January 2019, the Olsons filed a petition with the county’s Traffic Advisory Council (TAC) in an effort to eliminate the public parking spaces for Beach Access 1 that exist between their property and the shoreline. In their narrative in that petition, they alleged repeated illegal drug and alcohol incidents along North Shell Road and at Access 1, writing that they and their neighbors “fear for our safety.”

They ultimately did not have enough signatures on that petition to make it valid, county staff told the News Leader in September 2019. County Public Records staff reported in January that the Olsons had not filed a revised petition.

Arguing for support of their TAC petition, the Olsons pointed out that they and their neighbors “continually find illegal drug paraphernalia (crack pipes, bongs, etc.) all along the street.”

In addition, they wrote, “[W]e have patrons [of the beach access] who regularly urinate and defecate alongside their parked cars in the aforementioned spaces. We have beer cans tossed over our privacy wall daily [and] several neighbors have documented vandalism at their homes which was the result of constant attempts to trespass (jump our privacy walls), again by high and intoxicated individuals.”

The couple has constructed a barrier along their property line to try to prevent people from trespassing.

Midafternoon on Jan. 7, Michelle Cellini, special projects administrator for Sheriff Tom Knight, sent an email to Michelle Olson, responding to comments Olson had made in an email to the Sheriff’s Office. Perez provided the News Leader a copy of that reply from Cellini to Olson:

“As you know and we have previously discussed,” Cellini began, “the private and public area of a beach in Florida is difficult to determine and controlled by an ambiguous law. The Florida Constitution states that the title to beaches below the mean high-water line is held by the state in trust for all the people. Florida Statute 177.27(14) defines mean high water as ‘the average height of the high waters over a 19-year period. For shorter periods of observation, ‘mean high water’ means the average height of the high waters after corrections are applied to eliminate known variations and to reduce the result to the equivalent of a mean 19-year value. … This is the law provided to us as we train and instruct deputies how to rightfully respond to calls for service at the many beaches in Sarasota County.”

“As I’m sure you recall when the Sheriff and I visited your property last summer,” Cellini continued, “we discussed various issues you were having. … [W]e recommended you work with the local government to determine your private property areas. We did not recommend that you place a barrier yourself, as it could possibly cause additional problems.”

Cellini also noted that during the year before the Olsons purchased their Shell Road property, the Sheriff’s Office received fewer than 10 calls for service from that area.