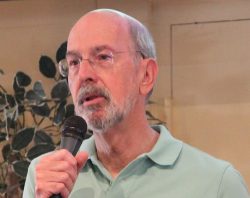 About 150 Siesta Key Association (SKA) members and invited guests — perhaps the nonprofit’s largest attendance figure ever — welcomed a new president on March 3 and provided rounds of applause as he discussed major issues on which the SKA will continue working.

Vice President Catherine Luckner passed the president’s gavel to Gene Kusekoski, who joined the SKA board in early 2017. Among the organization’s top priorities, they said, are preventing the proposed dredging of Big Sarasota Pass to renourish South Lido Key Beach and fighting to preserve current street setback regulations for commercial buildings on the island. 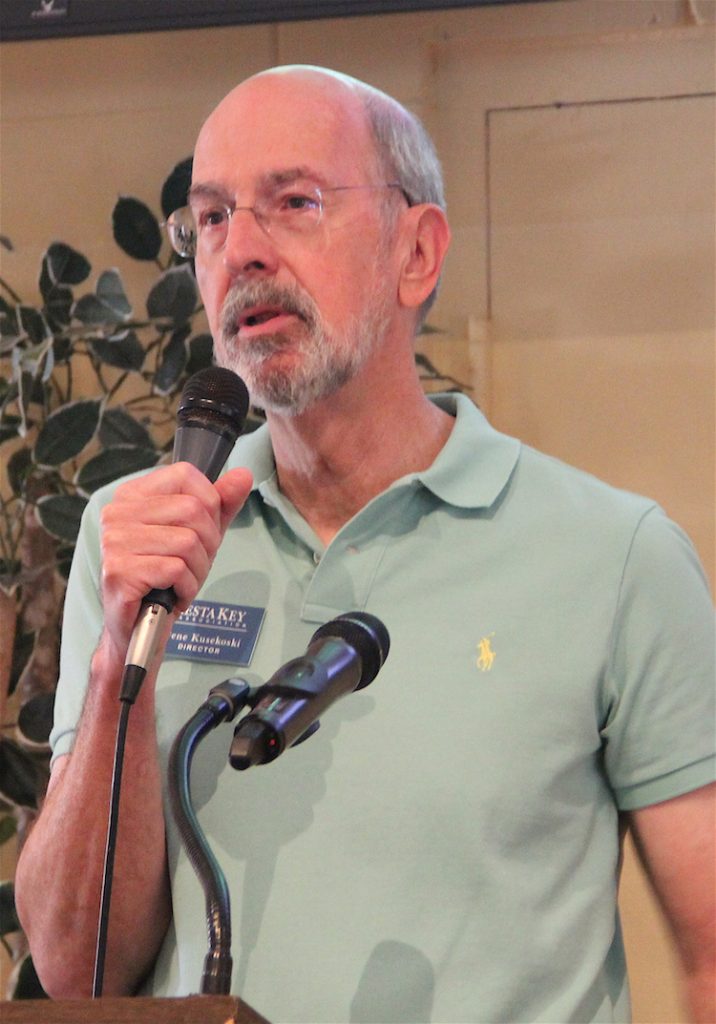 “There are a lot of places you can go to get a city life,” Kusekoski pointed out. “This doesn’t have to be one of ’em.”

He was referring to a petition submitted to the county that would allow developers to have the flexibility to erect new commercial structures as close as 2 feet from the sidewalk. The Siesta Key Overlay District (SKOD), which governs zoning on the island, calls for a minimum of 25 feet and a maximum of 42.5 feet, based on the height of the proposed building.

On April 11, the County Commission was scheduled to continue a public hearing that began Jan. 30 on that petition. The proposal for amending the SKOD was submitted by the owners of Clayton’s Siesta Grille on Old Stickney Point Road. However, many island residents note that Dr. Gary Kompothecras, known for his 1-800-ASK-GARY advertising for his chiropractic clinics, has been working since late 2016 on a plan for a boutique hotel on property Kompothecras owns on Old Stickney Point Road.

During a question-and-answer session that was part of the March 3 annual SKA breakfast meeting, Commissioner Alan Maio — who represents Siesta — vowed to the audience, “I am not gonna vote for a 50-, 60-, 80- — whatever your imagination — … I am not going to vote for those types of buildings 2 feet from the sidewalk.”

However, he added, he is waiting to see the revised proposal county staff will present on April 11, following board-directed collaboration between staff and Charles D. Bailey III, the attorney for Clayton and Diane Thompson of Clayton’s Siesta Grille.

The petition attorney Bailey filed last year called for giving the County Commission flexibility to decide on setbacks for new commercial buildings on Siesta Key as part of a special exception process.

Some emails he had received on the issue, Maio told the SKA members, have cited plans for a new hotel standing as tall as 125 feet. Yet, county zoning regulations impose a maximum height of 85 feet for any new structure on a barrier island.

During his remarks, Kusekoski talked of other issues on which the SKA will keep its focus. It “will continue to oppose any project that increases or makes worse the already crushing traffic problems that we’re having,” he said.

“The trolley has been a great success,” he noted, referring to the free Siesta Key Breeze, which the county launched on March 20, 2017.

The SKA also will continue to work with the county commissioners and county staff to find other means of reducing the number of vehicles on the island’s roads, he added, in an effort to “help people enjoy the beach more.”

Those measures could include park-and-ride facilities, he noted, and safer biking options. He emphasized, “There’s a lot of work to do still” in regard to the latter.

Finally, he said, the SKA “will continue to work on establishing a rational, civil and constructive dialogue on any of the issues we are working on.” The goal, he added, is for everyone to be treated “with the dignity and respect they deserve.” Attacks should be focused on issues, not individuals, he stressed.

“We take some strong positions, Kusekoski said, “but they will continue to be based around facts, civility, dignity and respect for all parties. Some people may feel we’re too low-key,” he conceded, “and we respect their right to pursue alternative approaches. Sometimes it takes a variety of approaches to achieve the goal.”

Along with Kusekoski and Luckner, the SKA officers for 2018 are Joyce Kouba, secretary, and Robert Miller, treasurer; both are returning to those positions. Kouba is one of the longest-serving directors; she has been secretary on and off for the past 10 years. The other directors are Dan Lundy, Marilyn Romanus, Bob Stein and Joseph Volpe.

The next phase of the Big Pass battle

The latest news regarding Big Pass, Luckner told the audience, is that late on March 2, the Florida Department of Administrative Hearings (DOAH) finally made available the last segment of the certified transcript of the hearing held in December 2017.

That started the 30-day countdown for attorneys of all parties in the case to prepare their written recommendations to Administrative Law Judge Bram D.E. Canter, suggesting how he should rule on challenges the SKA and Save Our Siesta Sand 2 (SOSS2) filed in January 2017. The judge told the parties at the end of the hearing, on Dec. 18, 2017, that he probably would take up to 45 days to issue his order after receiving the written attorneys’ briefs.

The SKA and SOSS2 have argued for years that the City of Sarasota and the U.S. Army Corps of Engineers (USACE) should find an alternate source of sand to use on South Lido Beach. Removing sediment from Big Pass approximately every five years over the 50-year life of the proposal the USACE released in September 2013 likely would lead to significant damage to Siesta Key, as the ebb shoal in the pass protects the island from storm damage, SKA and SOSS2 leaders have said, based on research that goes back decades.