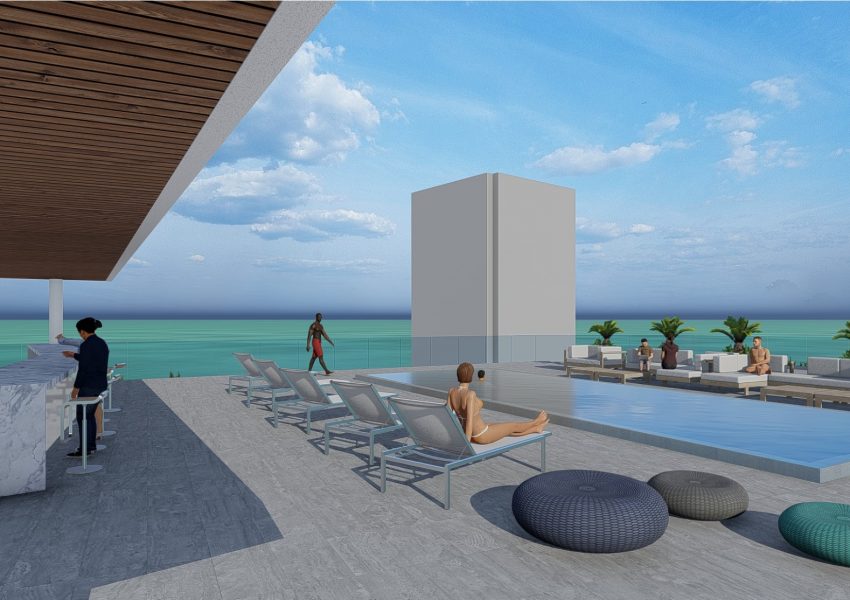 Several years from now, if developers are successful in securing approvals from Sarasota County, Siesta Key may be the home of two new up-scale hotels.

As the Siesta Sand first reported in July, 2020, the proposed Hotel Siesta Key would be an 8-story, 170-room, privately held, up-scale boutique hotel on Calle Miramar and Beach Road in Siesta Key Village. As required by the Sarasota County Planning Department, the Hotel Siesta Key development group is currently in the midst of presenting community meetings with business, civic and community groups. Led by Siesta Key realtor Robert T. Anderson, the meetings are required as part of the County’s Pre-Application process. Anderson reported that as of mid-October, 2020, his group has held some 60 individual and group video conferences with civic, community and business groups during the last six months, with more planned. A grass-roots group called the SK Coalition is fighting the proposal. According to a page devoted to the Coalition that appears on the Siesta Key Association’s (SKA) website, “a small group of owners in the area initiated a dialog to oppose the project, and from that core group a formidable coalition has emerged.” The SKA website’s “SK Coalition” page states that “the organizations involved include approximately a dozen Homeowner Associations(HOAs), the Siesta Key Association (SKA) and the Siesta Key Condominium Council (SKCC).”

Anderson told the Siesta Sand that he believes that there is very strong support for the hotel among business, community groups, and in the greater Sarasota region.

In the South Village, a second proposed hotel for a 120-room hotel at Old Stickney Point Road and Peacock Road, as well as a nearby 200-plus parking garage featuring retail space, is being proposed by Siesta Key resident and businessman Dr. Gary Kompothecras. Better known as “Dr. Gary,” he is the property owner, developer, and founder of 1-800-Ask-Gary. According to his representative Jim Ley, the group “submitted our pre-application package and we received feedback from the various staff disciplines.”  This month, he said, they plan to “file for the Special Exceptions required by the County” and will then begin to hold required Community Meetings. Discussing the hotel’s future clientele, Ley reported that “the owner has initiated a dialogue with Marriott. He is intending to franchise the hotel under one of their Collections line of flags.” Lay noted that both “The Art Ovation and the Sarasota Modern downtown are hotels operated under this Marriott brand category.”

Although both hotel development projects are in the early stages and possibly years away from completion, issues pertaining to land use, transportation, density, scale, as well as tourism and business development are being raised. Both hotel proposals seek significant zoning changes to the Sarasota County Future Land Use Policy in the County’s Comprehensive Plan.

During the Siesta Key Association’s October meeting, Siesta Key resident and real estate developer, Mark Spiegel addressed the group by video from Atlanta and expressed his concerns about the height, size of the structure and other issues. In late September, Spiegel released a press release on behalf of the Siesta Key Coalition stating that the group “does not oppose development on Siesta Key, if it is consistent with existing zoning regulations.” He wrote that the development would harm property owners and reduce property values due to hotel visitors.

When reached by the Siesta Sand for comment on Spiegel’s presentation and issues voiced by the Coalition, Hotel Siesta Key developer Anderson told the Siesta Sand that “we have been extremely methodical in the course of the project. This is a commercial piece of land, not a residential property. We have been working on this project for 11 years and would not have gone this far if we didn’t have support.”

When asked to discuss the issue of height, Anderson said that the issue is complex. The structure, he advised, is designed to meet FEMA requirements. “The proposed hotel will be a FEMA compliant structure that can set the standard for safety on a barrier island. Not many if any structures that house transient guests stand in compliance with current FEMA code,” said the developer. “The sight is contiguous. We have to build to the worst case scenario. With one-third of the property in the FEMA compliant category,” he explained, “this is a high wind area, requiring higher height. Due to wind velocity and proximity to the coast, the building has to be higher. The first habitable floor has to has to be 14-18 feet above grade, with grade being 5 feet. Therefore, we need to reach a 24 foot level for living space. We cannot have anyone living on any floor until we reach the 24 foot level.” He continued, stating that when complete, “the building will be about 82 feet and within code that is 85 feet.” Discussing the “As of Right” issue, Anderson said that ”As of Right development on the same contiguous site will still yield a structure with height in excess of 50. This,” he stated, “is in accordance with FEMA guidelines that run with the “subject” site itself. As of right we can build up to 58 feet.”

Responding to the Coalition’s concerns about traffic and congestion, Anderson said that “we looked at many alternatives for the property. Neighbors told us that they do not want a convenience store or a party deck. Talking to business owners and residents we determined that a beautiful hotel would enhance the area. This is an upscale hotel,” he noted. “The project was very specifically planned to compliment and not conflict with other businesses, including condominium rentals, retail shops, restaurants and bars. Hotel guests,” he said, “will come for a 2-3 night stay. They will park and walk to the village or beach. We are not in competition with condominiums or smaller hotels.” Citing strong support from barrier island families, mainland residents, tourism groups and businesses, Anderson cited the “folks in Lakewood Ranch who have expressed strong interest in having this hotel as a weekend getaway with all of the benefits of Siesta Beach / Village,” as an example.

The absence of up-scale hotel accommodations on Siesta Key has been an on-going topic of discussion among tourism officials and business owners for many years. Siesta Key Chamber of Commerce Board Chairman Mason Tush, III, of CB’s Saltwater Outfitters, said that the issue is under discussion and as of mid-October, the Chamber had not made a public stand. Visit Sarasota County President Virginia Haley told the Siesta Sand that “ I would say in general that there has always been a demand from visitors and international tour operators for a full service hotel on Siesta.” She noted that the Board does not take positions on specific proposals.

When County Commission passed a zoning change in 2018 that made it possible for Dr. Gary to proceed with plans to build a hotel on Stickney Point Road and Midnight Pass, the decision led to mixed reactions among residents and local businesses. As that project begins to move ahead beyond its current “entitlement phase,”Ley said that “we hope to break ground in 2022, and are finalizing the site plans necessary for the special exception request.” After completing the pre-application appearance before the County Development Review Committee and following completion of the site plan, they too will begin Community Meetings. Looking ahead, Ley believes that the creation of the 120-room South Village hotel will appeal to European travelers and tour groups. “Tour bookers,” he said, “have long expressed a concern that the lack of a flagged hotel on Siesta Key has been a limiting factor in organizing charter bookings into Sarasota Bradenton International Airport. This will be one of only two hotels on the Key.”