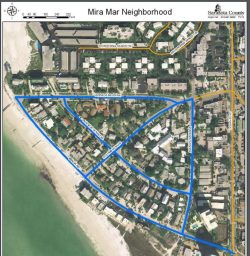 Thanks to a unanimous County Commission vote on April 10, the Mira Mar neighborhood on-street parking permit program will remain in effect indefinitely.

Prior to that April 10 vote, the program was set to expire on Nov. 1.

A staff memo written for the commission in advance of the public hearing explained the reasoning behind the staff request for deletion of the sunset provision.

After the county’s Traffic Advisory Council considered the request, that board recommended the County Commission take the step residents were seeking, the memo pointed out.

“As a result, on June 20, 1995, a residential permit parking area was established for the [Mira Mar] neighborhood,” the memo said. The ordinance included language calling for the program to sunset in one year. Some of the subsequent, similar ordinances for the Mira Mar parking permit program had sunset dates and some did not, the memo explained. Most recently, on Aug. 26, 2014, the commission approved the ordinance that was set to expire on Nov. 1.

The memo added, “The residential permit parking enforcement helps protect the area from excessive noise and unreasonable burdens to gain access to residences, while preserving the character of the area, and promoting efficiency of the maintenance of the neighborhood streets in a clean and safe condition.”

This program “also helps to preserve the value of the property in the area,” the memo noted, “and provides for greater pedestrian and traffic safety, clean air and the comfort, health, convenience and welfare of the Mira Mar neighborhood.”

Signage in the area notes the necessity of parking permits, the memo added.

During recent staff updates to the affected property owners, the memo noted, staff found continued support for the parking prohibition. The memo also pointed out that the owners wanted to see the sunset provision removed from the ordinance, and county staff did not object to that.

No member of the public signed up to address the board during the hearing on April 10.