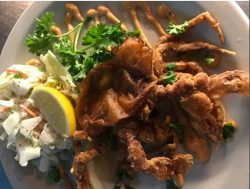 One of the sweetest, most tender and mouthwatering foods in the world is the white succulent meat from a Crab. Sometimes you have to work for it but a mouth full of butter dipped crab meat is one of life’s greatest pleasures.

As of May 15th we Floridians say goodbye to our beloved Stone Crabs and hello to the Southern Soft Shell Crab. The end of a good crab season is always disappointing but it is not the end of the world. When one crab season ends, another begins. On the west coast from Seattle, Washington to Vancouver, Canada the Dungeness crab season is now open and provides a delicious crab feast. Right around the corner it’s ON in Alaska as the King Crab and Snow Crab captains gear up to set sail.

As the Stone Crab traps come to shore, they will be replaced by the buoy of the Blue Crab traps that will be strategically placed in our waters. Unlike in Maryland, these swimming crabs are a tough catch in Florida as Blue Crabs are not overly abundant in this area. It’s estimated that one-third of the nation’s catch of Blue Crabs come from the Chesapeake Bay area. People from Maryland love their crabs. One thing we have learned here at Big Water Fish Market is that a discussion comparing crab cake recipes with Maryland folk is always a losing battle.

I have spent many afternoons or evenings picking away at Blue Crabs. If you have ever picked through the calcified shell of a Blue Crab in search of that tender meat, you know that it’s hard work. As a matter of fact, I feel like it’s a lot of work for very little reward and frankly I find it to be boooooring. That’s why I get excited when the weather warms up and the southern cities like Charleston and New Orleans Gulfport’s deliver a crop of floppy Soft Shell Crabs to Florida. 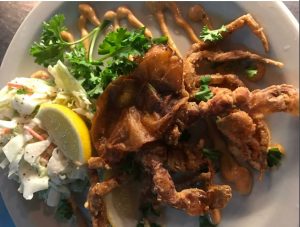 Now the Soft Shell Crab is a meal. You eat the whole crab and every bite explodes with crab juiciness. Soft Shell crabs are Blue Crabs harvested right after they shed their exoskeletons. Once they have busted out of their old shells, replacements begin to regrow and the new shell will begin to harden within hours. The trick to harvesting Soft Shell Crabs is to catch them in the transitional stage. Fishermen typically capture the crabs before they molt and hold them in cages in the sea or saltwater tanks instead of scouring the ocean. As soon as the crabs drop their shells they are removed from the water which stops a new exoskeleton from hardening as these creatures of the sea become people food.

All Soft Shell Crabs will come from your local retail fish counter either fresh or frozen. Most Soft Shell Crabs are frozen within minutes after being removed from the water and cleaned. If you’re lucky enough to find actual fresh live Soft Shell Crabs, that’s the way to go. Live crabs should still be moving and smell like an ocean breeze. Any good fish monger can clean your fresh crabs for you in a matter of minutes. A few snips with a pair of scissors and your crab will be ready for this delicious Southern Fried Soft Shell Crab recipe.

·         Dip your cleaned soft shell crabs in an egg wash then dip and coat with breading mixture of flour, Creole Seasoning, salt and pepper.

·         Sprinkle with Creole Seasoning, salt and pepper to taste.

·         Serve over grits, salad, veggies or as the popular Soft Shell Crab sandwich.