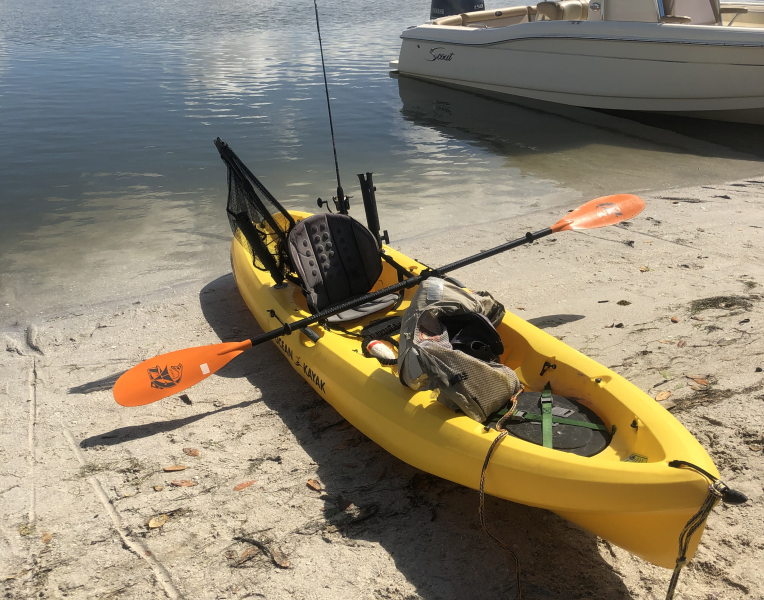 For many a winter I gave Siesta Key beaches, bike paths and roads the run-around preparing for the 26 Boston Marathons I ran. Now I have nothing more to prove these days other than to bike on Siesta beach and to kayak around, circumnavigating Siesta Key.

After visiting my parents all those years, I am a proud second generation condo owner. Waiting now for that right day, tide and weather-wise to replicate my first kayak around Siesta Key.

That would be leaving on an outgoing morning tide, from under the Stickney Pt. Bridge north, past Phillipi Creek toward Sarasota Big Pass. After a few miles of mangroves, I cut inside of Bay Isle by entering the Hansen Bayou from Roberts Bay. The Hansen Bayou is a canal short cut to the Big Pass between North Siesta Key and Bay Isle. There is a “low” bridge Siesta Drive/758, crossing overhead.

First landing was on a popular sand spit before leaving the Sarasota Big Pass. Then a 3.5 nautical mile Gulf of Mexico journey south to Midnight Pass. The Rhumb Line direct to the closed up Midnight Pass takes one about 1/2 mile off Crescent Beach and Point of Rocks. A Gulfside “bail out “would be landing on Crescent Beach near Beach Access #12.

Divinely, the Gulf wind gods prevail lightly from the west, as it happens “onshore” on many a Sarasota afternoon. My crash landing onto Midnight Pass beach was “controlled,” getting the kayak onto the beach with the assist from a beachgoer before I got up and out of the Gulf. There is a 2 foot drop-off/climb up onto Midnight Pass beach. Took me five minutes floating with my life vest “chillin” before climbing out of the Gulf.

After a few Gulf beach moments, dragged over sand my Ocean 11 foot Scrambler kayak from the Gulf to the bay, where there was a water flowing Midnight Pass some 30 years ago. From Palmer Point, bayside of Midnight Pass kayaked through the Neville Nature Preserve, past the abandoned Mote Marine shark tanks, then cruised past the outlet of Turtle Beach Lagoon before landing at Turtles Restaurant for air conditioned refreshments. After about an hour nursing two soda waters, got back onto the sit-on-top kayak, without ever drinking the Margarita I also ordered.

From Turtle’s Restaurant, kayaking the Siesta Key side of the busy Intercoastal Waterway channel, it is just 3+ nautical miles north, back to the Stickney Pt. Bridge. I traveled a total 15 nautical miles in seven hours, total time.

Circumnavigating Siesta Key by kayak provides a most unique tour of its natural beauty as well as waterside housing. The multitude of mangroves, bayous, canals and lagoons makes for plans of future, shorter Siesta Key kayak explorations.

Siesta Key Bike & Kayak can assist in kayak & paddle board rentals. Launch off the beach into the Gulf, the Intercoastal Waterway by the Stickney Pt. Bridge, or at the Turtle Beach lagoon.