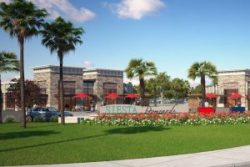 Benderson Development Co. is considering reducing the number of residential units in its proposed Siesta Promenade project from more than 500 to a level between 300 and 350, according to a Pine Shores Neighborhood Alliance representative.

At the same time, staff of the Florida Department of Transportation (FDOT) has asked a consultant for Benderson to evaluate whether a roundabout at the intersection of Stickney Point Road and Avenue B and C would be the best way to handle the expected increase in traffic if the mixed-use development is constructed at the intersection of U.S. 41 and Stickney Point Road.

In an April 13 email she sent to Pine Shores residents — whose neighborhood is adjacent to the approximately 24-acre Siesta Promenade site — Sura Kochman reported that she recently had talked with Todd Mathes, Benderson’s director of development. He told her the firm is analyzing two new prospects for the project:

Mathes did not respond to a number of messages SNL left him, seeking comment.

During the April 6 Siesta Key Association (SKA) meeting, Director Gene Kusekoski reported not only that Benderson is considering the reduction in residential density but that it also might focus on petitioning for Commercial General zoning instead of pursuing the Critical Area Plan (CAP) designation it applied for last year. Although fewer dwellings would be preferable, he noted, if Benderson opted simply for the rezoning, it would not be required to pursue the traffic studies authorized under the CAP process. Kochman has made that point numerous times, as well.

Noting the same number of residential units Kochman referenced in her email to Pine Shores residents, Kusekoski further told the SKA members that if Benderson does opt to go with a rezoning petition, “[that figure is] probably realistically about the best you could expect, and they have a right to do this.”

Based on her math, she continued, both of the new options would constitute a density of 18 units per acre, which is higher than the 13 allowed in a county district zoned Commercial General (CG). The density would include any hotel units, she added, each of which equates to half a residential unit.

Because the site encompasses 23.4 acres, Kochman wrote, Benderson would be entitled to a total of 304 units under CG zoning. That could equate to 250 residential dwelling units, plus a 108-room hotel, plus the retail/service shops, she noted.

During a June 2, 2016 presentation to SKA members, Mathes talked of the firm’s plans for four buildings with a total of about 600 dwelling units — primarily one-bedroom rental apartments and condominiums — and a 150-room hotel, which he said most likely would be a Marriott or Hilton “product,” along with the 140,000 square feet of retail space fronting on U.S. 41.

He pointed out that the current zoning for the property allows for up to 300 mobile homes.

At that time, Mathes also talked of Benderson’s decision to seek county approval for a Critical Area Plan that would encompass the site.

Following a Jan. 25 discussion, the County Commission voted 4-1 to approve staff proposals for specific analyses Benderson would need to complete in its effort to obtain Critical Area Plan (CAP) approval for Siesta Promenade. Among them were traffic studies of the surrounding area conducted during the peak of tourist season. (Commissioner Nancy Detert, who voiced her objections to the proposed development, cast the lone “No” vote during the meeting.)

Mathes told SNL after that discussion that the firm was going to “start right away” on the entire scope of work staff had outlined. Later, during a Feb. 16 telephone interview, Mathes said that the Kimley-Horn and Associates consulting firm had begun the data collection on the firm’s behalf. The traffic studies were expected to continue through February, Mathes noted. “From there, we’ll produce the report,” Mathes stated, anticipating that would happen before the end of March.

When SNL checked recently with county staff, spokesman Jason Bartolone wrote in an April 10 email, “Nothing has been submitted, and staff has received no timeline of when materials will be submitted.” Bartolone added, “There has been no discussion with staff with respect to the project not utilizing the CAP. Planning Services is awaiting submittal of updated applications.”

In her email to Pine Shores residents, Kochman also wrote that she had talked recently with Todd Dary, the county planner supervising the Siesta Promenade project. He “expects that no hearings before the [county] Planning Commission or the [County Commission] will take place until sometime in the fall.”

As Kimley-Horn has been working on new traffic studies for Benderson, the potential of a roundabout at the intersection of Avenue B and C and Stickney Point Road has arisen, based on documents provided to SNL.

In a March 17 letter to Nathan Kautz of FDOT’s District One staff, Kimley-Horn Senior Vice President Christopher Hatton and Project Manager Adam Gibson responded to a March 10 FDOT letter regarding the department’s review of the Siesta Promenade CAP application. They acknowledged that the firm would look not only at the potential need for a traffic signal at the Avenue B and C intersection but that it also would evaluate whether a roundabout might be more appropriate.

Furthermore, Hatton and Gibson acknowledged FDOT’s request that Kimley-Horn address the potential for increased queuing of southbound traffic on U.S. 41 in regard to a proposal for a Siesta Promenade driveway from U.S. 41.