Beach Road plans to appear back before County Commission 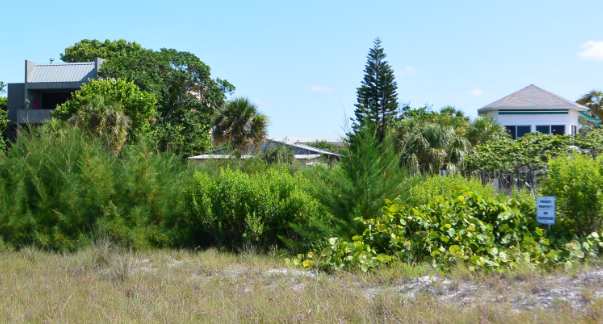 The property owners will now have another shot.

Following a nine-month, mediation-led appeal process, a new Coastal Setback Variance request will be appearing before the County Commission. And, once again, commissioners will grapple with the question of whether to allow the property owners to build, or not, at the 7,429-square-foot property.

At their March 31 regular meeting, commissioners gave the go-ahead for a public hearing on yet-again-revised construction plans, although a date has not been determined for the public hearing. The vote was 4-1, with Commissioner Charles Hines casting the lone No vote.

The upcoming hearing will be the fourth time the County Commission considers a residential project at the address.

Over the past nine months, 162 Beach Road was at the center of a special-magistrate-mediated effort between county legal staff and the Allens, who had appealed the 2014 rejection of their request for a Coastal Setback Variance. Their request for relief was filed under a state provision called the Florida Land Use Environmental Dispute Regulation Act. (FLUEDRA).

At the March 31 meeting, County Attorney Steve DeMarsh and Assistant County Attorney David Pearce presented the findings of Carlos Alvarez, the appointed mediator in the case. Alvarez recommends a settlement calling for the county to allow the property owners to construct a smaller home, reduced in square footage by about 10 percent, down to 2,779 square-feet. The amount of pavers would also be reduced by 40 percent.

Alvarez wrote in his March 20 findings: “I am very pleased that after detailed discussions between your staff and the Allens and their representatives involving collection of data, detailed analysis of the data and proposal of several iterations of site plans, an ‘acceptable solution’ has been found regarding the residential structure proposed by the Allens.”

The Allens’ effort to build on the lot goes back to 2013. Some residents in the Village say the outcome of this effort could impact their properties—altering beach erosion and harming real estate values—and could have a wider effect across Siesta, as 22 other properties throughout Siesta Key are located past the Coastal Setback Line.

In January, 2013, Ronald and Sonia Allen’s plans to build a three-story home were turned down by county commissioners. Then the Allens submitted revised plans for a smaller, two-story house July 10, along with a new application for a Coastal Setback Variance. In April, 2014, the Sarasota County Commissioners again unanimously denied their request for a the setback variance allowing them to build on the lot.

A threat of legal action hung over the discussion March 31.

County Commissioner Alan Maio asked county legal staff what happens if commissioners “do nothing” and don’t hold a public hearing.

“What you would probably risk,” replied Pearce, “is a lawsuit from the owners of the property seeking the remedy of inverse condemnation, perhaps a Harris Act Challenge.”

The legally-powerful Harris Act often strikes anxiety among some elected officials. The law protects property owners from who can make the case that a government entity “inordinately burdens” a property, significantly reducing the property owner’s rights and investment potential.

There was little discussion among commissioners, and no talk about either the property or the merits of allowing construction of a residential structure. Commissioners Maio and Hines noted that a “Yes” vote only sets a public hearing.

“My understanding is that all we are approving is your request” to hold a public hearing, Maio said to DeMarsh.

“We would have another hearing,” Hines said.

According to county staff, a public hearing date cannot be set until the Allens officially file a new application requesting a Coastal Setback Variance.