Wastewater Update on the Key 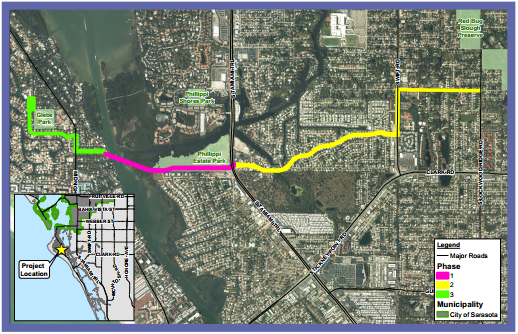 It will take four phases of construction work to decommission an aging wastewater plant.
By Roger Drouin

At the end of Shadow Lawn Drive, there is a gate. On the other side, sits a wastewater treatment

plant that was built decades ago, and now is located in the middle of the residential neighborhood of Siesta Isles.

Although mostly hidden from view, noises and sometimes odors emanate from the plant. Numerous trucks pass through with chemicals used to treat wastewater. But that won’t be the case once Sarasota County completes a $9.1 million project to decommission the Siesta Key Wastewater Treatment Plant and replace it with a modern and much smaller lift station.

“All the old buildings and old tanks will be removed,” said Dave Cash, water/wastewater division manager for Sarasota County. “You won’t have all the noises, and traffic and chemical trucks coming in and out of there. It should be a much more passive installation there.”

The county plans to decommission the old wastewater plant by December, 31, 2016. That plan has to come to fruition in order to meet an agreement with the Florida Department of Environmental Protection (FDEP), which is mandating shutting the facility down.

The treatment plant is a remnant of a previous type of wastewater treatment. It is the only wastewater facility currently in the county that treats water and discharges it into a waterway. In this case, the treated wastewater is released into Grand Canal. It was built before many of the current homes were constructed, Cash said.

As part of an agreement with the Siesta Key Water Authority franchise utility, the county purchased the treatment plant in 2006, with the intention of replacing it with a lift station. “It was a utility authority established back in the 60s,” Cash said.

According to a Capital Improvement Project description, “The purpose of the Siesta Key Master Pump station and Force Main project is to replace existing facilities at the Siesta Key Advanced Waste Water Treatment Plant with a new master pump station and a force main to transfer wastewater flow to the regional Central County and/or Bee Ridge Water Reclamation Facilities.

The project to decommission the old wastewater plant requires several phases of construction work stretching across a swatch of the county. According to a Capital Improvement Project description, the cost to design the overall improvement project is $1.05 million.

In order to connect to the wastewater system on the mainland, contractors need to construct three segments of a “force main” sewer pipe. The furthest phase of the force main away from the Key is already constructed. That segment extends from Lockwood Ridge (where it connects to another force main) to U.S. 41 near Phillippi Estates Park.

The second phase stretches from U.S. 41 under the Intracoastal Waterway. That phase of work will be sent to County Commissioners in January for approval. Simultaneously, a larger, parallel water main will replace a 40-year old pipe that is the main water pipe for the Key. “We felt since we will be there doing work [for the sewer main] to go ahead and install the water line,” Cash said. The old water line is a cast-iron pipe; that type of pipe last 50 years maximum in a salt-water environment, Cash said.

The final phase of the sewer force main will go from the Intracoastal to the current site of the wastewater plant.

The lift station to be built in place of the Siesta Wastewater Plant will be smaller and be able to pump a higher capacity of wastewater. Right now, design plans for the lift station are about “90 percent” complete, Cash said.

The plant handles an average of 2 million gallons of wastewater a day, but the new lift station is designed to handle more than 5 million gallons a day. That improved capacity will be beneficial during peak tourist season, spring break, or holiday weekends. “During peak demand we see flows much higher” than average, Cash said.

In the case of a storm, the lift station will lessen risks, and make it easier to pump wastewater off the Key in case equipment is damaged, Cash said. If the current plant was damaged during a storm, an entire temporary sewer plant would have to be brought in to treat the wastewater.

All three phases of the sewer main, along with the lift station, are part of the effort to take the old wastewater plant offline. “All of that needs to happen to decommission the plant,” Cash said. Once the new lift station is set up and tested by the county, the old plant will be demolished, Cash added.

There is a question of what to do with the remaining land at the end of Shadow Lawn once the new lift station is built. The property, which is just under 4 acres, fronts Grand Canal, and the new lift station will take a significantly smaller footprint than the treatment plant. The 10-acre Glebe Park is also close by.

The two options include: developing the property into several different alternatives for public use; or for the county to sell the land so it can be developed.

No decision will be made until the input of nearby residents and the community is considered, Cash said.

One possible park use raised previously by a resident who suggested it to former county commissioner Nora Patterson, who lives on Siesta Key, is a bicycle and pedestrian path to connect to other streets. That option could offer connectivity in the area. “With a path, they could get all the way to the beach without having to get through Midnight Pass Road,” Cash explained.

The board has also discussed the possibility of selling the property, in order to pay off utility bonds.

After input is gathered, all possible options would have to be vetted by the water/wastewater division along with the county’s parks and recreation department. The County Commission would have final say on what’s done with the property.