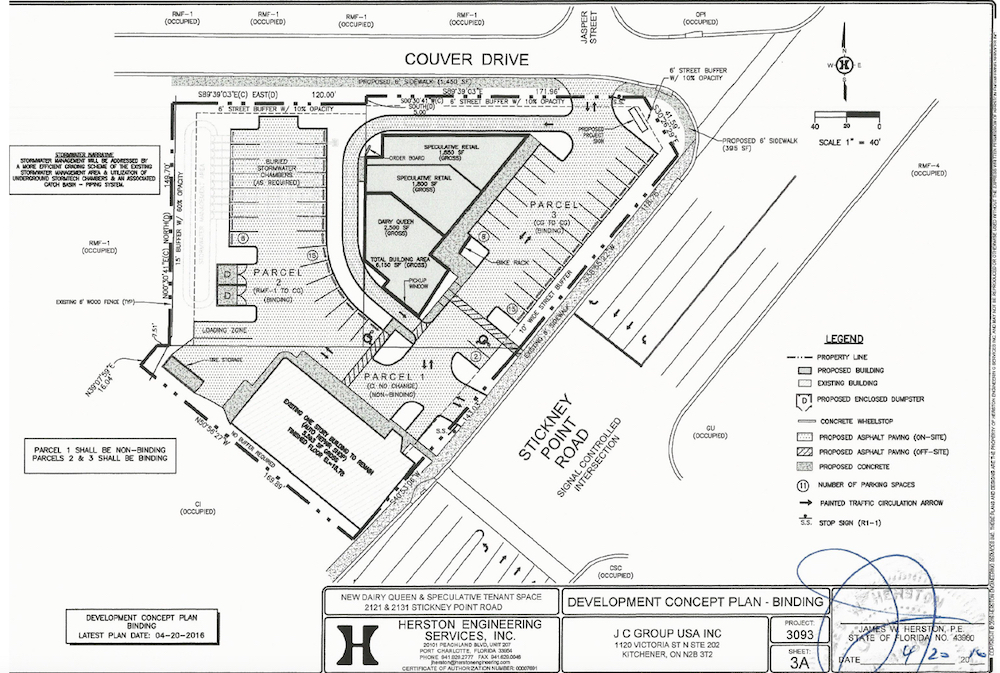 With so much attention focused on plans for Siesta Promenade less than a mile south, a proposed project on a property about one-sixth the size of the Benderson Development Co. site has remained in relative obscurity.

Representatives of the Florida division of an Ontario firm, JC Group, tentatively are scheduled to go before the Sarasota County Planning Commission on Sept. 15 to seek the rezoning of property at 2121 and 2131 Stickney Point Road so the company can build a new commercial center with a 50-seat Dairy Queen restaurant and drive-through window on part of the site.

“There is an existing demand for this type of commercial use given the property’s strategic location near the Gulf Gate Mall and the site’s ideal location at a signalized intersection,” says the application, which was submitted to the county’s Planning and Development Services Department on April 17. The property is across from the entrance to Sarasota Pavilion, putting it in close proximity to the U.S. 41/Stickney Point Road intersection. 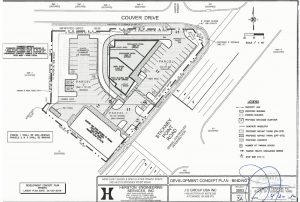 A new single-story, 35-foot-tall building has been designed with three leasable units on the 2131 Stickney Point Road land, the application shows. The units would range in size from 1,800 square feet to 2,500 square feet, Wilhelm stated. The largest one would house the Dairy Queen, he noted, while the other two are labeled as speculative retail uses.

Access to the site will consist of the existing driveway that connects with Stickney Point Road and a new access point off Couver Drive, opposite Jasper Street,” which is located north of the vacant lot, Wilhelm said.

A special exception granted in 2009 stipulated that no entrance/exit from part of the 2131 Stickney Point Road parcel would intersect with Couver Drive. That segment of the property — identified on the site plan as “Parcel 2” — contains the existing parking lot for the Firestone business.

As noted in the application, a transportation planning formula was used to estimate that the average number of vehicles per day accessing the property would be 301. During the morning peak travel time, the document says, 42 vehicles would be expected, with 48 percent of them entering the site. For the afternoon peak period, the estimate is for 31 vehicles, with 56 percent of them anticipated to be entering the property.

Asked to describe the “traffic impact area,” the application says, “A signalized intersection at the entrance of the property safely throttles movements to and from the site.” That traffic signal is across from the entrance to Sarasota Pavilion, at the intersection of Stickney Point Road and Gulf Gate Mall Drive.

Under the heading, Plan Compatibility, the application justifies the proposal by pointing to the ongoing Firestone operation, adding that a portion of the site was occupied by a service station in years past.

A neighborhood workshop on the proposal was conducted on April 6 at Gulf Gate Library, the application says. “The biggest concern expressed by the two (2) attending residents was related to knowledge and information on the project,” says a letter from James W. Herston of Port Charlotte, president of Herston Engineering Services. The letter was part of the application. Herston is listed in the document as the agent for JC Group USA.

One of the attendees, who lives on the east side of Stickney Point Road “was especially concerned with stormwater management facilities” located between Sarasota Pavilion and the multi-family development in which she lives, the letter adds. Herston did not return multiple messages SNL left him, seeking comments on the company’s plans.

County Planner Wilhelm pointed out too that the Firestone property is zoned Residential, Multi-Family 1, while the land at 2131 Stickney Point Road already is zoned Commercial General. The project proposal calls for rezoning the entire 0.96-acre site to Commercial General with a Development Concept Plan, which has to show all the buildings, parking, access and proposed drainage facilities. The county’s Zoning Code explains that when someone proposes rezoning property to a Commercial General (CG) district, the Development Concept Plan is binding.

In July 2014, JC Group USA bought the 32,790-square-foot site of the Firestone business for $1,050,000, county property records show. About three months later — in October 2014 — it purchased the adjacent, 23,728-square-foot empty parcel at 2131 Stickney Point Road. The price was $648,900, according to property records. More than five years earlier, JC Group USA bought a unit in the Palm Bay Club condominium complex on Siesta Key’s Midnight Pass Road, paying $425,000 for it.

According to its website, JC Group was established in 1960 as a builder of single-family homes in the Kitchener/Waterloo area of Ontario, but it has evolved over the years to handle other projects. Among them are restaurants, professional buildings, commercial and retail plazas and even golf courses. JC Group USA was organized in Florida in 1995, state Division of Corporations records show. Its president, the county application says, is Jerry Cybalski.