“We were tasked with designing a new prototype shade structure, not just the county standard that has been used since the 1970s,” said John Bryant, one of two architects to lead design work on the project. Although the typical wooden, “two-pole” structure seen at many county parks provides shade, county planners wanted something different that 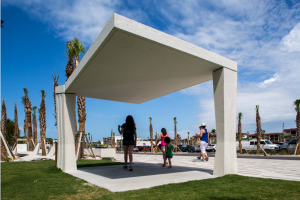 could both withstand the coastal conditions at Siesta Public Beach and shine architecturally.

Six years later, the new picnic shelters were revealed to the public, and in June the concrete structures—inspired by the Sarasota School of Architecture—were recognized by the Florida chapter of the American Institute of Architects as the winner of the Merit Award for an Object design. At a ceremony August 1 in Boca Raton, Sweet Sparkman representatives will accept the award.

The final design of the shelters, which opened to the public in the spring as part of the first phase of the Siesta Public Beach Improvements project, does more than bring just durability to the beach.

The concept was designed and engineered to allow light and shadows to play. The process, however, also resulted in an economical model, because after an initial mold was made, creating each of the 24 pre-cast structures became more cost efficient, Bryant said. “We had a set budget to work with,” Bryant said. 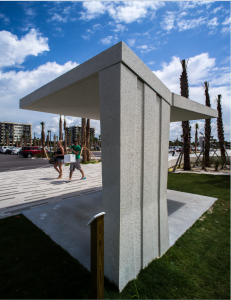 The American Institute of Architects design jury noted the efficiency of the design, praising “this object’s ability to meet both the need to be unique as well as the need to be easily replicated… ”

The picnic shelters were made of pre-cast concrete and assembled in St. Petersburg before being trucked via tractor-trailer flatbed to Sarasota, where cranes were used to lift the structures into place, Bryant said. The shelters were designed using a method of texturized, sand-blasted concrete to reflect the quality of the beach sand, and were strategically orientated with view and sunlight in mind, Bryant said.

In part, the structures are meant to blend with the looks of the Sarasota School of Architecture, including the historic Siesta Beach concessions pavilion, designed by Edward J. “Tim” Seibert, that is being renovated as part of phase two of the Siesta Public Beach Improvement Project. Siebert is a renowned architect, and the Sarasota region abound with examples of his bold, mid-century modernist design.

The shade shelters “are contemporary, but we looked at the architecture of the historic [concession] pavilion—and some of the lines and geometry are in that spirit,” said Bryant, who before joining Sweet Sparkman, worked for Kliment Halsband Architects in New York City, where he served as Project Architect for the Harvard Divinity School Master Plan, and Arcadia Commons, a new student center at Arcadia University.