County abandonment of 360-foot segment of North Beach Road sought, along with a variance for new construction in the same area 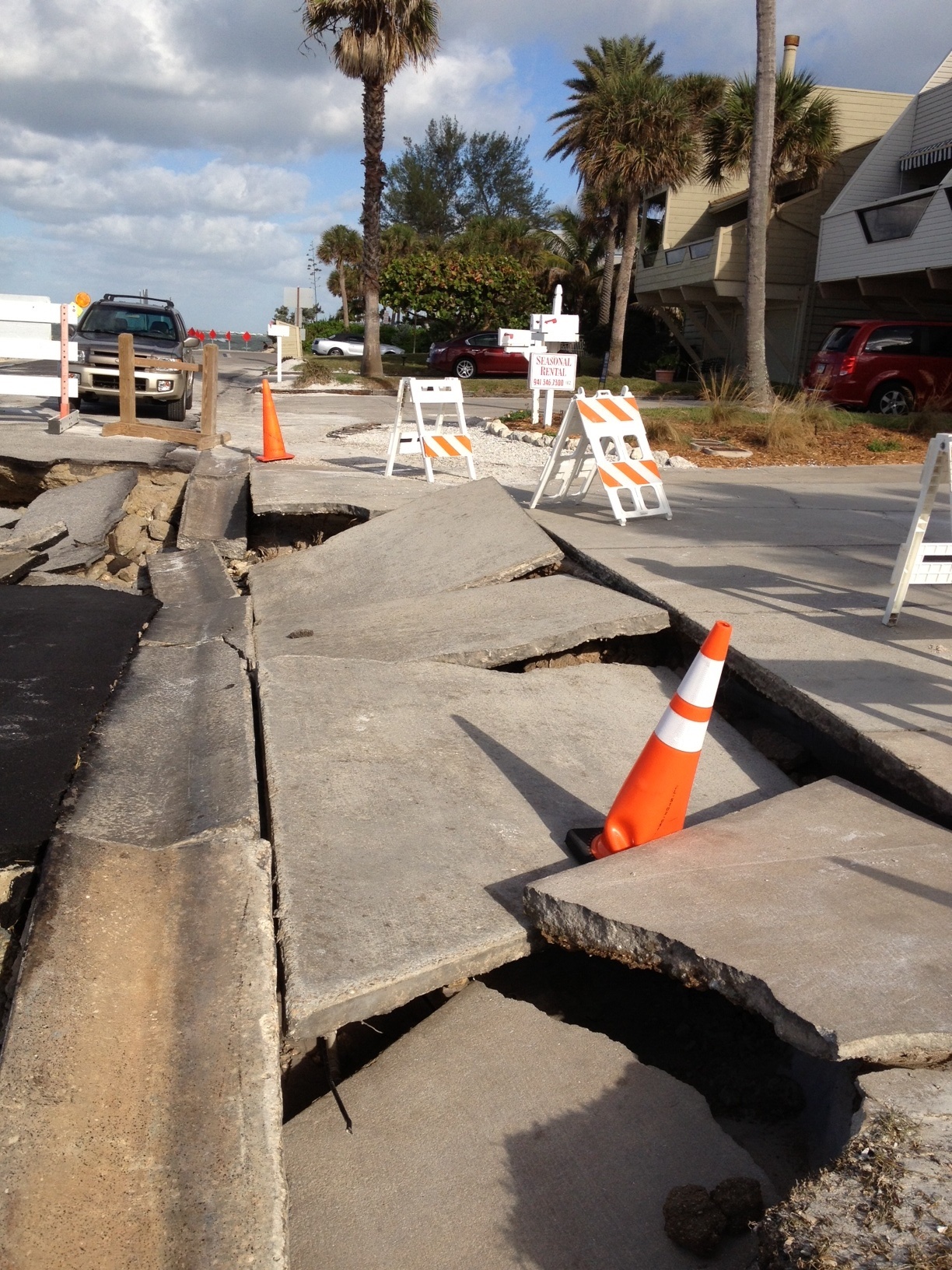 On the morning of May 11, two public hearings have been scheduled back-to-back for the Sarasota County Commission to consider matters pertaining to a 360-foot section of North Beach Road on Siesta Key that has been impassable to traffic for years.

During the first hearing, the board will consider whether the county should abandon that portion of the road; the second hearing will involve a petition for a Coastal Setback Variance for new construction between that part of the road and Avenida Veneccia.

North Beach Road has deteriorated significantly over the years as a result of persistent storm damage, including problems precipitated by the passage of “Superstorm Sandy” in 2012. A group of people who own property along the 360-foot segment at the heart of the May 11 hearing submitted an application last year, petitioning the county to give up all rights to that part of Beach Road, county documents show.

Additionally, one couple among the three sets of petitioners wants to tear down four structures with a total of 12 dwelling units along the same part of North Beach Road. Those structures were built in the 1930s and the 1940s, county property records show. The couple — Dennis and Wendy Madden — plans to replace them with a single new building that would be further landward, their road abandonment application says, noting that the “proposed vacation of the deteriorated segment of Beach Road is possible only if the … lots are redeveloped consistent with [the couple’s] Coastal Setback Variance Application, [because several of the units] are accessible only from Beach Road.”

Matt Osterhoudt, senior manager in the county’s Planning and Development Services Department, told SNL on April 14 that the public hearing on the road abandonment is scheduled immediately ahead of the hearing on the Coastal Setback Variance petition. However, he said, “Sometimes [the commissioners] will open both hearings at the same time because they’re interconnected.” That decision is up to the board chair, he added.

The petitioners seeking the road abandonment also have offered to pursue the necessary legal means to ensure that unimproved lots they own west of Beach Road would be restricted from future development if the County Commission agrees to the abandonment.The commission voted unanimously on April 12 to proceed next month ( May ) with the public hearing on the road matter. Both public hearings will be held at the County Administration at 1660 Ringling Blvd. in downtown Sarasota.

The matter at hand

The petition for the “Vacation, Abandonment, Closure and Discontinuance of a Road or Portion Thereof” was filed

with the county by attorney Charles D. Bailey III of the Williams Parker firm in Sarasota on behalf of three couples: J. Edward Ramsey and Christy S. Ramsey of Bristol, IN; Dennis W. Madden and Wendy W. Madden of Ada, MI; and William Caflisch and Sheila S. Caflisch of Sarasota. The application explains that the petitioners own contiguous lots abutting the east and west sides of Beach Road north of Columbus Boulevard that lie within the Mira Mar Beach Subdivision.

The petitioners signed the application in April and May of 2015.

They are asking the county to vacate and close the portion of the Beach Road right of way platted as Avenida Puesta del Sol, “which bisects their lots and extends from Beach Road’s intersection with Columbus Boulevard northward approximately 360 feet,” according to the application.

The document’s narrative points out that that section is “impassable by vehicles due to the deterioration of the roadway conditions over the last several years and the lack of road maintenance and repair by the County.”

It adds that the petitioners’ lots on the east side of Beach Road “front directly on and have driveway connections to Beach Road. However, there presently is no practical access to these parcels” because of the road’s “continued state of disrepair.”

The narrative continues, “Fortunately, each of the Petitioners also own adjacent lots which abut either Avenida Veneccia or Columbus Boulevard, providing legal access to their respective Beach Road lots.”

Additionally, the narrative says, they own unimproved platted lots west of Beach road, “which lie within the sandy beach and Gulf of Mexico.”

That portion of Beach Road at the focus of the petition was washed out regularly during storm events over the past several decades, the narrative explains. Among those were the 1982 “No Name Storm,” it points out.

In June 2012, Tropical Storm Debby contributed to significant erosion of the road, county staff noted at the time.

The narrative says the petitioners propose that the road vacation “be conditioned upon the creation of public easements” that would allow for pedestrian access, utilities and drainage, “and, significantly, to their extinguishing development rights on the lots waterward of Beach Road to ensure they remain undeveloped in perpetuity [the emphasis is in the document].”

The narrative also points out that the “proposed vacation would not in any way impede the public’s pedestrian access to the beach or the Gulf of Mexico” and that county public beach accesses are located both north and south of that segment of Beach Road.

A plan for new development

The narrative further explains that the Maddens’ lots contain 12 dwelling units that are not in compliance with the current Florida Building Code or regulations of the Federal Emergency Management Agency (FEMA), the Florida Department of Environmental Protection (FDEP) or the county’s Zoning Code.

The Maddens intend to redevelop those lots by building one structure with six fully conforming units, the document says. It would be located further landward than the concurrent structures and accessed exclusively from Avenida Veneccia.

According to records of the Sarasota County Property Appraiser’s Office, a 12,283-square-foot parcel at 89 Beach Road has two buildings on it that have a total of seven units. Erected in 1935 and 1940, they were sold to Wendy Madden in August 2001 for $420,000, county property records say. The Maddens also own a 10,724-square-foot parcel at 84 Avenida Veneccia, where structures containing five apartments stand. Those buildings date to 1941 and 1945, the records show. The Maddens purchased them in April 2003 for $545,000.

During the July 2012 Siesta Key Association meeting, Diane Erne — then a resident of a condominium complex on Avenida Messina — talked bout the “huge holes” that had opened up on North Beach Road near Access 3 as a result of Tropical Storm Debby’s lingering in the Gulf of Mexico for several days.

Then-County Commissioner Nora Patterson told her she had asked staff to take a look at the situation, adding, “I got some frantic calls [about it].”

After Hurricane Sandy swept by the coast in October 2012, the county’s then-chief engineer, James K. Harriott Jr., reported that it would take about four to six weeks before permanent repairs could be made to a 150-foot-long section of North Beach Road, at an estimated cost of about $200,000.

The three couples’ application for the road abandonment says the county spent more than $230,000 “performing emergency repairs to the roadway segment immediately north of this portion of Beach Road” in November 2012, which were necessary “to provide access to the homes north of the Petitioners’ lots.”

However, the segment of the road that is the focus of the petition “remains unusable by and unsafe for vehicular traffic,” the application points out.

The petitioners’ application says that in 2013, the county obtained an independent coastal engineering study that evaluated various options for the potential repair of the road. “Ultimately,” the application adds, “the County opted to take no action, monitor the conditions for change, and maintain Beach Road ‘as is,’ in its current, unusable condition.”