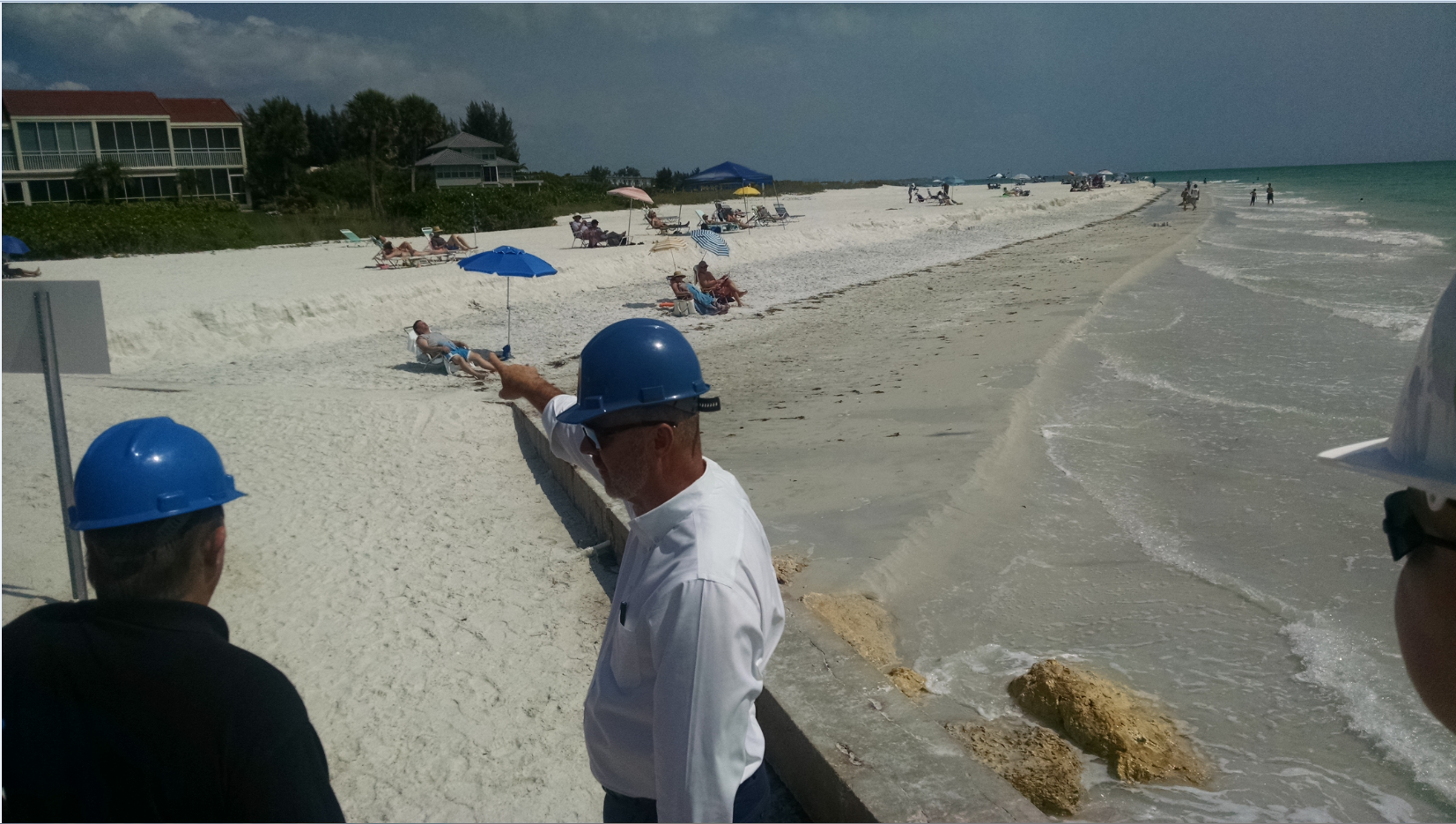 A retired sand mine manager and Siesta advocate think so.
By Roger Drouin

McCalla, former manager of SMR Aggregates Inc., believes the U.S. Army Corps of Engineers and the city of Sarasota have been looking in all the wrong places for sand sources for the $19 million Lido Key Hurricane and Storm Damage Reduction Project.

Instead of the controversial plan to dredge sand from Big Pass, those who are heading up the project should be looking inland for sand sources, McCalla believes. Sand from mines — such as SMR Aggregates in east Sarasota County or other sand and gravel mines in the state — would be less costly and could be a reliable source of sand that can be matched to existing beach grains.

“It’s sand that comes from millions of years ago,” McCalla says, “No chemicals are involved. The sand is passed over different grades of screens. It is washed and would be nice and white.”

That’s because mined sand can be refined, through a process using different filtering screens, into different grades — from mason sand to fine, “glass,” quartz sand consistent with the sand found on Siesta’s beaches, McCalla said.

“Why are we getting involved with dredging?” asks McCalla, who believes bringing in mined sand would be less expensive because it bypasses the cost of dredging sand, in which a contractor often charges millions just to mobilize a dredging vessel. Although mined sand itself is fairly inexpensive, the bulk of the cost would be trucking expenses.

There are some drawbacks to this former mine manager’s plan, including heavy truck traffic on roadways, and because mined sand is not typically used for beach projects, it is unknown whether state and federal officials would issue a permit for a mined-sand renourishment.

But Catherine Luckner, beach advocate and vice president of the Siesta Key

Association sees promise in the concept of mined sand.

In a separate effort, Luckner, who does not know McCalla, has been talking about the possibility of using mined sand, instead of sand dredged from the pass, to buffer Lido beach. Luckner began advocating for exploring this option after she learned about white mined sand being used to partially rebuild a stretch of storm-battered shore on north Longboat Key.  The mined sand was used to buffer the beach and provide a foundation below a top layer of dredged sand.

“They didn’t have to dredge first. They had truck loads of sand,” Luckner told Siesta Sand. “They got a permit to shore up the beach [with the mined sand].”

Although the sand trucked in from a mine north of Plant City only provided a base layer, it has Luckner wondering whether a higher quantity of mined sand could be used to fill in eroded Lido Beach.

Some of the mined sand could even be used to establish dunes areas along the beach that would stabilize the shoreline and help protect buildings on Lido — especially after mined sand was used on Longboat.

“Why hasn’t anyone said, ‘We are thinking of doing that for Lido’?” Luckner asks.

An alternative to the dredge?

In written comments submitted to state environment officials, Luckner has raised the possibility of the Army Corps, which is conducting the Lido Beach Renourishment along with the city of Sarasota, using mined sand. “We put it out there as an option,” Luckner said.

“It’s all natural fossils finely ground,” Luckner said. “It is white as can be. It mixes well and seems to fall well [on the beach] because of the grain size.”

Yet perhaps most importantly, using mined sand would avoid the need to dredge sand from the pass “where it is in a good place doing what it is supposed to,” Luckner says.

In the mid 1990s, a senior scientist at Woods Hole Oceanographic Institute and a professor at the University of Virginia found that the impact of dredging the shoal of Big Pass would pose an unacceptable risk to Siesta Key and the downdrift beaches. That study, conducted in 1994, showed that the ebb shoal in Big Pass was the foundation for the stability of sand formation to the south, including Siesta Key.

Luckner says the SKA has been focused on trying to find solutions, and using mined sand is one possible option. “Do they have to dredge that channel? I don’t know. I think there can be a better way,” Luckner told Siesta Sand.

Luckner also wants to know why the Corps hasn’t considered permeable, adjustable groins such as the ones used on the north end of Longboat Key. This type of structure could have less impact on downdrift beaches such as Siesta Beach.

There could be alternatives.

SMR Aggregates, the mining operation in Sarasota County on Lorraine Road, east of the Interstate, would be a good source for beach sand, he says. The operation is mostly unknown to residents; McCalla has called it “Sarasota’s best kept secret.”

Officials at SMR Aggregates did not reply to a call for comments for this article.  “We have these resources at our door step,” McCalla said.

Mined where sand, shell and other aggregates are dug at SMR, and other similar mines, eventually are vacated and make large lakes. Benderson’s rowing park was the former and original mine site of SMR, according to McCalla. In the future, the current Lorraine Road mine will likely become the site of lakeside million dollar homes because of its location, McCalla predicts.

The mine, McCalla believes, can handle the volume of sand needed for a large beach project. Before the housing crash, aggregate from the mine filled at least a thousand large dump trucks a day. “When I worked at the mine, there were hundreds of trucks at five a.m., waiting for the mine to open. We had massive front end loaders and each scoop would hold at least eight to ten tons,” McCalla said. So three scoops would fill the back of a large dump truck.

One complaint of local residents, at the time, was the heavy truck traffic, and depending on how trucks got to the beach, that could be an issue for using mined sand on the beaches. McCalla also has heard there has been a county permitting issue delaying the mine from further operations. That permitting holdup would have to be worked through before the mine could be used as a beach-project sand source.

But the mining operation — which relies on a filtering process that uses screens — is clean, McCalla claims, unlike phosphorous mining. And the finished produced is spotless sand. “It has been cleaned,” the former manager says.