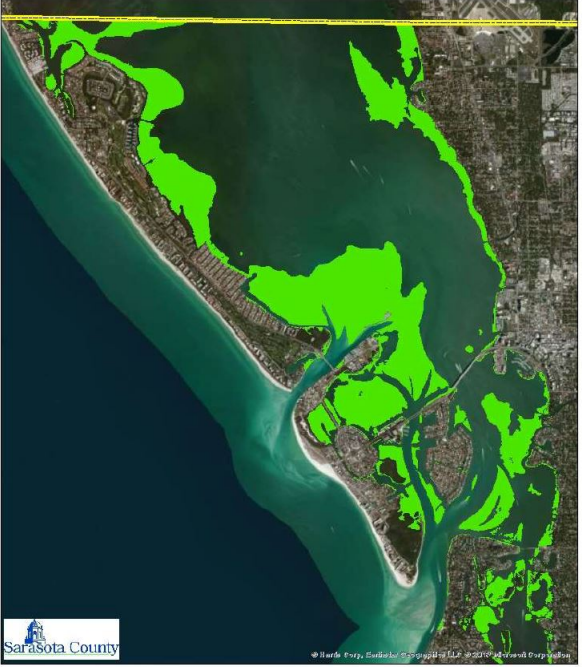 What about the seagrasses?

That is becoming an important question as more details become clear about the U.S. Army Corps of Engineers proposal to dredge Big Pass, as part of the Lido Key Hurricane and Storm Damage Reduction Project.

The joint Army Corps of Engineers and city of Sarasota project to dredge the pass may result in up to 1.7 acres of direct “unavoidable seagrass impacts.” Portions of two beds of sparse shoalgrass—a seagrass able to survive in high salinity—in Big Pass could be impacted by dredging, according to the federal agency.

Although dredging work could threaten up to 1.7 acres of the shoalgrass (halodule wrightii), another three acres could be impacted by “indirect” factors such as turbidity, which the Army Corps plans to “mitigate for up-front.”

According to public emails and information provided to Siesta Sand by an Army Corps ecologist and spokeswoman, the federal agency, which is pushing ahead with a state environmental permit for the project, is researching the best ways to avoid or counter any impacts.

Currently the Army Corps is researching the different mitigation options. Both Siesta Key and environmental advocates, however, say the potential loss of seagrass is just one more reason to be worried about the consequences of the Lido Beach project.

The complex beach renourishment involves the installation of at least two rock groins on Lido’s shoreline and the removal of 1.3 million cubic yards of sand from Big Pass, which has never been dredged before.

The plan to mitigate for seagrass damage was included in the Army Corps’ 2015 Environmental Assessment report. But it was a June email exchange between Hershorin and John Ryan, an environmental manager with Sarasota County Public Utilities Department on the possibility of seagrass impacts that raised a red flag for Peter van Roekens, of Save Our Siesta Sand 2, when it came to his attention.

The Save Our Siesta Sand 2 Chair and other advocates are concerned that trying to transplant a seagrass environment—one that has been recovering recently—is a difficult prospect.

“There is a whole paper that says Florida has not fared well when it comes to success rates of transplanting seagrass,” van Roekens told Siesta Sand. He is referring to a 1998 report issued by NOAA’s Coastal Ocean Program states that based on reports from the Panama City Florida Field Office, the degree of success of permit-related mitigation has been generally poor and in many cases, is unknown. This report indicated that on a national scale, only approximately 10 percent of the planting achieved 100 percent cover within the monitoring period.

Lack of an in-depth review

Local environmental consultant and former Sarasota County Environmental Services Director Rob Patten believes it’s not just one species of seagrass that could be damaged by dredging in the pass. Strands of turtle grass (thalassia testudinum) might also be impacted. “I was out walking three weeks ago, and there is turtle grass out there,” Patten said. “That is a thicker grass, and that has an extremely low survival rate when transplanted.”

In addition, Patten worries that vibrant seagrass habitats—including multiple-species seagrass ecosystems thriving off the channel margins of Ted Sperling Park—could be killed by the so-called “indirect” impacts when silt is kicked up during dredging. While these grassbeds may not be in the dredge footprint, they most likely would experience loss due to indirect impacts of increased current flow and sediment erosion due to the proximity to the dredged area, Patten said.

“As an environmental professional, this project is frightening,” Patten said about the overall Lido project.

At heart of the issue is the lack of an in-depth environmental review for such a large undertaking planned over a 50-year project life, said Patten.

Patten, along with other environmental advocates, has called for the Army Corps to conduct an Environmental Impact Statement (EIS), but the federal agency has maintained that a less-comprehensive Environmental Assessment (EA) is all that is required. The question of seagrass impacts is one issue that should be answered by scientists during the EIS review process, Patten contends.

“These are the kinds of scientific and environmental questions that should not be debated in the press,” Patten said. “We deserve scientific review by local scientists and other qualified people. And an Environmental Impact Statement is the only true way to make these assessments.”

The Army Corps has declined requests to create an Environmental Impact Statement (EIS) analysis for their proposed dredging of Big Pass, instead relying on an outdated 2004 Environmental Assessment, Patten said.

Patten also notes that seagrass targets have also been established by the Sarasota Bay Estuary Program (SBEP), which lists the protection of seagrasses as one of its top management goals.

The Army Corps is looking into different mitigation sites, a spokeswoman with the agency told Siesta Sand. The “emerald necklace” islands in Sarasota Bay is one possible mitigation site. The islands are a string of spoil islands created during the dredging of the Intracoastal Waterway, and a project is in the works to restore the islands’ upland, estuarine, and seagrass habitats.

Other options include restoring altered seagrass habitats that were previously vibrant before dredging work associated with residential development.

“We are exploring these ideas in the event that we require mitigation, as completing the mitigation during the initial construction provides the most ecological benefit and is the most cost-effective,” Hershorin wrote in an email response to Siesta Sand.

In a June 9 email from Hershorin to Ryan, Hershorin stated the Army Corps is seeking feedback from the county on different possibilities for mitigation projects.

“We are currently conducting a NEPA evaluation of the Lido Key Hurricane and Storm Damage Reduction Project, and we may have between 2-5 acres [total] of unavoidable seagrass impacts.”

The ecologist continues, “To mitigate for these impacts, we would like to both relocate the impacted seagrasses and conduct additional mitigation.”

Hershorin continues to write in her June 9 email: “We were recently contacted by someone interested in a former feasibility study USACE conducted in the early 2000s to restore several spoil islands created during the dredging of the GIWW.  Some of the concepts developed during that study may also provide opportunities for creating seagrass habitat, but I was also interested in other ideas the County might have for the islands that might be suitable for use as mitigation.

In an email response Ryan, the county environmental manager, provides some input about potential waterways where mitigation projects could be undertaken. Ryan also asks about the seagrass areas that will be impacted by the Corps’ work: “I’m surprised 2-5 acres of seagrass will be affected by the project. Is it in the pass? I don’t think we have any seagrass mapped in the Gulf.”

Seagrass habits have been rebounded in Sarasota County. Ryan attributes seagrass recovery locally to nearly eliminating surface water discharges of treated wastewater and some important stormwater improvements in the county.

Pushing ahead with a permit

For van Roekens, the seagrass impact is yet another example of the high-stakes risks of the Lido beach project and associated Big Pass dredging.

“There are so many potential impacts,” van Roekens said. “The major concern about this project is there is nothing they [Army Corps] can point to with evidence and say ‘it won’t be a problem.’”

The U.S. Army Corps of Engineers officials say they can’t find compatible sand that matches Lido Beach—except in Big Pass—and so the Corps is pushing ahead with permitting for its $19 million plan to buffer the beach. The Lido project is a joint effort between the Corps and the city of Sarasota.

A similar effort to dredge Big Pass for two beach projects in the 90s was stymied by vocal opposition and eventually a lawsuit. Advocates, however, involved in the battle to stop the dredging then and elected officials at the time recall just how close these projects came to fruition.

This time around, van Roekens is focused on stopping the current effort to dredge the pass.

“We are going to fight this in court,” van Roekens said.

As the Army Corps and city of Sarasota forge ahead with their joint coastal permit for the project, Sarasota County is also proceeding with an independent analysis of several aspects of the Corps’ modeling and the overall project.

In June, Sarasota County Commissioners signed a contract for $49,620.00 with Atkins Engineering to review the COE project.

Laird Wreford, coastal initiatives manager with Sarasota County, previously told Siesta Sand that he expects the firm to take about two to three months to conclude the review.