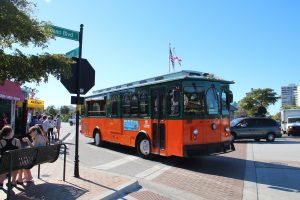 “It’s a big deal,” was the common refrain as representatives of the Siesta Key Chamber of Commerce, Sarasota County, RideRight Transit and members of the public gathered in front of an open-air trolley on the morning of March 20 in Siesta Village.

Sarasota County Area Transit (SCAT) — with the help of County Commissioners Alan Maio and Mark Moran — officially launched the long-awaited service, which will transport riders between Turtle Beach and Siesta Village. Dubbed “Siesta Key Breeze,” because a Sarasota firm owns the rights to “Siesta Trolley,” the free circulator will run as a pilot program for six months, SCAT Director Rocky Burke pointed out. “We want it to be successful.”

“It’s only taken seven years,” Wendall Jacobsen, general manager of Beach Bazaar and the last president of the Siesta Key Village Association (SKVA), joked with SNL about the Breeze after the ceremony.

Over the weekend, Jacobsen said, Beach Bazaar distributed copies of the schedule to visitors. “We probably gave out a thousand [to] a lot of families, a lot of kids — a lot of people interested in it.”

That demand proved itself on March 20, with more than 1,028 passengers riding the Breeze on the first day, Kendra Keiderling, SCAT’s marketing, outreach and customer service manager reported. In an email to Siesta Chamber members, she wrote that the number was “beyond my expectations …”

“Woohoo!!!  Great job everyone!” Ann Frescura, executive director of the Chamber, responded. The Breeze will operate seven days a week from 8 a.m. to midnight, Burke told the audience during the ceremony, and SCAT wants to do all it can to promote the service. The trolley also will run on Memorial Day and Independence Day.

The goal is for the Breeze to circulate every 20 minutes during peak hours (10 a.m. to 6 p.m.) and every 30 minutes during the remaining operating hours, Keiderling said.

SCAT stops where Breeze passengers may embark and disembark will have trolley emblems on them, Keiderling noted, but people also will be able to “flag down” the trolley on Midnight Pass Road, south of the Stickney Point Road intersection. The Breeze will stop at the closest safe place for those riders to board, SCAT staff has said.

Riders will be able to transfer from the trolley to SCAT buses on Routes 11 and 33, Assistant County Administrator Mark Cunningham pointed out during the March 20 ceremony.

Siesta Key Chamber of Commerce Chair Mark Smith had hoped the trolley would be more visible in Siesta Village, he said during a brief interview on March 20. “I’m making my suggestions known,” he added. “It is important that people see it come into the Village.”

The more visitors become aware of the trolley, he pointed out, the greater the demand will be. SNL asked Burke about the fact that the Breeze will make just the single stop in front of Siesta Market before heading onto Ocean Boulevard and then west to Beach Road. He explained the reasoning for that has been “the congestion with the people and the cars [in the Village], so we’ve got to factor in the safety issue first and foremost.” Nonetheless, he stressed, this is a pilot program; therefore, he and his staff are still trying to figure out whether they can comply with the need Smith cited for greater visibility.

During his comments as part of the ceremony, Burke pointed out that SCAT staff worked with the Florida Department of Transportation (FDOT) to make funding for the Breeze possible. Commissioner Maio — another speaker during the event — noted that Burke and his staff “did some very creative things with FDOT to get this trolley here.”

Details about the service

The Breeze will replace SCAT Route 10, which was launched in the summer of 2014 to complement Route 11 in serving Siesta Key. Members of the Siesta Chamber and the Siesta Key Village Association (SKVA) — before the Chamber absorbed the latter at the end of 2016 — complained that SCAT did not advertise Route 10 sufficiently, which was one reason it proved unsuccessful. SKVA members also long had emphasized the need for an open-air circulator because they believed it would be in keeping with the island atmosphere and, therefore, far more attractive to visitors than a regular bus.

Because of “consistently low ridership,” the Feb. 28 county staff memo explained to the county commission, SCAT implemented changes to Route 10 in November 2015. Nonetheless, the memo continued, the bus service still exhibited “poor performance for several reasons.” One of them, the memo reported, was that “the type of vehicle used was not desired by the passengers residing [in] and visiting the area.”

In an interview with SNL after the Feb. 28 bid award, Russell Matthes, a longtime SKVA officer, said of the trolley, “It’s definitely more rider-friendly,” and more inviting to visitors. “We think that alone will stimulate ridership.”

During his March 20 remarks, Maio joked, “My number of emails will be reduced by 20% because this trolley has now started. You have a very active, intense lobbying group here.”

Maio encouraged the Chamber members and other business owners “to get as many people as possible to ride this for six months” to demonstrate to FDOT the need to keep the Breeze rolling after the pilot program ends.

Assistant County Administrator Cunningham pointed out that the trolley “is a one-of-a-kind in Sarasota as of this moment.” And even though it is an open-air vehicle, it does have air conditioning. Burke said. Keiderling planned to be back on the Key that week, “passing out more stickers and giveaways” to promote the service, she wrote in her March 21 email.