Is a Roundabout REALLY Needed?

For architect and Siesta resident Mark Smith, all the traffic on the Key isn’t a bad sign—Siesta is the No. 1 beach, after all. “There are a ton of people out here,” Smith said.

But the cars aren’t lessening on the roadways during peak times of the year, and now the

Florida Department of Transportation is considering options to handle the traffic while trying to improve pedestrian safety at one of the Key’s main intersections.

A roundabout is one of the options for the Midnight Pass Road and Beach Road intersection, and this proposal has many who live and work on the Key wondering what the impacts will be on the major thoroughfare.

“We have many questions,” said Alana Tomasso, Chair of the Siesta Key Chamber of Commerce and General Manager at Midnight Cove.

Tomasso wonders: How will a roundabout impact vehicle traffic—especially during events such as the annual Crystal Classic sand sculpting competition or when everyone leaves the beach during a rainstorm?

Tomasso is not the only one asking questions.

“Let’s assume they decide to do this and build it, how will the roundabout be built and when,” asks Michael Shay, President of the Siesta Key Association (SKA). But his biggest question echoes that of Tomasso: what happens to traffic once a roundabout is built?

“We have enough of a problem right now, especially in season,” Shay said.

What kind of gridlock will result when a line of beachgoers toting coolers cross Beach Road through a roundabout? How would the roundabout impact accessibility to the nearby condominiums Our House at the Beach?

When FDOT first presented the renderings of the roundabout at the Feb. 5 SKA meeting, members also raised many questions. “I’m not saying I am against [the roundabout] or for it,” Shay told Siesta Sand. “But there are still questions that haven’t been answered.”

Brian Bollas, a senior planner for Parsons Brinckerhoff, a consulting firm working for FDOT, says a lot of these questions will be answered at a public workshop held by FDOT March 10. That workshop is scheduled for 5 to 7 p.m. at St. Boniface Episcopal Church, 5615 Midnight Pass Road.

Engineers will be on hand to present details for three options: the roundabout; a modified and signalized right turn lane onto Midnight Pass; and a third “do-nothing” option that leaves the intersection the way it is.

“We will have some preliminary cost information, and highlight some advantages and disadvantages for each option,” Bollas said.

“The goal of the project is to improve safety, “including pedestrian, bicycle, and vehicle safety,” Bollas said.

If either a roundabout or signalized right turn is constructed, the work will take place off-season, and project managers will try to get construction wrapped up as quickly as possible, Bollas said.

A roundabout would be able to handle large volumes of traffic, Bollas said, similar to the roundabout in Clearwater Beach, while increasing pedestrian safety. Statistics show roundabouts lead to fewer and less-serious crashes.

A signalized and modified right turn onto Midnight Pass would allow pedestrians to cross safely when cars are stopped at the light. Currently there is not a signal at the intersection.

Choosing an option
The state has not chosen a final option yet. “We don’t have any preconceived idea,” said Robin Stublen, a spokesman for FDOT. “It is whichever option makes the most sense and is the safest.”

Stublen said the March 10 workshop will be a forum for residents and property owners to ask questions and give comments. “People can give input in writing and verbally at the workshop,” Stublen said. “We pay close attention to what people say.”

Smith, the architect and Siesta resident, knows something has to be done at the intersection.

“I go through that intersection quite a bit,” Smith said. “There is a ‘no man’s land’ on that island where Midnight Pass goes north. It’s crazy right now. It is dangerous [for pedestrians].”

But Smith isn’t convinced a roundabout is the answer.

He believes adding a traffic signal and modifying the right turn lane to Midnight Pass going north will make it easier for pedestrians to “get from Point A to Point B a lot safer,” while functioning to facilitate traffic flow. The current yield lane onto Midnight Pass was probably a left-over from a sleepier time on the Key when there was less much traffic.

“I grew up in Sarasota and that turn has been like that since I can remember,” Smith said.

For Smith, a roundabout will have unintended consequences on traffic. “The traffic is the worst three or four months a year, and that’s when we want to keep tourists happy.” Tourists getting stuck in the beach public parking lot won’t be happy, Smith adds.

“The existing light [at the intersection] does give a little pause so folks can get out of the parking lot,” Smith said. A free-flowing roundabout might eliminate such a pause in traffic. Smith also worries beachgoers might try walking directly through a roundabout, instead of using the crosswalks. “I’ve been around the beach long enough to know people walk all over the place,” Smith said.

Smith, however, is actually a fan of roundabouts—just not at Beach Road and Midnight Pass. “They are great in certain locations,” he said. “The roundabouts downtown are great.”

After the March 10 workshop, FDOT officials working with engineering consultants will decide the “preferred project” and make a formal presentation at a public hearing, Stublen said.

Below is the Collision Diagram & Summary of all the accidents that have occurred going back to 2006. Click on each image to view them on a larger scale. 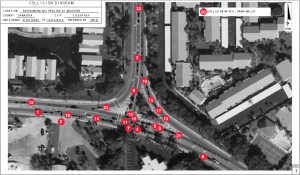 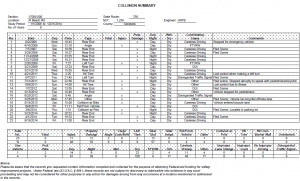