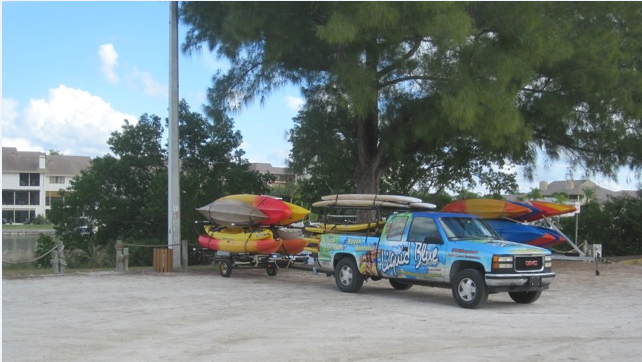 Kayaking and stand up paddle boarding have become increasingly popular in recent years. So much so that Sarasota County introduced new rules regulating commercial vendors in January of 2014 to address complaints of over commercialization and lack of access for the public at Ted Sperling Park on Lido Key, home to the area’s most popular launch point, the trailhead for the paddling trail that weaves its way through the mangrove tunnels that hug the shore of South Lido Key on the bay side.

Now those same rules are coming to Turtle Beach, surprising some on Siesta who say they didn’t realize decisions made in late 2013 concerning problems on Lido would some day apply to Siesta as well. Originally set to take effect on January 1st, in a late breaking development the county on December 17th indicated the rollout will be “postponed until mid-year 2015.”

“Based on feedback received and questions that arose during the public meetings (in early December), we determined that delaying this program would be beneficial to all.”

In an earlier interview with Siesta Sand, Wisner had explained why the rules planned for Siesta were originally introduced at Ted Sperling Park.

“People were complaining that the park looked more like a retail store than a park, with all the kayaks and vendor trailers lined up” she said.

Those vendors compete for what has become big business locally. According to Park Ranger Pete Garcia, there were over 49,000 launches of non-motorized watercraft at Ted Sperling Park last year. 32,000 of those were commercial rentals, the balance private citizens launching their own craft. Exact numbers aren’t available for Turtle Beach, but Garcia agrees with estimates putting the number at about one/third the number on Lido.

Figuring an average rate of $45 per rental, that adds up to almost $1.5 million in economic activity annually.

That points to real progress in the county’s stated goal of bolstering eco-tourism in the area. But on the down side come worries that a diminished park experience may ultimately harm Sarasota’s reputation as a tourist friendly destination.

As Lance Harden of Siesta Key Bike & Kayak told Siesta Sand recently, “I’ve lived here all my life. No one wants to see this place turn into the boardwalk on Atlantic City.”

Beyond issues of commercialization there were also complaints of rental companies soliciting customers at the park, a violation of park department policy.

In one well-publicized incident over the Labor Day weekend in 2009 David Wells, owner of Almost Heaven Kayak Adventures was charged with soliciting business on public property, a second-degree misdemeanor carrying a possible fine of up to $500 and up to 60 days in jail. Wells had accepted $45 from an undercover Sheriff’s deputy dressed in Bermuda shorts and a t-shirt posing as a tourist looking for a kayak rental. The sting took place within clear view of “No Soliciting” signs the county had posted at Ted Sperling Park.

According to reports in the Sarasota Herald Tribune, some in the business community thought the charges against Wells were a waste of Sheriff Department resources, at odds with the county’s stance on boosting ecotourism.

Sheriff Knight responded by pointing out that the no solicitation laws were written in such a way that his officers were unable to simply fine offenders; instead, the statute mandated misdemeanor charges.

The new rules that went into effect in January 2014 mandate that all vendors at Ted Sperling Park – referred to by the county as “Commercial Recreation Tour Operators” or CRTOs – purchase “medallions” at a price of $500 apiece annually for each “vessel” (kayak, canoe, paddleboard) available for rental. Each vendor is required to provide a $1 million certificate of liability insurance and proof of workers compensation coverage, naming Sarasota County as an additional insured. Additionally, they are required to review a copy of the rules and regulations governing their use of the park, review safety and environmental briefings and provide the county with a list of all employees acting on their behalf.

154 permits were sold to 11 participating vendors, generating $77,000 in medallion fees for the program.

In return, licensed vendors are now able to accept payment on park property, though they are still not allowed to solicit business on the premises. “They can accept business from a park visitor approaching them, asking to rent a watercraft,” added Wisner.

Signs are limited to those affixed to their vehicles, with no kiosks or sandwich board type signs allowed.

To settle disputes between vendors and enforce parking issues and other rules, a full-time park ranger position was created to monitor the park.

That ranger, Pete Garcia, has by most accounts done a good job keeping the peace at Ted Sperling since the program’s rollout.

“He was a contract employee working at the campsite on Siesta Key, but was put on full time when the program was launched,” said Wisner. His duties continue to include some work at the campground so some of his salary represents an expense the county would have had even without the adoption of the new program.

On Siesta, some longstanding businesses can’t understand why the Lido rules are coming to Turtle Beach.

Among those are Mike and Sheila Lewis, who operate Siesta Key Sports and Rentals located at 6551 Midnight Pass Road. They have rented Kayaks at Turtle Beach for years and are one of the closest brick and mortar business to the park.

“Turtle Beach is nowhere near the problem Lido was,” said Sheila Lewis in response to queries from

Siesta Sands on the issue. “There have been some problems with the appearance of companies operating out of the back of a truck. The County says they have had complaints but did not quantify them. We believe the situation could be controlled via compliance with existing laws such as being a registered business paying sales tax and not conducting business on County property.”

Lewis went on to say the $500 “fee” is not really a fee at all, but rather a tax and that traditional brick and mortar businesses already pay a variety of taxes that many of the other rental companies don’t.

Aledia Tush of CB’s Saltwater Outfitters on Stickney Point Road on Siesta and new chair of the Siesta Key Chamber of Commerce agrees.

“I just think that when people have a business storefront they are working from, paying rent and paying sales taxes, or real estate taxes if they own the property, then that is different from those who don’t have that storefront or don’t have to pay for an occupational license. I just don’t think it’s fair that store owners should be penalized.”

Asked if she had been contacted about the new rules coming to Siesta, Tush replied, “I was personally unaware that it was coming. I hear there were signs posted down there (at Turtle Beach), but I was never contacted personally.”

When Siesta Sand asked Wisner about the number of complaints the county has received that led to the program being extended to Turtle Beach she was unable to give an exact number but did indicate it was more than a dozen but perhaps less than a hundred over several years.

Al Hurxthal, a long time area kayak seller and tour operator with Economy Bait and Tackle on South Tamiami Trail views the matter philosophically. “We’re going to be buying medallions,” he said, adding that the expense will be worth it if improves the experience for visitors at Turtle Beach.

“Looking at it from the public perspective, which is how I think it should be viewed, I think it’s going to make for an enhanced user experience for the public,” he said.

As for the cost to implement the program on Siesta, when asked if an additional ranger would be hired to monitor compliance at Turtle Beach, Wisner replied that there are no such plans at this point, adding that Garcia will assume the new monitoring responsibilities, adding them to his current duties at Ted Sperling and the county campground on Siesta.

In addition to the medallion requirement, all non-motorized launches – both commercial and private – are slated to move to the north end of the Turtle Beach lagoon, leaving the gulf side for motorized launches only.

In an ironic twist, the success of the county’s program to tame the circus-like atmosphere at Ted Sperling likely assured that the medallion program and associated rules would be proposed for Siesta Key.

“The pressure on Turtle Beach has certainly increased because of the medallion program at Sperling,” said Hurxthal. “A number of the vendors that didn’t want to pay the $500 per medallion per year moved to Siesta and that’s had an impact there. More traffic. More commercialization.”

So despite having less kayak and paddleboard launchings overall, less congestion and fewer disputes among vendors than Lido over the years, on August 24th, the county commission voted to “expand” the program “as needed” and the need identified focused on the southern tip of Siesta.

To some observers the decision is but the latest example of a “one size fits all” approach by county government that fails to adequately account for the unique circumstances and qualities of life on Siesta Key, which though separated by only the distance across Big Pass is a world apart from Lido.

As one Siesta based vendor who didn’t want his name used quipped with a shrug of the shoulders: “The county’s going to do what the county wants to do…”