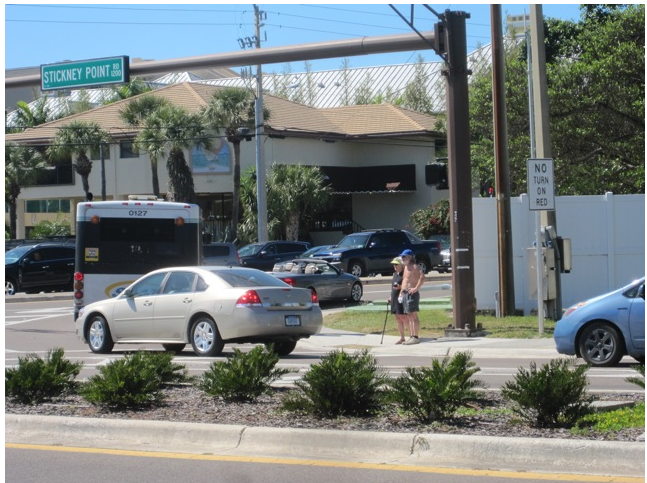 nothing else, the Florida Department of Transportation (FDOT) takes complaints from the public seriously.

Hopefully, by the time you read this, the third plan in as many months should be in place to address pedestrian safety issues at the busy intersection. The latest changes will attempt to lessen the severity of traffic backups – sometimes stretching all the way to the mainland – that were exacerbated in recent weeks when signs went up prohibiting turns on red in all instances for westbound traffic approaching the Key from the mainland, not just when pedestrians are present, which had been the case previously.

The signs restricting the turns went up in mid-February in response to complaints about drivers failing to yield the right-of-way under a red signal to pedestrians attempting to cross Midnight Pass or Stickney Point.

“Our traffic operations office received complaints about drivers making the turns even when pedestrians were trying to cross,” said FDOT’s Lauren Hatchell, a public information officer with the agency in a recent phone interview. “Drivers tend to look left to judge the oncoming traffic and forget to look right again for pedestrians before they start turning,” she continued.

But the move prompted more complaints – this time from frustrated drivers – as traffic snarls caused by the additional cars now unable to turn off Stickney Point during each traffic light cycle stacked up even more traffic on the already overburdened roadway.

Cindi Ferdinand works behind the bar at the nearby Captain Curt’s Crab and Oyster Bar and crosses the Stickney Point Bridge most mornings around 10:00 AM prior to the start of her shift at the popular restaurant and bar; as a result she gets a first-hand look at the traffic trying to make its way onto the Key each day. “If it’s a nice day like we usually get this time of year, the traffic gets really bad. I’ve seen it blocking traffic all the way back on Tamiami a couple of times in the last few weeks” she said one afternoon recently. “It gets bad after lunch too,” around 1:00 or 2:00,” she continued,  “…when the local kids start heading over.”

How many complaints did FDOT receive, first from pedestrians and then later from drivers after the initial change? Hatchell couldn’t say for sure, but added that the department takes even a single complaint seriously.

“The field office will send someone out to investigate a complaint. In the first case they could see a problem. The thought was that adding the sign (prohibiting all turns on red) would work in that location,” she said.

Soon after the new signs went up the complaints started rolling in from drivers; so FDOT sent workers out again to monitor the impact of the February change and noted the new problem of even longer delays for traffic trying to get onto the key and increased instances of vehicles backing up toward the mainland.

“Their (FDOT’s) major priority is to keep traffic moving on the major arteries, like US.41” noted Chief Sarasota County Engineer James Harriott Jr. in a recent phone interview. “When you get back-ups onto Tamiami or US-301, they usually react pretty quickly.”

That was the case here.

The new plan (which was not yet in place as we went to press) will replace the static, printed sign that reads “No Turns on Red” with an electronic one above the intersection that responds to data from the crosswalk control devices at each corner. “When pedestrians are attempting to cross, the sign will display the ‘No Turn on Red’ message,” said Hatchell. “But when there are no pedestrians present, the sign will display a message indicating that drivers can in fact turn on red.”

The electronic signs are fairly new to this area. When asked where else in the county they have been placed, Harriott had to think for a moment before finally pointing to the exit ramp of I-75 that merges onto Fruitville Road westbound. Sure enough, the signs in that location were working as advertised on a recent ride through that intersection.

The King Solomon like decision of splitting the difference… some turns on red instead of the previous two alternatives of always or never – might still represent a net increase of traffic on Stickney Point over what was in place prior to the February change, but it should reduce traffic somewhat over the most recent outright prohibition of all turns.

But stay tuned. If problems persist and more complaints come to FDOTs attention, we’re likely to see more changes down the road.

But it’s important to note that as county engineer Harriott points out, more than 20,000 vehicles on average use the stretch of Stickney Point road between US 41 and Midnight Pass Road on a daily basis. And all that traffic is being funneled from a major thoroughfare to a two line road, “It’s a real balancing act trying to get things right…” he said

One requiring the Wisdom of Solomon for traffic engineers. And the patience of Job for drivers.