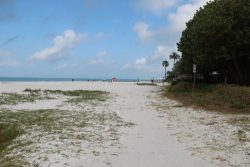 In an Oct. 2 order, Mercurio agreed with the assertions Assistant County Attorney David Pearce made both in a June 2 motion for partial summary judgment in the case and in a Sept. 27 hearing. Mercurio found that Cosentino was wrong to argue that the county did not meet the statutory deadline for publishing the notice of the board’s May 11, 2016 road vacation vote. The judge also agreed that the County Code does not require disclosure of all owners of property involved in a petition for a Coastal Setback Variance.

With Mercurio having granted partial summary judgment in mid-April on a motion filed by intervenors Dennis and Wendy Madden, few issues remain to be considered in Cosentino’s second amended complaint, filed in February. In separate motions on Aug. 18, the Maddens — who were granted status as intervenors in the case — asked the court to dismiss most of the remainder of Cosentino’s suit.

Reached by SNL on Oct. 4, Cosentino said he had not seen the judge’s ruling on the county’s motion for partial summary judgment. However, he continued, “In light of the [April] ruling, I am not surprised and look forward to prevailing at the appellate court level.”

From the outset of the Sept. 27 hearing, Mercurio did ask numerous questions about the county’s assertion that the resolution vacating the North Beach Road segment was advertised in a timely fashion, as required by state law.

“Why is it that the adoption is not May 11, 2016, as the plaintiffs suggest?” he asked Assistant County Attorney Pearce.

“A resolution is not effective until it’s been rendered and filed with the Clerk of Court,” Pearce explained. Because the chair of the County Commission is present at a board meeting, Pearce added, the chair goes ahead and signs a document affirming approval of a resolution. That is just the normal process, Pearce indicated. Still, that resolution must be filed with the Clerk of the Circuit Court and County Comptroller, Pearce continued, before it becomes an official document.

In this case, on May 11, 2016, the County Commission directed staff to create an additional 5-foot-wide perpendicular easement across private property seaward of the vacated road segment, to ensure public access would continue from the road to the Gulf of Mexico, Pearce told the judge. The three sets of property owners who had petitioned for the road vacation agreed to that request of Commissioner Charles Hines during the hearing.

Staff “had to go back to the Maddens’ original surveyor,” Pearce told the judge, and then a legal description of the easement area had to be drawn up. (Dennis and Wendy Madden were among the petitioners.)

The survey was completed on June 9, 2016, Pearce said; the legal description was finished on June 10, 2016, and then, on June 27, the resolution was ready to be rendered and filed with the Clerk of Court’s Office. Five days later — on July 2, 2016 — it was published in the Sarasota Herald-Tribune, Pearce pointed out.

Cosentino’s attorney, Ralf Brookes of Cape Coral, argued that county regulations make no distinction between “adoption” and “rendering,” so the signature of then-Commission Chair Alan Maio on the May 11, 2016 document constituted adoption of the resolution. Moreover, Brookes said, Deputy Clerk of the Circuit Court Andrea Greer signed the resolution on behalf of Clerk of Court Karen Rushing. “That’s the first time this document was rendered.”

By law, therefore, the resolution should have been published within 30 days of May 11, Brookes pointed out.

Further, “They re-rendered it without having a public hearing,” Brookes said. “The public wasn’t afforded the opportunity to discuss everything … [The amended resolution] was prepared after the fact.”

Who determined what the County Commission asked for in regard to that 5-foot-wide easement?, Mercurio asked Pearce.

The board specifically requested the 5-foot-wide easement perpendicular to North Beach Road, Pearce explained, and it provided a sketch for staff to use for the final version of the resolution. “It’s just that simple.”

The other issue at the heart of the hearing was rooted in Section 3.9 of the Sarasota County Charter. That says, “All persons or entities applying for rezoning, special exceptions, or variances, shall disclose the true ownership interests in any property sought to be rezoned and shall further disclose the true parties in interest in any corporation, trust, partnership, limited partnership or any legal entity of any type in their zoning application,” Pearce pointed out in the motion for partial summary judgment.

The Charter also calls for all applications related to zoning “or any other form of land use change” to be presented on official county forms.

Pearce argued that section of the Charter does not apply to Coastal Setback Variances. The latter are not even in the same section of the County Code as the zoning regulations, Pearce pointed out.

Yet, Brookes told the judge that the Charter “clearly uses the word ‘variances.’ This is a Gulf Beach Setback variance” in the May 11, 2016 case, Brookes pointed out.

The disclosure of all the property ownership linked to this Coastal Setback Variance petition, Brookes said, is “important because it helps with transparency. … Are [the applicants] political contributors? Do they have political influence?”

When the Charter was written, Brookes said, the goal was to make certain “the real people behind [an] application would be known.”