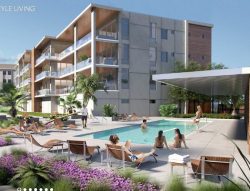 In mid-March, a broker associate with Premier Sotheby’s International Realty in Sarasota reported that if all went well, the first new condominium development on Siesta Key since 2009 would be underway in June or July.

Yet, the Ocean Boulevard site of the project remains vacant.  Fronting Big Sarasota Pass, the property is just north of Siesta Village. Fabric lining a chain-link fence, to obscure the site from view, was ripped away by Hurricane Irma in early September, once again affording passersby an opportunity to fully appreciate the vista encompassing the pass, the Gulf and Lido Key.

According to county records, the owner of the property, CG Oceane LLC, paid $4,785,000 for the parcels, when the closing was held on Jan. 18.

What happened to the plans for Oceane?

On Aug. 29, Sarasota County Attorney Stephen DeMarsh brought up the project during his report to the County Commission. An Aug. 22 memo he had provided to the board explained that CG Oceane, which owns the three parcels comprising the condominium site — 4720, 4732 and 4740 Ocean Blvd. — had filed an administrative appeal of county “Building Official Kathleen Croteau’s written interpretation that certain proposed improvements to the [construction] project are not permitted under the County’s Floodprone Areas Ordinance.”

To that end, DeMarsh continued in the memo, a hearing had been scheduled for Sept. 28 before the Building Code Board of Adjustment and Appeals. The Office of the County Attorney represents that board in its proceedings, he added. “Ordinarily, the Building Official does not require or request representation from our office at these hearings,” DeMarsh pointed out. “In the past, however, the [County Commission] has authorized special counsel to represent staff, such as the Zoning Administrator, for hearings that are particularly complex.”

DeMarsh told the commissioners on Aug. 29 that he was seeking their authorization to hire outside counsel for Croteau in this case. Commissioner Charles Hines made the motion to approve the request, and Commissioner Nancy Detert seconded it. The motion passed unanimously.

As it turned out, the county did not have to hire outside counsel, after all. Michael J. Furen, the attorney with the Sarasota firm of Icard Merrill, notified the county that CG Oceane was dropping the appeal.

The county’s Calendar of Events shows that the hearing was scheduled from 1:30 to 5 p.m. on Sept. 28 at the Sarasota County Operations Center, which is known as the BOB building, at 1001 Sarasota Center Blvd.

A notice at the bottom of the event page says, “Meeting cancelled by request of appellant.”

Almost exactly two months later — on Nov. 14 — a different Icard Merrill attorney, William Merrill III, appeared before the County Commission on behalf of CG Oceane to request that an extra 2 feet in height be approved for the approximately 350-foot seawall on the Oceane condominium site. Just that much more seawall, Merrill explained, would enable buyers of the units to cut their flood insurance bills by 50% or more.

The project team had been working with the Federal Emergency Management Agency (FEMA) on flood zone issues at the site, Merrill said. The $24-million condominium project “has been delayed specifically because of this one issue,” he pointed out.

The commissioners unanimously granted the request.

The publication also was unable to get any comment from Furen after CG Oceane dropped its appeal in September.

When SNL asked to speak with Building Official Croteau about the appeal, she also did not respond. Her assistant stated that Croteau would prefer to have no comment on the Oceane project.

In early December, SNL made one more attempt, asking Merrill for assistance in determining whether CG Oceane had received the final permits it needed for the seawall project. He replied in an email that he would contact his client, as he was not involved in that part of the process. SNL heard nothing more.

A variety of requests

In a June 16 letter to Furen, Building Official Croteau explained that she and her staff had reviewed the sections of the Sarasota County Code of Ordinances pertaining to standards for construction “within a FEMA velocity flood zone.” She was responding to a request, she continued, for a determination and an interpretation “to assist with the design of a multi-family structure to assure compliance with [the] Sarasota County Flood Prone Area Ordinance …”

Among the questions to which Croteau replied was one regarding whether breakaway walls, louvered walls and louvered garage doors located within the footprint of the building below the Base Flood Elevation would be permitted.

Because the structure as proposed is located within a FEMA Velocity “V” flood zone, Croteau wrote, the minimum elevation would be 16 feet aboveground “for the bottom of the lowest horizontal element of the structure perpendicular to the direction of wave approach” and 15 feet aboveground “parallel to the direction of wave approach …”

Croteau added that she did have the authority to permit up to one breakaway wall enclosure for a multi-unit building, as long as it did not exceed 20% of the footprint of the structure. Based on the proposed footprint of the Oceane complex, she continued, a single breakaway enclosure of 2,095 square feet would be allowed. “All other areas outside of this enclosure shall be of open wood lattice or insect screening,” she wrote.

Earlier this month, fabric once again covered the chain-link fencing at the Oceane site. After the wind rips it away, one nearby resident remarked, the fabric eventually is replaced. That has been the only sign of activity on the property.