DOES HANDWRITING MATTER IN THE DIGITAL AGE? 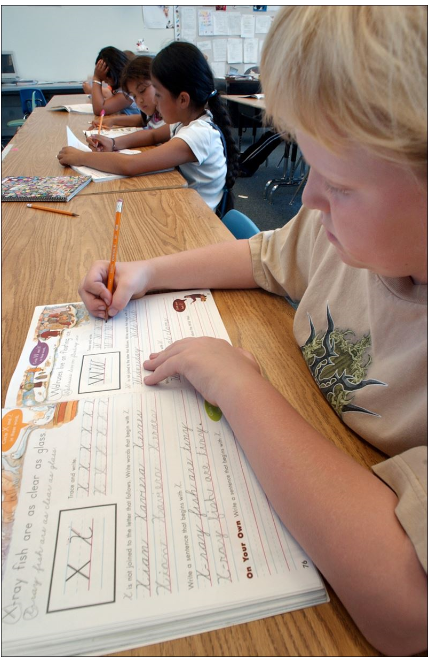 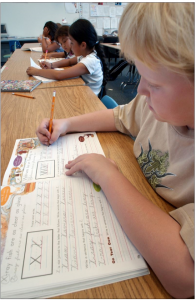 A debate rages over whether or not to continue teaching cursive handwriting in America’s schools.  With focus now on computing, texting, tweeting and the like, maybe all a child needs is to learn how to print. According to ABC NEWS, 41 states no longer require cursive writing to be included in their curriculum.  Administrators in these states feel instruction in cursive has gone the way of the dinosaurs, and classroom time would be better spent on teaching keyboard skills.

Not so—reports Concordia University Online—a Journal of news and resources for teachers. This journal takes the stand that cursive writing should be taught in schools, and it gives a multitude of reasons:  cursive develops fine motor skills because it uses hand muscles in a unique way.  Cursive develops a different skill set than the act of writing in print, furthering motor skill development.  MRI’s have shown that writing in cursive activates a different part of the brain, a fact that aids in increasing retention. Cursive is considered to be faster than printing, an important factor in taking accurate notes.

Supported by research, Concordia University has concluded that cursive not only reinforces learning, it also helps students with disabilities, especially those with dyslexia. The University takes the position that cursive is an art form all its own, an art form which also connects students to the past. To quote from 5 Reasons Cursive Writing Should be Taught in School, if cursive is left out of the curriculum, “not only will students miss out on a part of history, they may very well miss out on reading important letters and cards from their grandparents or great-grandparents. The older generation still writes in cursive on a daily basis. Kids often rely on their parent to translate these letters and cards for them because they cannot read the cursive writing. 40 years from now, when these grandparents have passed on, kids may want to look back on those letters, and they should be able to do so.”

And then there are all those historical papers so carefully written in elegant script, documents such as the Constitution of the United States and the writings of Abraham Lincoln.  Idaho State Rep. Linden Batemen believes that if students do not learn cursive, they will have issues in the future interpreting historical documents. Furthermore, Batemen says: “Modern research indicates that more areas of the human brain are engaged when children use cursive handwriting than when they keyboard. We’re not thinking this through. It’s beyond belief to me that states have allowed cursive to slip from the standards.”

Many parents join Batemen in her concern. A July, 2013, Harris poll found that 89 % of adults and 89% of children, ages 8 to 18, think it “necessary to practice reading and writing in cursive.”

Opponents argue that it’s time to let cursive just fade away. In a New York Times opinion piece, Morgan Polikoff, an assistant education professor at the University of Southern California’s Rossier School of Education, had this to say: “As we have done with the abacus and the slide rule, it is time to retire the teaching of cursive. The writing is on the wall.”

Others find that position absurd and feel cursive absolutely should be taught.  In a recent Facebook debate, one parent argued: “Sure—we live in a digital age, but why should that matter? Or—if it matters—why teach how to read?  In today’s world all literature and textbook materials could simply be presented as audio files.” That position may be extreme, but it certainly makes a point.

The recent focus on cursive writing is a side effect of states signing on to teach the Common Core standards adopted by 45 states.  These standards do not include the curly looped handwriting style taught for generations to kids, age 7 – 8, in penmanship classes.  7 of these Common Core states refuse to give up cursive:  California, Kansas, Indiana, Idaho, Massachusetts, North Carolina and Utah. They all want to make sure that cursive writing stays in the curriculum

What is Sarasota’s take on this issue?  John Zoretich, Executive Director of Elementary Education has this to say: “Cursive writing does not appear in the Common Core Standards but there is an effort by some Florida citizens to have cursive writing adopted in our state’s rendition of Common Core.”

Sue Mexler, Director of Curriculum, assured me that all Sarasota children are currently introduced to cursive in the 3rd Grade, and expected to achieve mastery by the end of 5th grade. Pending upcoming legislative approval, Florida is expected to put cursive back into the curriculum, and the program name changed to Florida Standards.  Cursive will continue to be taught in Sarasota elementary schools.

In the rest of the country, however,  the debate goes on. In the digital age, is mandatory instruction in cursive a step backward, or is it a cultural tradition worth keeping? “People are just viewed as more intelligent when they can write cursive,” says handwriting expert Sheila Lowe, president of the American Handwriting Analysis Foundation.  As for the belief that instruction in cursive steals valuable classroom time from core subjects such as science and math, Lowe points out that the inclusion of handwriting in the primary school curriculum requires only 15 minutes of each school day.

In the words of Wall Street Journal columnist, Gwendolyn Bounds: “Far more than just a tool for communication, the act of writing by hand appears to be an important building block for learning.  We know about new research showing how handwriting helps with learning letters and shapes, can improve idea composition and expression, and may even aid fine motor skill development.  Ironically, it may be modern technology that gives a boost to handwriting’s resurgence.  For anyone whose kids balk at or have trouble with traditional handwriting instruction, the arrival of new educational games for the iPhone, iPod, iPad and other touch screen devices may come as a welcome teaching aid.  Kids learning to write on these devices think it’s a game.”

Sandra Wilde, a professor of childhood education at Hunter College in New York, takes the opposite position, saying that cursive writing is not an essential skill in the digital era. “A hundred years ago, you needed to have good penmanship to get a good job,” said Wilde. “Today you need to know how to use technology.  Cursive has fallen by the wayside with the realization that kids just don’t need to have good handwriting anymore.”

Indiana University neuroscientist Karin Harman James has studied the effect of printing and writing by hand as well as keyboarding in the development of children’s brains, using imaging technology to document how significant changes occur in the brain.  The research led her to believe that teaching young children how to write by hand is critical to how they eventually learn to read.

The inability to read cursive can be construed as a form of being illiterate. In the George Zimmerman murder trial, Rachel Jeantel— a childhood friend of Treyvon Martin—was forced to admit in court that she could not read a letter she had sent to the Martin family about the events of the night their son had died. That letter was composed by her but had been dictated to a friend. In court, Jeantel was unable to read it because “I don’t read cursive.”  As reported in the news, that humiliating admission sent a shocked hush through the courtroom.