After Nora, who will champion Siesta Key? 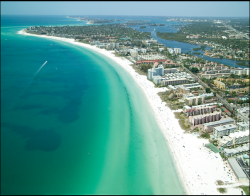 There are two challengers for her seat – both Republicans – but a third alternative exists. It’s been explored and rejected twice, but it is possible the issue of incorporation could rise again in the face of the Big Pass sand controversy? Could or should Siesta Key seize its own destiny and become a town?

It’s happened before on barrier islands up and down this coast. In fact Sarasota County is unique on the East and West coasts of Florida because the only three unincorporated islands are here – Siesta, Casey and Manasota Keys.

Immediately to the north of Siesta is Lido (part of the City of Sarasota), then the Town of Longboat Key, and then the three incorporated municipalities on Anna Maria Island (Bradenton Beach, Holmes Beach and Anna Maria). Looking south there is the City of Boca Grande, the Cayo Costa state park, then the Towns of Sanibel and Fort Myers Beach.

In each case the residents of these barrier islands believed their respective county commissions were not keeping the islanders’ best interests at heart. That led to a desire to take control of their own destinies.

A tale of two towns

The youngest of these island towns is Fort Myers Beach, which is about to celebrate its 17th birthday. In 1995 the citizens passed a referendum to support incorporation, and the legislature then enacted a law granting the city a charter effective Dec. 31, 1995.

Eight days later, the city council passed its first two resolutions. The first “approves, ratifies and confirms all prior actions taken under the authority of Florida Law 95-494 by the Council at public meetings.”

With that out of the way, the real reason for incorporation surfaced. The town’s second resolution said it would “diligently work towards adopting a comprehensive plan and land development regulations….” The Lee County Commission’s approval of high-rise condominiums on the barrier island sparked the backlash and rush to incorporate.

The Island Sand Paper of Fort Myers Beach this year reported it took “as many as eight failed attempts dating back to the 1940s” before incorporation was successful.

It was a similar rush to build condos that sent Sanibel reaching for incorporation in 1974. The charge was led by a young-but-retired CIA agent named Porter Goss. He started a weekly newspaper, championed the cause of incorporation and became the town’s first mayor. Goss ran for Congress in 1988 and was re-elected seven times. In 2004 he was confirmed as the 17th director of the Central Intelligence Agency.

Sanibel is physically separate from Lee County, connected to the mainland via a causeway. The island community supports its own police department and has a separate fire district. It offers a full range of municipal services including planning, building and recreation. By contrast, Fort Myers Beach uses Lee County public safety agencies and pays for them.

Bonita Beach is midway between Fort Meyers and Naples. It incorporated in 1999, joining the list of new Lee County towns. It now is making plans to annex property to the north near Estero. That move has sparked an incorporation drive in Estero, and supporters hope to have it on the ballot next November.

“Outside of Sanibel and Fort Myers Beach, I believe we are the third highest community in Lee County on a per capita property tax base. Right now we are just asking for the right to be able to vote on incorporation,” the newspaper quoted Nick Batos, the chair of the Estero Council of Community Leaders.

Yet another Lee County community is eyeing incorporation, and not for the first time.  Lehigh Acres is east of Fort Myers, has suffered massive flooding problems over the years and – unlike Sanibel, Bonita and Estero – is a working-class community. Twice before it has reached for incorporation, but fell short. In the past opponents cited higher taxes to support the human and physical infrastructure needed to run a municipal government.

Surprisingly Lee County Commissioner Frank Mann supports the idea. His district includes Lehigh Acres. Sand Paper reporter Keri Weeg quoted Mann saying, “You can do so much more yourselves under the umbrella of a city.”

Siesta Key has twice toyed with the idea of incorporation. The first was in the 1970s when the now-familiar condo-construction frenzy gob smacked residents into thinking maybe they could manage their own affairs better. It came up again in the 2001 after the first time Sarasota cast eyes on Big Pass sand for Lido.

“Every time, it was going to cost people more,” recalls Anne Johnson, former editor of the Pelican Press weekly newspaper. “But even if we were a town, we’d still have no control of the sand.”

The “sand issue” was strong enough to propel Jack O’Neil to beat an incumbent and take a seat on the county commission. As a former chair of the Siesta Key Association, he was instrumental in the “Save our Sand” movement. But concerns about cost of incorporation killed the idea before it got to the referendum stage.

“As soon as you incorporate, people want you do something additional, and that comes with a bill,” said Patterson. “But sometimes a particular person will arise to champion the cause.” After she steps down next November, Patterson says she will not be a champion for incorporation.

In the meantime plans go forward to use the ebb shoal of Big Pass to renourish South Lido. Depending on how the sand issue plays out, and how the political campaign evolves to replace Patterson, the idea of incorporation is an outlier. As multiple examples show, it’s achievable. But as the old saying goes, if you want something fast, easy and cheap – pick two.