Seagulls and Volleyballs sail through the air on Siesta Beach 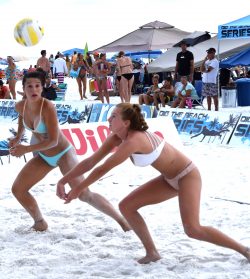 
More than 750 Pro, Amateur and Junior beach volleyball players participated in the final "Dig The Beach Volleyball Series" tournament of the season on spectacular Siesta Beach. Over $4000 of prize money was awarded to top men's and women's Pro Division winners. Adult and Junior players each have their choice of four amateur divisions as well as divisions for Pro and Co-Ed teams. Tournament Director, Diogo Sousa commented, "This tournament attracts some of the best volleyball players in the nation." "Wilson" is this year's major sponsor of the tournament providing all the tournament balls as well as a large share of the courtside signage. Tournament Director, Diogo Sousa was pleased to announce he and the athletes agreed to join the "Go Green" bandwagon by eliminating the use of plastic water bottles. They now utilize a 125 gallon filtered water tank filling station. All tournament athletes are provided a refillable bottle. By doing this they will cut the use of nearly 150,000 plastic water bottles per season.

Founded in 1991, the Dig the Beach Series is the longest standing and largest series of its kind in the United States. The Dig the Beach Volleyball Series is the most established and successful grassroots series of its kind. Since 1992 they have catered to both professional and amateur players. This tour has graduated some of the top professionals on the Domestic & World Tours. Annually the series makes 8 stops throughout Florida from April through August. Each tournament features 2 person teams in Adult & Juniors divisions. "We have created and developed the largest Junior’s Program in the U.S., totaling over 200 hundred Juniors teams at some events. Our Junior’s Program consists of children ages 18 years old and younger, and caters to both boys and girls." This program involves the parents, family members, and friends. "We have created a platform that has created the visibility for close to 40 young women to get scholarships to play Sand Volleyball in College. We will continue to grow the visibility for the young women to be seen as potential college players," Sousa said. (Source help: www.digthebeach.com)