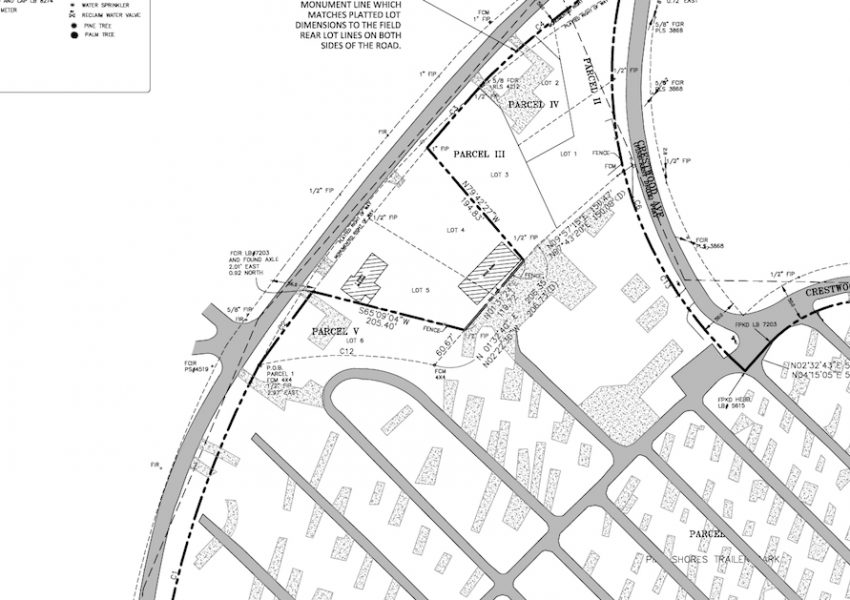 An earthmoving permit application involving the site of the proposed Siesta Promenade project remained under county staff review as this issue of Siesta Sand went to press.

Formally filed on May 1, the application from Siesta 41 Associates LLP, an affiliate of Benderson Development Co., had notations of insufficiencies as of mid-May in regard to the required Tree Protection Review, the History Center Review and the Air & Water Quality Review, the county’s Permitting Division records showed.

Further, the Stormwater Division and Environmental Specialist reviews remained open as of the afternoon of May 15.

The Permitting records noted that the purpose of the work would be to clear the property on the northwest corner of U.S. 41 and Stickney Point Road, where the mixed-development project would stand. On Dec. 12, 2018, the County Commission approved the Siesta Promenade proposal on split votes. Both Commissioners Nancy Detert and Charles Hines opposed the requested rezoning, which will allow Benderson to construct 414 condominiums/apartments, a 130-room hotel and 140,000 square feet of retail and office space.

The application said impervious structures and septic tanks would be removed from the approximately 24 acres, where a mobile home park stood for decades.

One county staff stipulation noted that Siesta 41 Associates also would have to obtain a permit from the Florida Department of Health in Sarasota County “prior to any septic abandonment” and that the work must be “conducted by or under the direct supervision of a Florida Licensed Septic Contractor or Licensed Master Plumber.” That stipulation was added by Matthew Miller of the Health Department staff, the notation says.

In regard to the Tree Protection Review, county staff member Darren Semones wrote on May 8, “Removal of pads and roads can occur without the need for tree removal.” That information underscored comments Semones made in an April 24 letter to Siesta 41 Associates’ representative, Clint Cuffle of Water Resource Associates (WRA) in University Park, as a follow-up to discussion that was part of the county’s April 18 Development Review Committee (DRC) meeting.

Cuffle appeared at that DRC session to discuss how Siesta 41 Associates could best proceed with the site clearing.

In fashion similar to Semones’ notation in the Permitting records, County Archaeologist Steven Koski reprised statements in the April 24 letter in his comments. He pointed out that the demolition plan must include information about the preservation of the Pine Shores Clubhouse chimney, “so the demolition contractor is aware there is an avoidance area around the chimney until it is relocated.”

John McCarthy, former director of what was then the county’s Parks and Recreation Department, explained that the clubhouse was constructed of logs, making it an unusual building in the county. A fire destroyed the clubhouse, he said, but the chimney was saved.

Koski added in his notation, “The relocation plan [for the chimney] and methodology must be submitted to Parks, Recreation and Natural Resources (PRNR) and Historical Resources (HR) for review and approved prior to proceeding with the move; coordinated with the point persons with [PRNR] and HR.”

Koski also pointed out that costs incurred under the mitigation plan would be the responsibility of Benderson Development or Siesta 41 Associates.

Litigation begun in early January in an effort to halt the construction of Siesta Promenade was a topic of discussion during the May 2 meeting of the Siesta Key Association (SKA).

President Catherine Luckner welcomed as a special guest Ralf Brookes of Cape Coral, who is handling the Petition for Writ of Certiorari filed on Jan. 11 on behalf of Sura Kochman, a resident of Pine Shores Estates, which would be the closest neighbor of Siesta Promenade.

Typically, Brookes explained, construction of a project will not begin until after litigation has been completed.

After reviewing some of the facets of the legal case, Brookes told the approximately 60 audience members that he would imagine oral arguments would be set for either late summer or early fall — the August/September/October timeframe.

It could be the winter, Brookes added, before the hearing is conducted, as “the courts are very, very busy.”

Still, he pointed out, the Siesta Promenade case has such a high profile, he anticipates the judge will opt for an earlier schedule rather than a later one.

It appears the case may be heading on a longer track, after all. On May 16, exactly two weeks after Brookes made his comments to the SKA audience, the attorney for Benderson and Siesta 41 Associates filed a motion with the court, saying that the two companies, the county and Brookes had agreed on an extension to June 24 for Siesta 41 Associates, Benderson and the county to file their responses to Kochman’s petition. The responses had been due by May 17.

Generally, when all parties are in agreement, the presiding judge will grant such a motion.

During the SKA meeting, Brookes also addressed the earthmoving application, saying he attended the April 18 DRC meeting, when that process was proposed to Cuffle of WRA.

An earthmoving application, Brookes pointed out, normally is submitted by someone working on a farm or in some type of agriculture-related business. He does not believe such an application is appropriate for the clearing of the Siesta Promenade property, he added.

Questions also have been raised about the person who serves as facilitator of the DRC meetings, Robert “Bob” Schmitt of Land Planning Associates of Lakewood Ranch. Brookes indicated that Schmitt was the one who proposed the earthmoving application idea.

Land Planning Associates’ website says the firm “is proud to represent landowners and developers with assistance in obtaining approvals of anything relative to land use permitting. … Most work is related to rezones and other conditional land use approvals in Manatee County, Florida.”

The website notes that Schmitt worked in Manatee and Sarasota counties for more than 30 years, most recently as Manatee’s zoning official.

In response to questions, Matt Osterhoudt, director of the county’s Planning and Development Services Department, said that Schmitt, who works for a temporary employment firm called Ad-Vance has been facilitator of the DRC meetings “for some time.”

Osterhoudt stressed that Schmitt’s firm does not work in Sarasota County.