County to improves signs on land development and public hearings 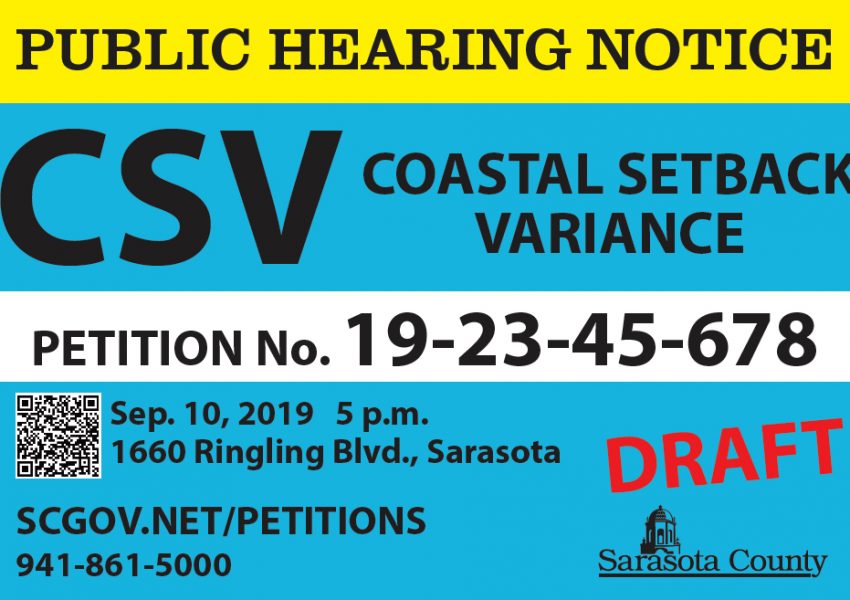 At various times in recent years, Siesta Key residents have complained about the inadequacy of signage Sarasota County staff uses to identify properties that will be the focus of public hearings.

The county’s Unified Development Code, which contains all the land development and zoning regulations, included no specifications for design of the signs, or their size, Michele Norton, manager of the county’s Planning and Zoning Division, told the County Commission during its regular meeting on July 8. Determinations about those features was left to administrative staff, she added.

Norton showed the board members a typical sign, noting, “It is my understanding this has been the sign used for quite some time.”

At 2 feet by 3 feet, she continued, “It is handwritten … by the project planner.” County staff orders the signs and charges the expense to the applicants for the hearings, she added.

As a result, the Planning and Development Services Department staff undertook research into best practices in regard to design, clarity, scale of lettering for visibility, and size options, to find out whether the county could improve the effectiveness of its signage, a staff memo explained.

Norton credited that effort to Jacob Hunt, who, as a Florida State University student, was an intern at the time with Planning and Development. Since then, she said, he has become “our newest long-range planner.”

As a result of Hunt’s research, Norton continued, the consensus among Planning and Development staff was to improve the look of the signs.

She unveiled four new examples for the County Commission, explaining that each would be 3 feet by 3 feet and “professionally printed for clarity.” As in the past, she noted, the applicant would pay the expense of the new signs.

Among other features, she pointed out, the petition number for the project at the heart of an upcoming hearing will be enlarged. Further, a different color scheme will be used for each type of hearing — a rezoning, a Special Exception petition, a Comprehensive Plan amendment proposal and a request for a Coastal Setback Variance.

Another new feature will be the inclusion of the county webpage where all the details will be available about the application: www.scgov.net/petitions. That page has a map on which a person can click to bring up a number of details about the application, Norton said. Moreover, the full array of materials will be available on a list on the right of that page, she noted.

Each sign also will have a QR code that a person can scan with a smartphone, for example.

Finally, the webpage offers direction to email Planner@scgov.net for more information about an application, if a person desires extra details.

“We’re continuing to finalize the design templates,” Norton told the board members. (Each design she showed them was marked with the word “Draft” in red.)

The July 8 staff memo provided to the board members said, “The large letters and specific color [palette] for each petition type should over time create a recognizable County sign that alerts neighbors and passers-by” that the property where the sign stands will be the focus of a petition coming before the commission. “These improvements also take the safety of the driver and other members of the public [on foot or in vehicles] into consideration,” the memo pointed out.

“We look to implement this new sign transition in the fall of this year,” Norton told the board members.

Staff will be working with the county Communications Department, she pointed out, to ensure members of the public are aware of the changes.

Additionally, staff is engaged in making improvements to the active petition’s webpage, to provide more transparency to the members of the public in regard to applications for land development changes.

“Can we make sure we’re tracking the QR codes?” Commissioner Christian Ziegler asked, so staff can determine how many people end up scanning them.

“I’m just curious what the signs are really doing,” he added, if that tracking would be possible.

“Perhaps we could implement some community surveys,” Norton responded.

No board action was needed that day, Norton told Chair Michael Moran as she concluded her presentation.

In advance of the July 8 meeting, the commissioners received a copy of the report staff completed as a result of the research into signage in other communities.

Such signs, the report said, offer the first opportunity for many residents to learn about proposed land use changes in their community.

In regard to visibility, the report noted, “The California Institute of Technology has produced a table … that provides a scale of letter heights and the distance at which they are readable and the distance where they have the greatest impact. A good rule of thumb for maximum visibility is one inch in letter height for every 10 feet of distance.”
The report acknowledged that the largest lettering on the Sarasota County signs that have been in use is 2.5 inches, while most of the letters “are less than one inch high.”

“The other aspect of sign design that impacts visibility is color,” the report pointed out, especially in terms of contrast. “The most visible combination is black/yellow with combinations becoming less and less visible as the contrast increases,” the report said.

Although Sarasota County staff uses black lettering on a yellow background, the report continued, such signs — as well as those with black lettering on orange backgrounds — can resemble road warning or construction site signs. “These connections to safety signage,” the report pointed out, “could make the public ignore the notice, fear that the change is dangerous, or think that the information on the sign has already been decided on and their input is not needed.”