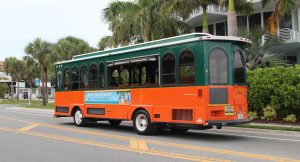 Since the free Siesta Key Breeze trolley was launched on March 20, county commissioners have joined representatives of island organizations in lauding its effectiveness. In recognition of its high ridership levels, Sarasota County Administrator Tom Harmer has assured the County Commission and the public that the circulator will continue to circulate well beyond the Aug. 11 ending date for the initial pilot program.

“We believe we can extend it for at least another six months,” Harmer reported during the board’s May 26 budget workshop. “It will give us a chance to put together a funding strategy for long-term stability of the route,” he added. “We’re optimistic that we can do that.”

Mark Smith, a Siesta Key architect who is chair of the Siesta Key Chamber of Commerce, pointed out during public remarks that the extra six months would keep the trolley running until Feb. 11, 2018. He added, “Valentine’s Day historically is the peak of the season, so I can’t tell you how popular you all will be if the trolley stops at the same time that we have our maximum amount of visitors on the Key. … I urge you all to keep this trolley going, forever and ever, amen.”

Running on a constant loop from Turtle Beach Park on the southern end of the Key to Siesta Village, the trolley operates seven days a week from 8 a.m. to 11:59 p.m., including holidays. The cost per revenue hour is $73.95, according to figures provided to the board for the workshop. That puts the annual expense at $1,066,174.

When Commissioner Michael Moran asked whether staff had consulted with the Florida Department of Transportation (FDOT) about further funding for the trolley, Harmer replied, “That’s all in process right now.” As for the amount of state financial support the county might win, Harmer noted only, “We’re not anticipating zero. … I think there’s a lot of interest in the route at the state level, as well. Everyone sees how popular it is.”

Not only is the service free, but Harmer also noted that all a person has to do is flag down the vehicle to catch a ride if the person is between the regular stops.

Referring to the annual expense of the circulator, Commissioner Nancy Detert pointed out, “Sometimes, for a million bucks, you’re getting 5 million dollars’ worth of good will and just a happier experience.” She continued, “I would really kind of support keeping it free for at least another full year, till people get used to it and appreciate it. Then, if it becomes too much money, we look at charging people.”
Still, Detert pointed out, charging riders entails its own set of problems, including the need to make change. “It just becomes a very complex [issue].”

“For right now,” she said, “anything free in today’s world is a lovely surprise. We do cater to tourists and vacationers and want them to have a good experience while they’re here.”

“Commissioner Detert said what I was about to say and said it very well,” added Commissioner Alan Maio, who represents Siesta Key in District 4. “We don’t always do everything right,” he said, noting that members of the public readily point to things they feel the board and staff do not handle well. The Breeze, he continued, “washed away heartburn. It was a tsunami of heartburn being washed away.”

Maio praised Sarasota County Area Transit (SCAT) staff for the way it had worked with representatives of Key organizations who long had called for an open-air, island-atmosphere trolley. “It’s just been an enormous thing.”

Drawing laughter, he added, “Even with my sense of embellishment and exaggeration, I would never come up with the actual ridership numbers that independent people are giving us. They are phenomenal.”

Figures provided by SCAT showed that from March 20 through April 30, the total number of riders was 58,478.

Maio further concurred with Detert about wanting to see the service remain free, at least through the six-month extension of the current contract.

Staff may have to re-advertise the bid for the service, Harmer explained, but extending the current contract for six months will allow staff to work on the details of a longer-term agreement. The latter can include tweaks to the route, he indicated.

Smith of the Siesta Chamber stated in a May 30 telephone interview that he remains hopeful the trolley’s route can be broadened to encompass stops on Higel Avenue, with the Breeze eventually traveling into Siesta Village from both the north and south.

Applause for the county’s action

During the telephone interview, Smith reiterated the positive impact the service has had on island traffic. The Siesta Chamber board recently committed another $5,000 to marketing for the Breeze, he said; it earlier provided $5,000 for banners, signs, buttons and even videos for Facebook and YouTube to promote the service.

In the May 30 interview, Smith also talked of how dreams of a trolley service dominated many discussions at Siesta Key Village Association (SKVA) and Siesta Chamber meetings through the years. (The SKVA was absorbed by the Chamber at the end of 2016, after SKVA members approved the action that fall.)

Long-time directors of the Village Association lobbied for decades to see the trolley become a reality. The creation of the Breeze, Smith added, “has been almost a Holy Grail type episode.”

Moreover, Smith said, “It’s always important in any endeavor with government … that you have someone champion the cause, because you just need someone that can make a couple of phone calls and nudge folks … and Commissioner Maio has been that. We’re extremely grateful for it.”

The other commissioners this time have proven “very supportive,” too, Smith noted. “It really hasn’t been a hard sale.”