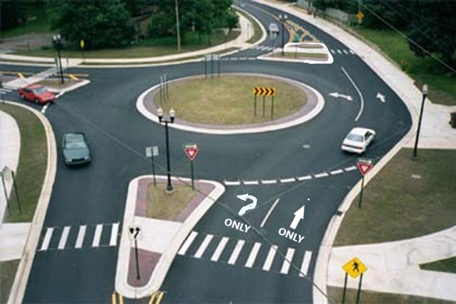 Sarasota County’s Public Works Department director readily acknowledges that Siesta Key residents “weren’t all falling all over themselves” in May when he revived the idea of a roundabout at the intersection of Midnight Pass Road and Beach Road.

However, Spencer Anderson told the County Commission on Sept. 22, “Some of the major stakeholders” on the barrier island in the spring “were receptive to the idea.”

That was a big change, he pointed out, from their view in 2015, when the Florida Department of Transportation (FDOT) initially proposed a roundabout near the entrance to Siesta Public Beach.

“To my mind,” Anderson added, “there wasn’t any negative opinion about it” in May that would keep county staff from undertaking more public outreach.

Five years ago, he said, when FDOT first broached the idea as part of a planned resurfacing project set for 2022, “The public input … was not supportive of a roundabout.” However, he continued, people then were not as familiar with that type of intersection design.

The roundabout was the top choice of three proposals FDOT was considering, Anderson added. The other two, he pointed out, were a no-build option and improvements to the signalized intersection.

In the spring of 2022, Anderson continued, FDOT plans to resurface the portion of Midnight Pass Road from the Stickney Point Road intersection to Shadow Lawn Way, which is the entrance to the Siesta Isles neighborhood. Therefore, he told the commissioners, FDOT would like to move ahead with the roundabout plans for Beach and Midnight Pass roads. If the commissioners agree to proceed on that path, Anderson added, the county would need to complete the design by October 2021, at a cost $360,000.

FDOT would cover the $1-million construction expense, he pointed out.

The project is included in the department’s Five Year Work Program, Anderson said.

Asked how soon the roundabout could be built, Anderson said that it would take “probably close to a year.”

“There’s shortfalls in roadway budgeting,” Commissioner Alan Maio said, but he indicated that if a project is included in the Five Year Work Program, that is a sign that the department is intent on undertaking it.

As part of an initiative that began about three years ago, FDOT is taking over authority of River Road between U.S. 41 and Interstate 75. In exchange, the county is assuming control of Stickney Point Road west of U.S. 41, along with Midnight Pass Road from the Stickney Point Road intersection to Higel Avenue, and with Higel Avenue and part of Siesta Drive.

Anderson noted on Sept. 22 that the “road swap” would be complete after FDOT formally files all the right of way paperwork linked to the changes in roadway authority, which is expected later this year.

As a result of the discussion, the commissioners voted unanimously to direct county staff to continue its public outreach efforts, which Anderson has been pursuing since then. Among those steps, staff launched a survey that was live during October to gather comments about the proposed roundabout. The results, staff said, would be presented to the commissioners this month.

Additionally, Anderson and Carolyn Eastwood, director of the county’s Capital Projects Department, made a presentation to about 40 members of the Siesta Key Association (SKA) on Oct. 1. Anderson showed them a number of slides, which illustrated improvements that could be made to the signalized intersection, in lieu of a roundabout.

Most of the attendees’ comments were focused on the high pedestrian use of the Beach Road/Midnight Pass Road intersection.

SKA President Catherine Luckner told the SNL that if island residents believe pedestrians will be safe trying to get through that intersection with a roundabout in place, then their support of the proposal will increase.

“I just don’t see it,” she said. “I don’t think [SKA] members can see it either,” she added, referring to a roundabout’s functioning smoothly for people on foot as well as in vehicles.

As of Oct. 6, Mason Tush, chair of the Siesta Key Chamber of Commerce and a member of the family that owns CB’s Saltwater Outfitters, said Anderson had not contacted Chamber leaders about meeting with them.

During the late spring, Tush added, he did participate in a Zoom session with Anderson, when Anderson broached the revival of the roundabout proposal.

Tush did note one concern, which long-time Siesta Chamber Director Mark Smith also pointed out to the SNL in a separate telephone interview: If traffic backs up on Midnight Pass Road because the Stickney Point Road drawbridge is open, “What happens at the roundabout?” as Tush put it. Will the motor vehicles just stop in the roundabout, Tush asked.

That is an issue that county staff will have to consider, Tush and Smith pointed out.

Smith also concurred with Luckner about pedestrian safety, noting that many visitors park at St. Boniface Episcopal Church, which is located at 5615 Midnight Pass Road, and then walk over to Siesta Public Beach. Those pedestrians use the crosswalks at the Beach Road/Midnight Pass Road intersection, he added. “Can [they] manage the roundabout in a safe manner?”

Worries on the Key

Roundabouts are “the one issue that’s always 50%,” Commissioner Christian Ziegler said during Anderson’s discussion with the board members. “[People are] passionate on both sides.”

Commissioner Charles Hines noted that signalized intersections are more expensive to maintain. Moreover, he said, “Safety is better [with roundabouts].” The vicinity of the Beach Road/Midnight Pass Road intersection, Hines added, “is a dangerous area where people like to go fast. [A roundabout] slows them down, [and], aesthetically, it’s a lot prettier.”

Anderson noted that not only have roundabouts proven themselves safer than signalized intersections, but they also entail about 25% less “points of conflict,” as he put it, between vehicles and pedestrians.

“The public mindset has really changed on roundabouts,” Commissioner Nancy Detert pointed out. In general, she said, roundabouts “[speed] up traffic, of which there is much … on that [Siesta Key] road.”