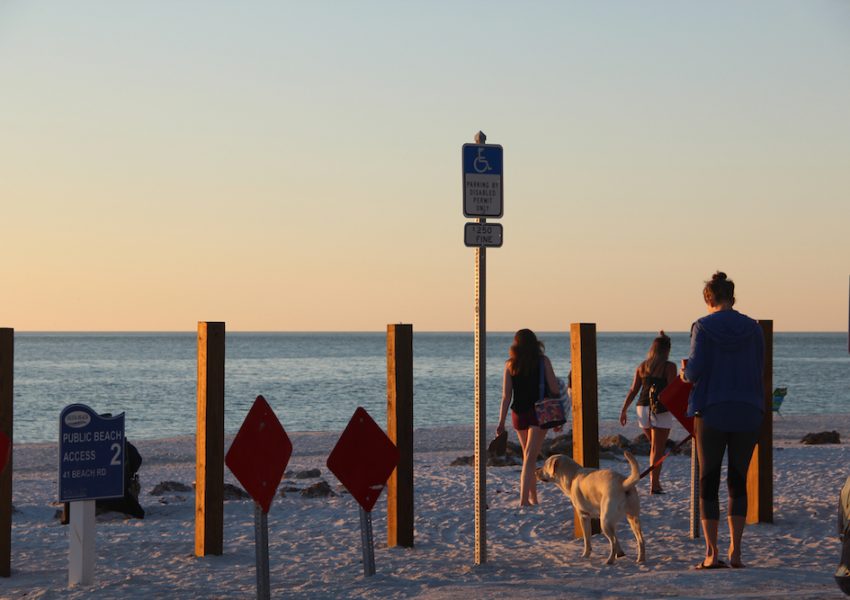 Following a presentation by Sarasota County Administrator Jonathan Lewis and two county department leaders, an audience member who identified himself only as Rod explained that he had been coming to Siesta since 2006.

Signage, reflecting county regulations, says, “No dogs on the beach,” Rod told Lewis. Yet, at Beach Access 2, around sunset, “There’ll be at least 20 dogs on leash …”

Some of them defecate on the beach, Rod continued. And no one from the county confronts the owners, he added.

The sign at that access — as at all beach access points on the Key — clearly says, “‘No dogs,’” Rod reiterated his opening remark. “Is there any way they can enforce that?”

“The sheriff will do it when he thinks it’s appropriate,” Lewis responded.

“That is our challenge,” Nicole Rissler, director of the county’s Parks, Recreation and Natural Resources Department added of the effort to keep dogs off the county’s beaches. “We have a great relationship with the Sheriff’s Office,” she stressed. Still, she acknowledged, “We know that’s an ongoing issue.”

Not only are complaints common from visitors to Access 2, she indicated, but also from people at Beach Access 1, which is at the western end of Shell Road.

“We don’t have the ability or mechanism to enforce that [county prohibition regarding dogs on the beach],” Rissler added of Parks staff.

“If they would show up at sunset at Access 2, it’d be a real eye-opener,” Rod told Lewis and Rissler.

“Sometimes we put rules in place [in an effort to curb certain behavior],” Lewis replied, but enforcement problems can occur.

Lewis asked for Rod’s opinion about the idea of county staff members making bags available at Access 2 for dog owners to use in cleaning up their pets’ waste.

“That’d be like putting ashtrays in a ‘No Smoking’ zone, right?” Rod replied.

“There are certain behaviors that are difficult to curb,” Lewis said.

Audience member Michael Shay then pointed out that Sheriff’s Office deputies have given out citations to owners with dogs on the beach. “But you have to make the phone call [to report a problem].”

Lewis suggested that Rissler could talk with Sheriff Tom Knight about ensuring deputies check on the situation at Access 2 on occasion. “Sometimes even intermittent enforcement can help.”

“It’s a health issue, if nothing else,” Rod told Lewis. “At least [officers’] presence might do something.”

The past and the present

For decades, Siesta property owners and visitors referred to the area around Beach Access 2 as “dog beach.” It was a common gathering place for people and their canine companions.

Then, on Dec. 11, 2007, the County Commission approved an ordinance that not only prohibits dogs on the beach but also enumerates a number of other illegal activities. That ordinance has been amended periodically through the years for various reasons. Nonetheless, Section 33 of Chapter 90 of the Sarasota County Code of Ordinances still says, “Unless otherwise noted, the following conditions, uses, and activities are prohibited on … Siesta Key Beaches from Palmer Point Park to the municipal limits of the City of Sarasota: [Article 2] “Dogs, cats, and other pets outside of areas specifically designated for activities involving such animals, except for dogs trained to assist or aid disabled or handicapped persons when such dogs are actually being used to assist or aid such persons. Any dog, cat or other pet found in violation of this section may be impounded and held in accordance with provisions of the Sarasota County Code of Ordinances.”

Sgt. Paul Cernansky, who took over as leader of the Sheriff’s Office’s Siesta substation last fall, talked about Article 2 in a telephone interview.

“We enforce [it] as appropriate,” he said. “I’m just trying to keep things as simple as possible.”

A kiosk at each beach access on the island — including Access 2 — makes it clear that dogs are prohibited except as provided for under Article 2, Section 33 of Chapter 90 of the County Code.

One primary reason, county staff has explained, is to protect the beach-nesting birds on Siesta Key, including the endangered snowy plover. If startled by dogs — even with eggs close to hatching — the birds will abandon a nest.

A more recent situation at Access 2 may be confusing visitors and new residents unfamiliar with the county regulations.

In early September 2016, Siesta resident Mike Cosentino purchased the property at 10 Beach Road, adjacent to Access 2. His property is easily identifiable because of the groin that juts from it into the Gulf of Mexico.

Before Cosentino acquired the property, Sgt. Cernansky told SNL, the other owners of the private lots between Access 2 and Access 3 had stipulated to the Sheriff’s Office that they wanted deputies to keep dogs off their property, as if their land were part of the public beach.

Cosentino took a different view, Cernansky said. Cosentino has a dog, Cernansky added, so Cosentino allows other dogs on his property at 10 Beach Road.

Nonetheless, Cernansky emphasized, if an officer determines that a public safety or health hazard exists, the officer will act on that.

However, he said, “A dog under control is not a health hazard in general.”

Summing up the situation, Cernansky said, “Dogs are allowed on Cosentino’s property, but nowhere else. … He’s chosen for us not to enforce [the county ordinance on his parcel], and as a property owner, that is his right.”