Commentary – Saving one beach to destroy another? 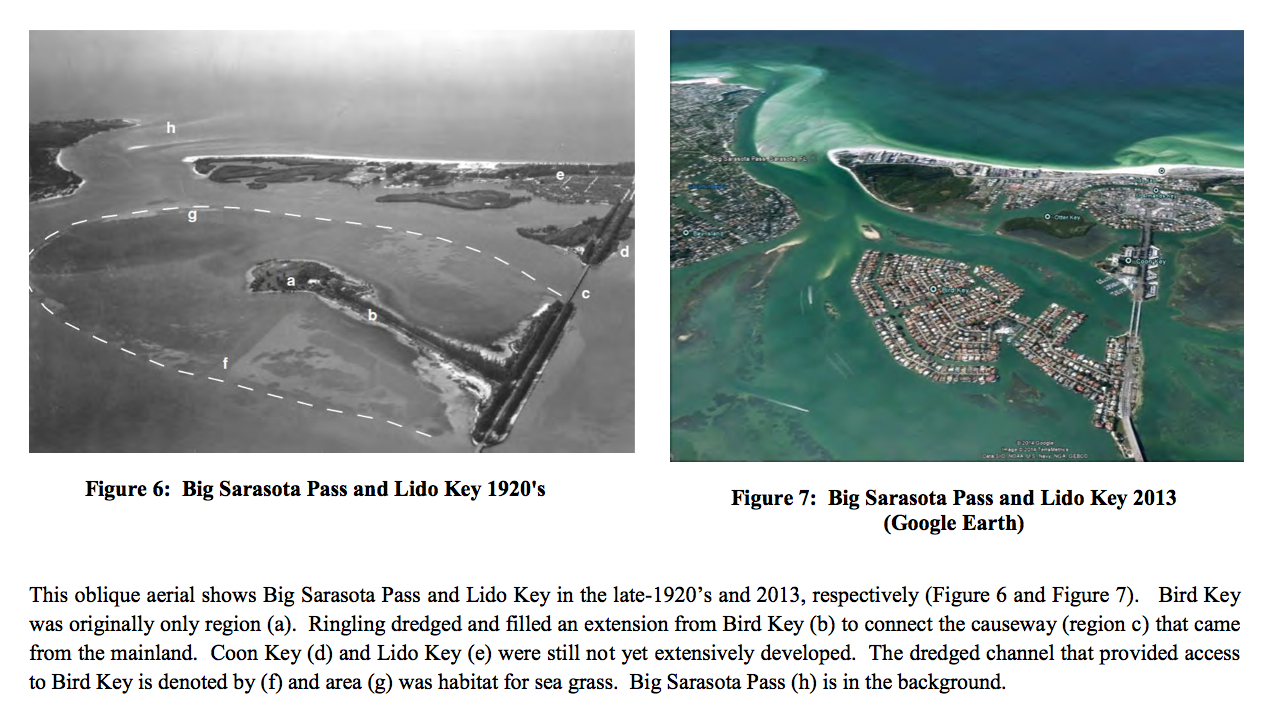 I wrote this commentary back in early 2018, but thought it necessary to update and republish it.

“Those who cannot remember the past are condemned to repeat it.”

Siesta Key is a very unique island, one of the few islands throughout Florida with public beaches that never needed renourishment.

As we await the ongoing court rulings of challenges to the City plan to dredge and borrow 1.3 million cubic yards of sand from Big Sarasota Pass to nourish Lido beach. I thought it wise to look how well government intervention worked out for the southern part of Siesta Key, Turtle Beach.

An excerpt from the book An Illustrated History of Siesta Key: The Story of America’s Best Beach

The 500-foot-wide, 13 feet deep tidal inlet that became known as Midnight Pass was crucial in promoting estuary water flow/mixing and ensuring a passageway for fishing boats. Even more important, the mangrove forests along the shorelines ensured an ecosystem that maintained water quality and clarity, filtering pollutants and trapping sediments originating from land, while providing essential habitat for fish.

However, disruptions by dredging began as early as 1895 to fulfill the vision of an Intracoastal Waterway … the last stage of dredging operations during 1962-67 was more destructive, culminating in migration and later closure of Midnight Pass. It is likely that the Bay’s shellfish habitat was destroyed then as well.

In December 1983, two property owners on the southern part of the Siesta Key — Pasco Carter and internationally acclaimed artist Syd Solomon — were alarmed that their homes were precariously close to tumbling into Midnight Pass. Their only hope, they decided, was to relocate the waterway. On Oct. 4, 1983, they won permission from the Sarasota County Commission to do that. Then in December 1983, they brought in bulldozers and closed the channel, according to a timeline provided by the nonprofit Midnight Pass Society.

As members of the Society wrote in a publication they issued a decade later, “State officials hastily blessed the plan [with] no environmental impact studies, no baseline data, no water monitoring, no administrative hearing and no engineering review to improve chances the plan would succeed.”

The publication continued, “The senseless act all but destroyed the historic environment, the ecosystem that once was Little Sarasota Bay. … Vast and vibrant seagrass beds once teeming with life have been devastated, breaking the chain of life that existed here for as long as we know. The numbers and diversity of fish have been severely reduced, and all of the clams have been killed.”

A former SKA director who served for many years with the organization — and a longtime member of the Midnight Pass Society— Bob Waechter addressed about 80 people during the January 2017 SKA meeting.

Referring to the Midnight Pass situation and the City of Sarasota/U.S. Army Corps of Engineers plan to remove sand from Big Pass, Bob Waechter said, “this is what happens if you don’t stop them before they do it.”

Before Midnight Pass was closed, Waechter continued, “we had all the assurances as a community from the permitting agencies: ‘This is going to work just fine.’ We didn’t know that there was a knife in their hand when they said that.” He added that the proposed Lido project is proof of Spanish philosopher George Santayana’s famous quote, “Those who cannot remember the past are condemned to repeat it.”

About 10 people attending the January 2017 SKA meeting at St. Boniface Episcopal do remember what has happened since December 1983, Waechter added. As a direct result of the closing of Midnight Pass, he continued, the county has had to help pay for two renourishments of South Siesta Key’s Turtle beach. (The most recent undertaking was completed in late April 2016, at a cost of approximately $21.5 million. The first — completed in 2007 — cost about $11.2 million.)

During a November 2015 presentation to SKA members, Laird Wreford, the county’s coastal initiatives manager, also talked about how the closing of Midnight Pass had exacerbated the situation on south Siesta. When the pass was open, Wreford pointed out, “sand was still being somewhat held in” on the southern portion of the Key. “You didn’t have that same rate of erosion on Turtle Beach and south Siesta [as seen today].”

During the January 2017 SKA meeting, Waechter told the audience that, among other impacts of the closing of the pass, the benthic creatures in Little Sarasota Bay died off, “to be replaced by another environmental community but a much inferior environmental community.” (“Benthic” refers to the lowest level of a body of water. Organisms living in that zone — including crustaceans — are an important part of the food chain, scientific research has shown.)

In 1994, Waechter explained, “the county came around to our way of thinking,” in large part because of the efforts of Nora Patterson, who served on the County Commission for four terms before having to step down in 2014 as a result of term limits. Prior to that, she was a Sarasota city commissioner for eight years. Patterson also lives on Siesta Key.

Sarasota County spent $1 million in a fight for the state permits to reopen Midnight Pass, Waechter told the audience. State environmental officials required the county to undertake “all the studies and the engineering reports that they didn’t do [before the pass was closed].” The state agency that was the predecessor of the Florida Department of Environmental Protection (FDEP) even insisted that the county undertake an Environmental Impact Statement (EIS), Waechter said. “Unfortunately, we were fought to a standstill.”

“The state ultimately refused to grant the county permission to reopen the pass”, he added.

If the U.S. Army Corps of Engineers (USACE) and the city are allowed to dredge Big Pass once, he pointed out, “you will never get them to retreat.”

Former Commissioner Patterson told the SKA members that when the USACE announced that Big Pass would be its primary sand source for the Lido project, the County Commission asked why it did not seek other sources before it dredged “a pass that had never been dredged. Their answer was that the nearest sand source was miles away.”

The USACE’s response, Patterson continued, “sort of inbred, especially for those of us who have been here a very long time on Siesta Key and in Sarasota … a certain distrust of really quick answers from the Army Corps.” She added, “It’s hard to trust folks once they’ve fooled you.”

As noted above, Turtle Beach has been renourished twice since Midnight Pass closed at a cost of $32.7 million. Oh, by the way, property owners by the beach are hit with a renourishment fee on their annual property taxes to help pay for the renourishments, something the Lido folks will not have to pay.

It’s all about the money for the city of Sarasota. At an annual cost of about $21 million to do each harvest of Big Pass, the Federal portion is about 62%, $13 million, with the last portion split between the state and city, going on for the next 50 years. Without the federal dollars the city would have to carry a bulk of the costs.

During the Administrative Hearing, Army Corp and FDEP staff verified that neither the ACOE nor a municipality (city) can be held liable for damages as a result of a project such as the Lido Beach renourishment.

“I am still shocked at how our request for an EIS [Environmental Impact Statement] by two jurisdictions above us … was just dismissed,” Maio said on Nov. 5, during the County Commission’s regular meeting. “People can couch that response however they like,” Maio continued, “but our request was just dismissed.”

How many millions of dollars will be spent by Siesta Key residents protecting the north end of the key with continuously replacing new seawalls?

Will this affect tourism to Siesta Key? Siesta Key has been the golden goose for the area.

How will the Big Pass eco system change, since this will happen every 5 years never allowing a healing process?

What will be the financial impact on the boating community and business with the sand bars destroyed?

What will the north beaches look like on Siesta Key?

Will Siesta Key beaches to the north end of the island be like the south end and every other island in Florida, waiting for beach renourishment? Something so special will be destroyed.

As noted by Nora Patterson, there are alternative harvesting sites along with mined sand inland.

We need to stop this before it gets started. Stop history from repeating itself. If you care about Siesta Key, please donate to the Siesta Key Environmental Defense Fund. This is charitable and fully tax exempt. Please go to www.Siestakeyassociation.com and donate.