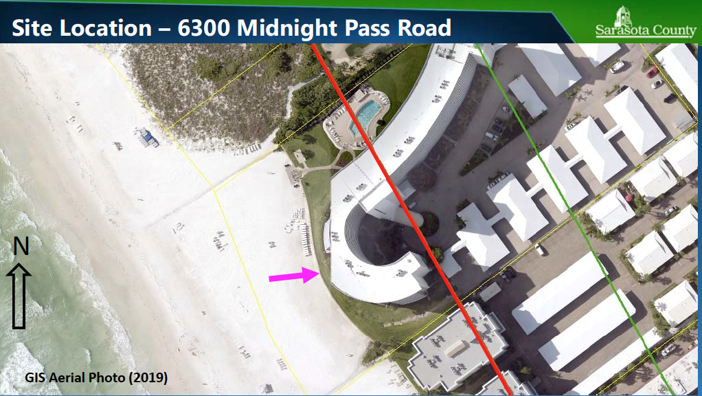 In addressing the latest request for a Coastal Setback Variance on Siesta Key, Sarasota County Commissioner Nancy Detert acknowledged, “I’m kind of swimming upstream here, because it’s almost unanimous that this is a simple thing.”

She was referring to a lack of questions from her colleagues on Feb. 5 after they heard presentations regarding the Crystal Sands Owners Association’s desire to install a 315.5-foot-long, vinyl sheet pile retaining wall 6 inches in front of a concrete retaining wall that has been deteriorating on their property.

The association’s proposal would place that new wall about 141 feet seaward of the county’s Gulf Beach Setback Line (GBSL), which is its figurative line in the sand designed to protect property owners from storm surge and similar coastal events.

Built in 1970, Crystal Sands is “the closest of any property on Siesta Key to the waterline,” Mike Sullivan, a 50-year-long owner of a unit at the complex, told the commissioners.

When the concrete retaining wall was due for maintenance, county Environmental Specialist Staci Tippins explained during her Feb. 5 presentation, the Crystal Sands Owners Association discovered “that there was more damage than they had expected.”

The new wall, she added, would stand 202 feet landward of the Mean High Water Line.

Showing the board an aerial photo taken of the front of the complex, taken in June, Tippins pointed to the “large expansive open, sandy beach [about 200 feet wide].”

Nonetheless, Detert said, “I philosophically have a problem with people who are in front of the [GBSL] by hundreds of feet, and then they want a variance because they’re having a problem. Well, surprise, surprise.”

“We do have environmental policies that I don’t think probably any of us have studied all that closely,” she continued.

In response to questions from Detert, Tippins pointed to criteria staff reviewed in preparing the materials for the Feb. 5 public hearing. One of those criteria says, “The requested variance is the minimum necessary to permit reasonable use of the property.”

In demonstrating inconsistency with that policy, staff explained the following in a table provided to the board ahead of the meeting:

• “The project results in perpetuating the hardening of the shoreline with a vertical retaining wall. Hardened shorelines adversely interrupt the natural coastal processes of sand transport and storage in the beach and dune systems.

• “The Petitioners could obtain a staff administered [Water and Navigation Control Authority] WNCA Permit to remove the existing concrete wall and replace it to the same design, location and dimensions without the need for a Coastal Setback Variance.”

Tippins added that staff had suggested to the association that it focus on dune restoration seaward of the wall, parallel to the neighboring condominium complexes.

“If they did a dune restoration, would they have to tear down the existing wall?” Detert asked.

“Not necessarily,” Tippins told her. The property owners could use that structure as a stabilizing feature behind the dune, Tippins added.

“What we’re seeing — and we have more than one barrier island — is people build where they probably shouldn’t,” Detert said. “And then their building’s threatened [and] they come back to us for relief. … So this is the muddle we get into. I think the best way to avoid this is to maintain our own rules and regulations.”

After Detert completed her remarks, Commissioner Alan Maio made the motion to approve the request for the variance, and Commissioner Christian Ziegler seconded it. “These tend to be difficult to do,” Maio acknowledged of petitions for Coastal Setback Variances. “This is an easier one, I think,” he continued, as Crystal Sands has hundreds of units. “They built the way they probably were allowed to build back then.”

The motion passed 4-1, with Detert casting the “No” vote.

More details of the proposal

A staff memo provided to the board in the backup agenda material explained that Crystal Sands “is a multi-family condominium … The parcel on which Crystal Sands is built extends from Midnight Pass Road to the Mean High-Water Line (MHWL) and has a width of approximately 300 feet.”

About 15% of the developed portion of the site is located seaward of the GBSL, the memo added. The complex is divided into two areas, the memo continued: One is developed with a 12-story structure containing 132 units; the other, with 22 single-story villas.

“The subject property has no coastal setback variance history,” the memo pointed out.

The new vinyl sheet pile wall — which the memo explained is “a type of Shore Protection Structure, as defined by the [county’s] Coastal Setback Code” — will have a concrete cap, which “will include reinforcing steel, corrosion protection and tiebacks.”

The memo also noted, “The proposed retaining wall has not been designed as a typical seawall shoreline protection structure … to protect against wave action …” Instead, the memo continued, the wall would serve “a more aesthetic upland retaining wall role to demarcate the boundary between the developed areas of Crystal Sands and the open sandy beach …” It also would serve as a means of preventing upland erosion, the memo said.

“The gap between the existing wall and proposed wall will be filled with washed stone or concrete,” the memo added.

During remarks to the board, Steve Wickens, past member of the Crystal Sands Association board, explained to the commission, “The means and methods that we propose are significantly less intrusive than excavating and removing the existing wall and rebuilding it.”