Celebrating the seasons on Siesta Key 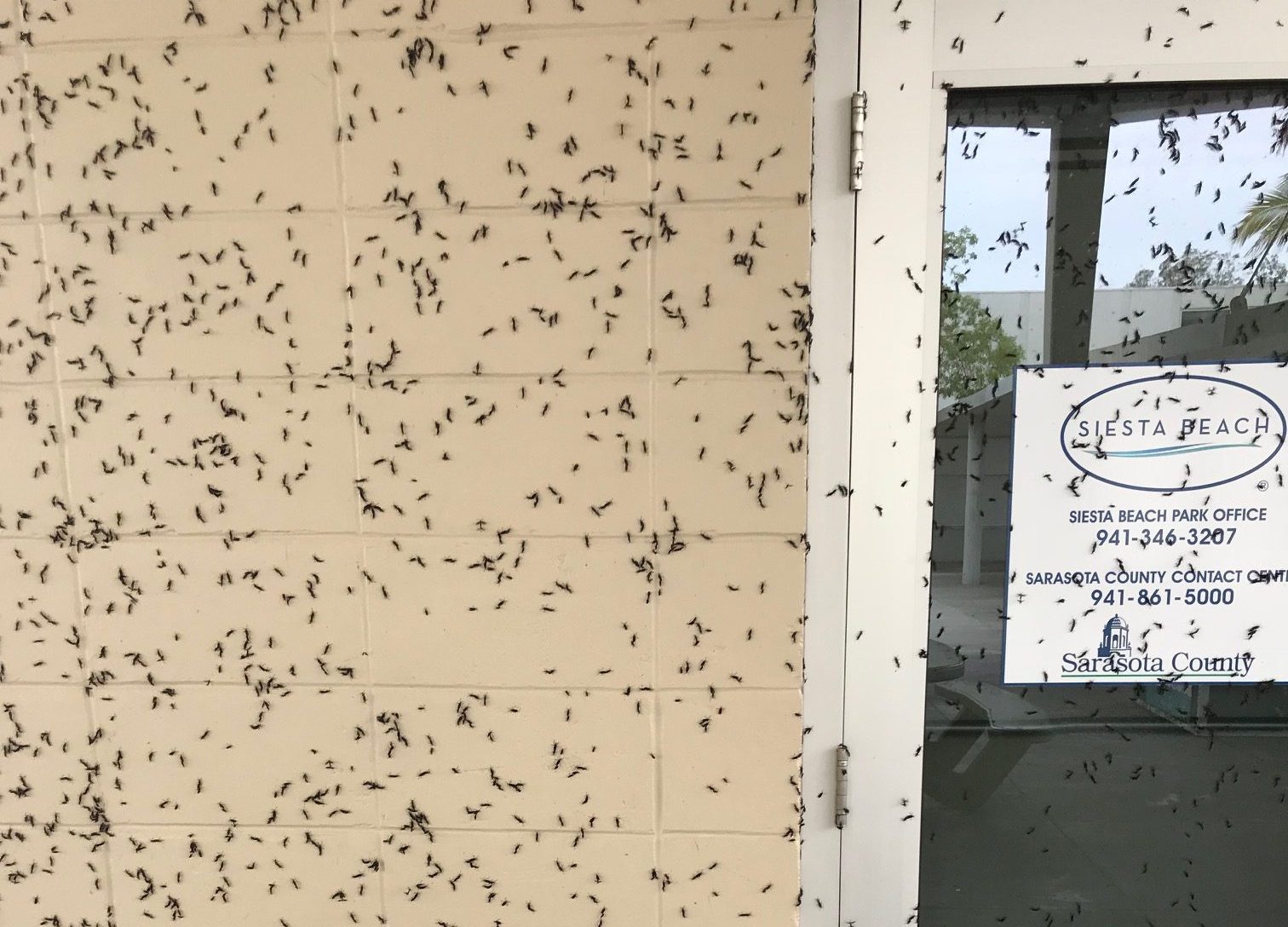 We laugh affectionately whenever residents survive their first year here in the sunshine state absolutely and positively convinced that Florida only has two seasons: hot and hotter.

Being a transplant myself, hailing from the state where folks are proud to call themselves “Cheeseheads” and where Lambeau’s “Frozen Tundra” is arguably considered the football capital of the world, I’d like to set the record straight.

Here on the Gulf Coast we actually do have four seasons; it’s just not called spring, summer, fall, and winter, down here.  Instead, Siesta Key residents refer to our seasons as Lovebug Season, Hurricane Season, Snowbird/Tourist Season and Spring break Season.

This past May was an exceptionally bad season for these brazen little hordes of plecia nearctica.  Luckily, their time for making whoopee was short-lived thanks to the heavy rains that came through in mid-May.

These marsh flies filled the air with unbelievable mass.  They seemingly came out of nowhere, paired up and started their mating ritual in plain view and everywhere.  Note of caution: they are especially drawn to light colors so if you happen to own, say, a light colored car, good luck trying to get into it without at least a handful following you inside.  You do have a choice though, you can either gently shoo them out through the window as you speed away or watch helplessly as they copulate in front of you, behind you, beside you and who knows where else.

Per Wikipedia: Lovebugs do not swarm, but congregate in thousands. [Almost sounds like a church revival.]  The slow, drifting movement of the insects has been described as almost reminiscent of snow fall except that, unlike snow, the flies also rise into the air.  [Poetry in motion?] Adult females live only three to four days, while males live a little longer.  [That certainly would explain why they make the most of their time together.]

A word of advice: if you happen to find yourself in their midst, unless you are wearing some kind of protective mouth covering, it’s best not to smile and keep your mouth closed…remember, they are drawn to light colors.

June 1st starts the next season for Siesta Key, Hurricane Season, which runs through November 1st.  Peak season is around the first week in September.

According to the Colorado State University’s Tropical Meterology Project, the 2018 hurricane season will be above average; however not as severe as the 2017 season.

On September, 2017, Hurricane Irma passed 35 miles to the east of Sarasota.  Although the damage included large downed trees and no power for some Siesta Key residents, the island was spared a direct hit.  This was our first exposure to any kind of hurricane.  We made peace with what was to come and counted ourselves among the lucky ones when we returned finding no damage to our property and working electricity.

According to HurricaneCity.com, Sarasota was affected by 16 hurricanes dating back to 1888, the worst of which took place on September 18, 1926 with winds of 120mph, but it does not differentiate between a direct hit or hurricane-force winds.

Now I’d be remiss if I didn’t bring up the “Urban Legend” of a mysterious protection from hurricanes credited to an Indian princess or blessing.  After our brush with Irma, I’d like to believe there is something to this legend.

Tourist Season begins November 2nd and runs through May 1st .  It picks up again in June when school lets out and the locals head to the beaches.  It’s also the time Europeans will frequent our area.

Tamiami Trail starts to fill with drivers unfamiliar with the rules of the road.  In Sarasota, although you are allowed to make a U-turn at most intersections, it is still illegal to make a right turn from the far left lane.

Most know that this season coincides with the colleges having their spring break. Island businesses love this time of year – island residents, not so much.  During this period of time you want to make sure your off-island trips are timed between bridge openings. What normally would be a 5 minute drive to get off the island, could take 45 minutes longer.

Oh the perils of living where other people vacation. I truly love living on Siesta Key. I accept the four seasons of Siesta Key – all of them…well, if Lovebug Season is as bad as this one, I may have to rethink my all-inclusive embrace.