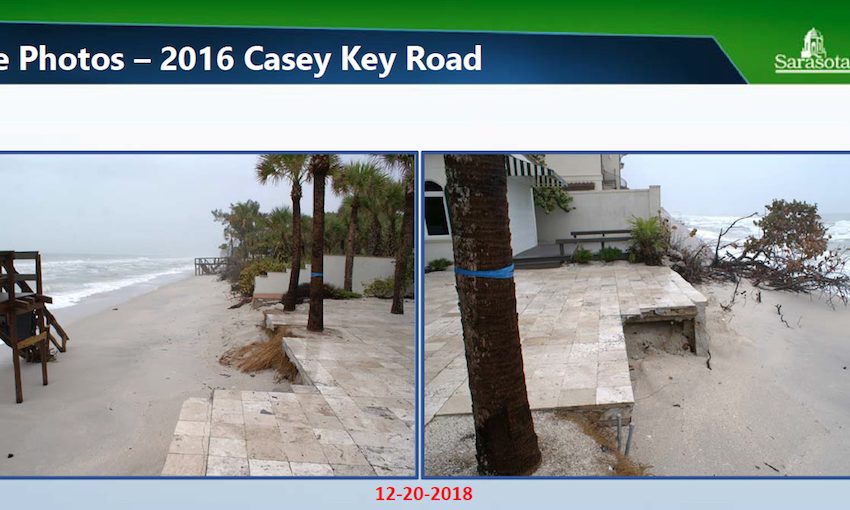 It was only the fifth time in Sarasota County history that staff had brought to the County Commission a petition for a Coastal Setback Class II Emergency Variance, Environmental Permitting Manager Howard Berna told the commissioners on Jan. 29.

After hearing from staff and one of the petitioners, plus supporters of the latter’s plans, two of the commissioners almost spoke in unison as they tried to make a motion to approve the request.

“We’re going to fight over you now,” Commissioner Nancy Detert told Joey and Tracie Langston of 2016 Casey Key Road, after Commissioner Alan Maio let her make the motion. Maio seconded it, and it passed unanimously.

As Berna explained to the board, the Langstons were requesting the variance so they could repair the damaged part of a concrete retaining wall and a paver deck on the Gulf side of their property on Casey Key Road. They also planned to connect the wall to the new section of concrete deck slab, using reinforced steel rebars.

Berna reminded the commissioners that a Class II Emergency Variance “is intended to be a rapid response to structures that are at great risk caused by recent storm events.”

The granting of such a variance makes it possible for a property owner to take “temporary storm protection measures,” Berna added.

Last year, he continued, the commissioners granted such a variance to another set of Casey Key Road property owners so they could stabilize a cabana on the shoreline, as it was at risk of collapsing. Unlike that recent case, he said, “This would not require a regular variance at a later date, because this is replacing what was there.”

Showing the board an aerial image, Berna explained that the Langstons’ property is midway between the Blackburn Point Road Bridge and the Albee Road Bridge.

The Langstons’ house, on the bay side of Casey Key Road, was constructed in 2010, Berna noted. On the west side of the road, the couple has a cabana, the concrete paver deck, a wooden deck and the retaining wall, which dates from the 1970s. Additionally, a dune walkover structure was constructed in 2005 through a process that staff was able to handle on an administrative basis, Berna said.

The retaining wall is only about 83 feet long, he continued, while the Langstons’ shoreline encompasses approximately 200 feet. The rest of the shoreline is natural, Berna added.

In 2018, the Florida Department of Environmental Protection included that section of Casey Key’s beach in its list of critically eroded beaches in the state, Berna pointed out.

Showing the board a series of slides, Berna explained that the retaining wall first began to separate from the concrete slab of the deck. A staff memo in the board’s agenda packet noted that in March 2018, “a strong cold front caused more than 10 ft. of dune erosion at this location.” On July 25, 2018, the Langstons applied for the Class II Emergency Variance, the memo said.

Further details of the project

As county staff members have explained in past public hearings, the GBSL is the figurative “line in the sand” beyond which new construction generally is prohibited, so native vegetation can keep the shoreline as stable as possible during storms, protecting construction landward of the GBSL.

Berna characterized that as “a fair amount of activity,” telling the commissioners he considered the information “rather important to share with you.”

Finally, Berna explained, before granting a Class II Emergency Variance, the board needs to determine that the proposed action will minimize impacts to the coastal systems. “Should erosion trends continue in this area,” he said, tidal action could result in the scouring of the toe of the retaining wall. That, in turn, could result in adverse impacts on sea turtles and lateral pedestrian access along the beach, he added, as well as possible disruption of the natural movement of sand from north to south on the shoreline.

Speaking for himself and his wife, Joey Langston told the commissioners, “Despite the fact that nature has not smiled on us, we are anxious to get this [damage] repaired. We seek not to add. We seek simply to repair and restore what was there previously.”

“We have a significant investment on Casey Key Road,” Langston added. “We love it there.”