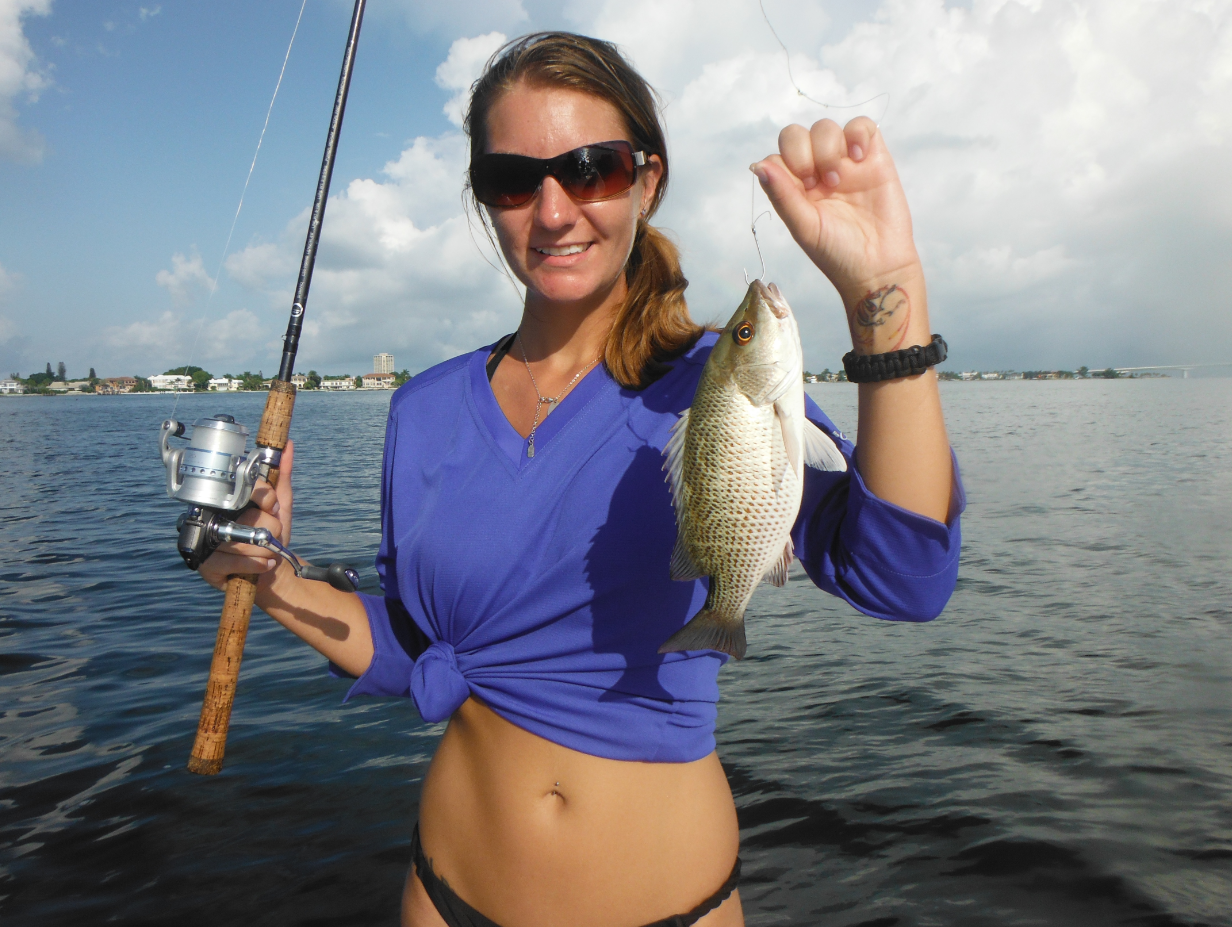 There is a little secret here in Sarasota; the fishing is terrific in August!  Many anglers assume that the heat slows down the action, but this is far from true.  The reality is that

due to daily rain showers, the water temperature is actually lower in August than it is in June.  Hordes of bait fish cover the flats.  This combination results in excellent conditions for anglers to succeed.  The best action will be early morning, late afternoon, and at night.

Snook love the infusion of fresh water into the bay.  Phillippi Creek, South Creek, Hudson Bayou,  Big Pass, New Pass and the Venice inlet are all good spots to cast a plug in search of snook as they migrate back into the bays after spawning out on the beach.  Shallow diving plugs such as the Rapala X-Rap are very effective baits.  They cover a lot of water and produce explosive strikes.  Scented soft plastics also work well.  Live shrimp, pinfish, and pilchards will also catch a lot of snook, particularly once the fish are located.  Outgoing tides at first light and in the evening are the best times to fish.

The deep grass flats on the north end of Siesta Key will be good spots to target speckled trout.  High tides in the morning will produce plenty of fish.  Spanish mackerel, pompano, bluefish, ladyfish, jack crevelle, sharks, small gag grouper, and mangrove snapper will also be caught by anglers drifting the deep grass.  A live shrimp under a popping cork works very well.  A jig with a grub tail is the preferred artificial bait but plugs and spoons are also effective.

The bars form CB’s Saltwater Outfitters at Stickney Pt. south to Blackburn Pt. will hold some very nice trout.  This area does not get a lot of pressure in the summertime.  This is an early morning bite and a high tide is preferred.  Any oyster bar that drops off sharply from shallow water into four or five feet with grass is a likely spot.  Live shrimp work very well either free lined or under a cork.  Rootbeer/gold and olive/red Cotee jigs are productive lures to cast.  Redfish and snook will also take a bait that is intended for a big speckled trout.

In the last several years mangrove snapper fishing has been outstanding!  Grass flats that drop off into deep water with some current flow should produce plenty of nice snapper this month.  Live bait works best and baitfish will usually catch larger fish than shrimp.  A 1/0 live bait hook tied on a 24” piece of 20 pound  flourocarbon leader with just enough split shot to get to the bottom is the simple but effective rig.

Tarpon will still be an option in the inshore Gulf, but their numbers will be diminishing and they will not be “showing” like they do earlier in the season.  Live pinfish floated out under a cork at Point of Rocks will still produce a fish or two.