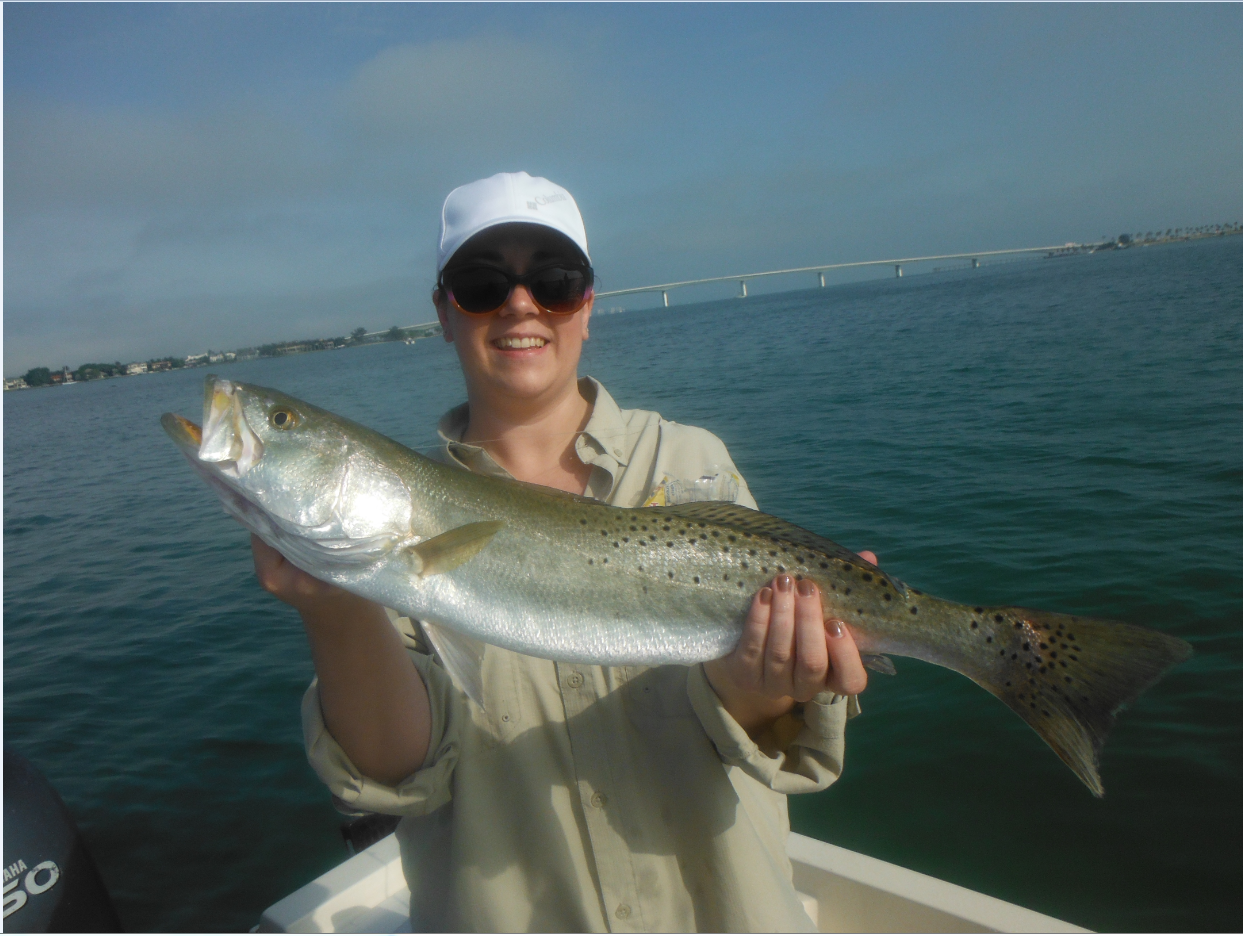 July fishing can be excellent, but tactics need to be a little different and windows of opportunity are smaller.  It is simply too hot to fish in the middle of the day.  Early morning will be the most reliable time to fish, evenings are good too, but frequent thunderstorms can make planning a trip difficult.  Anglers who don’t mind fishing in the dark will have success at night, and they will beat the summer heat!

Action on the deep grass flats from the north end of Siesta Key should be very good for speckled trout, along with bluefish, Spanish mackerel, ladyfish, pompano, and jacks.  A high tide in the morning is favored for anglers to drift the flats and cast Cotee jigs, Rapala plugs, spoons, and live shrimp under a popping cork.  Netting up a bunch of shiners and chumming the deep flats will usually result in non-stop action.

The flats and oyster bars south of CB’s Saltwater Outfitters at Stickney Pt. down to Blackburn Pt. will hold some nice trout in July, and that area gets very little pressure in the summertime.  The key is water temperature; if it is too high the bait and gamefish will not be there.  Redfish and snook will also cruise the bars and shorelines in search of prey.  Areas that drop off quickly into three or four feet will be the most productive spots.  A hand picked shrimp is deadly fished early in the morning on a high tide.  Anglers choosing artificial lures will score with topwater and shallow diving plugs, scented soft plastics, and weedless gold spoons.

Redfish will begin to school up in July and can be caught in very shallow water  The largest trout also prefer shallow water, so don’t be surprised if a “gator” intercepts an offering meant for a redfish.  These fish should be released unharmed, they are the female breed stock and are crucial to a healthy trout fishery.

Night fishing will be exciting and productive in July.  Lighted docks and bridges attract glass minnows and shrimp, which in turn attracts the gamefish.  Snook are abundant, but trout, reds, jacks, ladyfish, and snapper will also be caught at night.  Live shrimp works very well free lined in the current with little or no weight.  A 24” piece of 25 lb. flourocarbon leader and a 1/0 live bait hook is the basic rig.  Lures will also catch fish, but can be difficult to cast at night.  Fly fisherman will score with a small white snook fly such as the Grassett’s Snook Minnow tied on a #4 hook.

Tarpon will still be plentiful in the Gulf of Mexico, although the anglers will not be.  The large schools will have broken up, and although the fish don’t show as well, they eat better.  Pinfish and crabs drifted out 6 feet under a cork at first light will catch tarpon in July.  Point of Rocks on Siesta Key is a proven spot to fish.