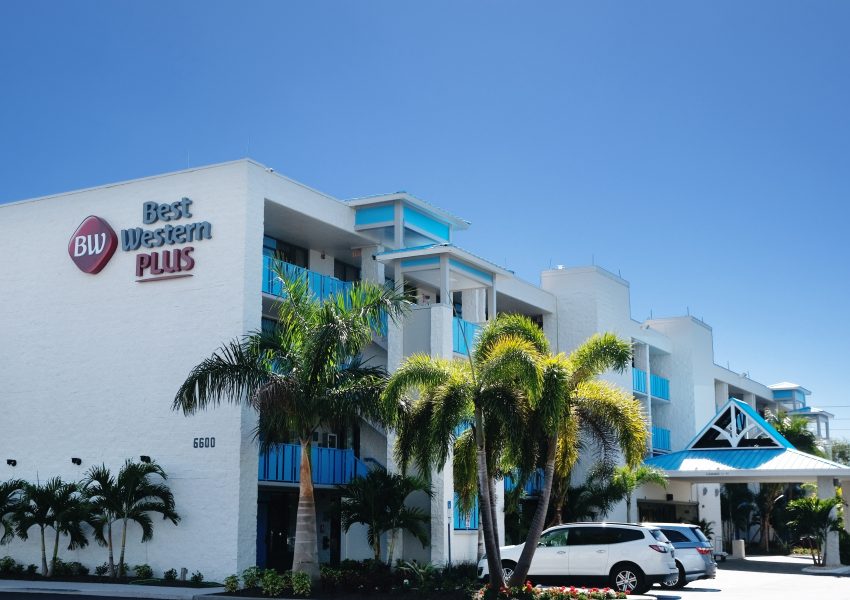 As workers at the Best Western Plus, on the corner of U.S. 41 and Stickney Point Road, put the finishing touches on some of their most recent renovations, owners Maria and Ed Bankemper are looking forward to showing off the result of years of construction.

Before their family bought the well-located property in 2007, Maria was operating Cruise Connection, a bus-to-cruise ship company founded by Maria’s parents back in 1987.  After they sold the company in 1999, she stayed on and ran it for another seven years for the new owners. Eventually, they decided it was time to leave and move on to something new.

“We had started looking at hotels to buy well before we left the company,” Maria said. “This property was a Holiday Inn Express at that time and was in disrepair and needed a lot of work. After we bought it, we invested a whole lot of money just to get it running again.”

Of the 120 guest rooms, more than 30 of them were inhabitable at the time and didn’t even have air conditioning. Most of the case goods (beds, dressers, credenzas) were also unusable.

When the Bankempers took it over, they were first tasked with trying to come up with a branding solution. In the condition it was in, the property was not really attractive to any of the major hotel franchise companies, but in researching options, Maria and Ed figured out that once they completed most of their renovations, Best Western Plus would be a good fit.

Maria said that the company would require them to keep up a level of standards but would also give them the autonomy they needed to bring some local flair to the property.

“Because of where we are located, we decided to go with a coastal theme,” she said. We wanted to make it feel different than you would normally feel walking into a hotel like this.”

The property is within biking or walking distance to the beach, so Maria says she wanted guests to know that they were near the beautiful Gulf of Mexico. The couple painted the exterior blue and renovated the guest rooms to include art from local tropical artist Shawn McLoughlin. The headboards of the beds are even adorned with a cloth print of one of his paintings featuring sea oats.

In the lobby is a comfortable breakfast bar and by the large pool is a firepit and the Sand Dollar Pool Bar. Around the pool area is where there is a firepit and live entertainment four days a week, which the public is welcome to come and enjoy.

“The concrete in the entire front has been ripped out and pavers installed, and the building has been completely repainted,” she said. “But the outside railings were also mitigated with blue panels. Putting those panels in there just sort of brought it all together.”

Guests will also appreciate the new state-of-the-art wireless internet and hot water systems that the Bankempers have installed, as well as the bicycles kept on site to use for a five-minute ride to the beach, and free shuttle service to Siesta Key, if preferred.

As a lifelong resident of Sarasota and longtime business owner, Maria said one of the most important things to her family is giving back to their community. That’s why they are heavily involved with the Siesta Key Chamber of Commerce (Maria has served on the board for eight years) and the Siesta Key Crystal Classic Sandsculpting Festival, of which Maria has been the director for the past seven years.

The Best Western Plus serves as point for the festival, hosting the competitors for the duration.

In the future, the family may add some other properties to their hotel portfolio, but for now, Maria said she’s just happy with the way this one is shaping up.

“We’d like to expand our back area, and maybe put in an even larger resort-style pool,” she said. “But we’re just very fortunate to have a huge property here, and to be able to bring something here that is unique.”

Locally owned and operated by the family partnership M&M Lodgings LLC, the Best Western Plus is located at 6600 South Tamiami Trail, in Sarasota, just east of the Stickney Point Bridge. For more information, visit the website at www.bestwesternsiestakey.com or call 941-924-4900.